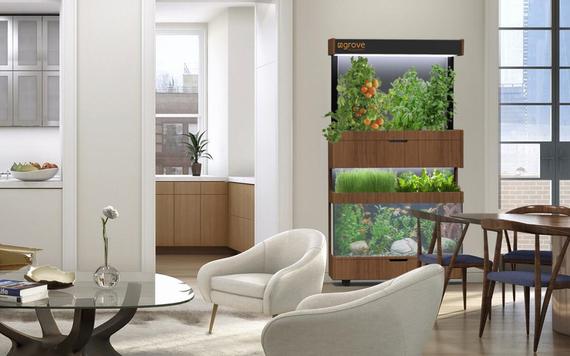 Food is reaching new heights -- literally. The vertical farming movement is bringing agriculture to the tops of skyscraper greenhouses, and NASA is taking it up into space. As the global population continues to rise, and the demand for food increases, scientists, engineers and farmers are tasked with developing new ways to increase agricultural yields. Here are four innovations that could redefine global food production.

Freeze-dried ice cream is so 1990s. These days, astronauts are dining on fresh greens grown in space-friendly greenhouses. This made news headlines in August, but in fact, astronauts have been unofficially snacking on extraterrestrial veggies since 2002, when students at Utah State University's Space Dynamics Laboratory built the Lada greenhouse and sent it to the International Space Station (ISS) aboard the Russian Progress spacecraft. How does it work? Seeds are planted inside a wick-like structure embedded in a type of clay material. The clay trasports water to the roots, fans ventilate the leaves and LED lights mimic sunlight. Gail Bingham, a senior scientist at the Space Dynamics Laboratory and lead engineer for Lada, explained to Sierra by phone that the galactic garden might also be good for the mind and soul. "It's really hard on the psyches of the astronauts to live in a bare container -- the only living thing they encounter is the fungus in their armpits." The system could be useful back on earth too, for growing food indoors with a minimal amount of water.

If you've ever ordered a mushroom burger only to discover that you are a victim of false advertising, we have a meatless solution that will calm your vegetarian nerves. Recently, scientists, foodies and engineers have been working to develop a new kind of meatless meat. We're not talking about your traditional meat substitutes like tofu, bean burgers or seitan. These veggie-lovers are seeking the holy grail of protein alchemy: to turn plants into meat. One of the more successful projects, Beyond Meat, replicates the fibrous structure of animal tissue by running a blend of plant proteins and water through an industrial extruder.

The hope is that such a meat-like substance would help reduce actual meat consumption and the host of ethical and environmental woes associated with it. But if you just can't stomach the idea, try eating seaweed that tastes like bacon or fruit that has the texture of pulled pork instead.

What's farming without sprawling fields, dawn-to-dusk hours and a not-so-healthy helping of pesticides? The answer: aquaponics, a type of controlled eco-sytem that combines fish farming and the practice of growing plants without soil. A fish tank supplies nutrient-rich water to edible fruits and vegetables and in turn, the plants filter the water for the fish. Aquaponics can be utilized on a small or large scale to produce a diversity of high-yield crops while saving on water, energy, labor, soil fertilizer and pesticides. It's also low waste and can be used in droughts and places with limited food supplies or poor soil quality. Because aquaponics doesn't require soil, a portable farm system can be set up almost anywhere, including abandoned lots and unused rooftops.

You can even have an aquaponics farming system in your living room. Grove Labs is developing a web-connected, in-home farming appliance that can sit along side your bookshelves. Invented by MIT students Gabriel Blanchet and Jamie Byron, the ecosystem will be available for purchase in Spring 2016. "Aquaponics is a fascinating and sustainable method for producing healthy food with minimal impact and effort," Blanchet told Sierra. "We believe aquaponics will play a critical role in sustainably producing food in both developed and developing countries."

Vertical farming, also known as skyscraper farming, is a step above your average rooftop garden. The largest indoor vertical farm in the world, which recently broke ground in Newark, New Jersey, will produce up to 2 million pounds of vegetables and herbs each year using a combination of LED lights and soil-less growing techniques. Other vertical farms are sprouting up across the country, from Local Roots Farms in Los Angeles, California to Farmed Here in Chicago, Illinois. These multi-story farms have the potential to utilize urban spaces for growing food and increase access to locally grown produce, year round.

Official magazine of the Sierra Club