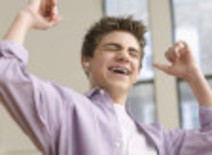 I'm sending my son off to college at the end of the summer. I'm trying not to be a wreck and hope that lots of what I taught him these past 18 years will stick. I'm also hoping that lots of what he taught me will continue to resonate in his absence. For me, there is nothing more humbling and rewarding than learning from my kids. Whether they're regurgitating my own advice (which I tend to conveniently ignore) or imparting a fresh viewpoint, I pay attention and often end up apologizing. Is it their innocent perspective or natural growing pains that makes them wise? Maybe it's the lack of filter... Here are four life lessons I've learned (and am still working on) from my teenage son:

1. It's easier and healthier to be positive than negative.

When my son turned 12, I was fixated on teaching him to stick up for himself. One afternoon while coaching him on clever comebacks to combat lunch table politics and teasing, he let me know he's not interested in my unsolicited advice. "I'd rather not spend so much negative energy trying to be someone I'm not. I'll be happier just walking away." I was floored. Who walks away? And how did he know about positive and negative energy? He explained that at the end of the day he didn't feel any better by engaging negatively and that he'd rather focus on friends who made him happy. Okay then. Maybe it was a question of my own maturity, but since, I've tried to incorporate his philosophy into my adult life. Did I mention I'm still a work in progress?

2. Be patient and give the benefit of the doubt.


Recently my son came home and casually announced that due to a cheating scandal, the entire class could potentially receive a zero on their college level math exam. Recognizing that this was no time for coherence and rationale, I panicked and blurted, "those cheaters are dishonest, unethical trouble-makers who just ruined it for the rest of you! I'm calling the school!" My attempt to commiserate and frankly vent my unchecked frustration was met with his level-headed response: "You're not calling anyone and you don't know that they're bad people. They made a bad choice. There's a difference. Let's just wait until the investigation is complete." Why was he so cool, calm and collected?!

In the end, it all worked out.

Note to self: Next time control your urge to overprotect, micromanage and generalize before losing your sh*t. At least try.

I'm just going to admit that this mantra is a tough one and took me about 40 years to start implementing. Luckily my son caught on at a younger age. After he learned how to stick up for himself with the best of them, he decided that sometimes not engaging is actually a show of restraint and virtue. He consciously decided that most times it's not worth it, and that holding back and picking your battles is more empowering than spouting off at the mouth. I've reached the same conclusion. It just took me a little longer.

"Can you put your phone down and look at me?" When your kids say this, you know you've got a problem. My partial excuse is that I'm checking work-related emails, but we all know that's crap. To hear your kid say, "I know you're busy, but I'm trying to talk to you," is a wakeup call. Got it. Shamed into submission and hoping to never repeat that mistake again (probably repeated this mistake several times before this article went to print).

There is nothing more humbling and rewarding than taking advice from your kids. Can I make myself feel better by taking credit for my son's intuitive words of wisdom? Maybe not. But I can be smart enough to pay attention. He's making good sense, so perhaps I'm not screwing up 100 percent of the time. Have your kids taught you valuable life lessons?