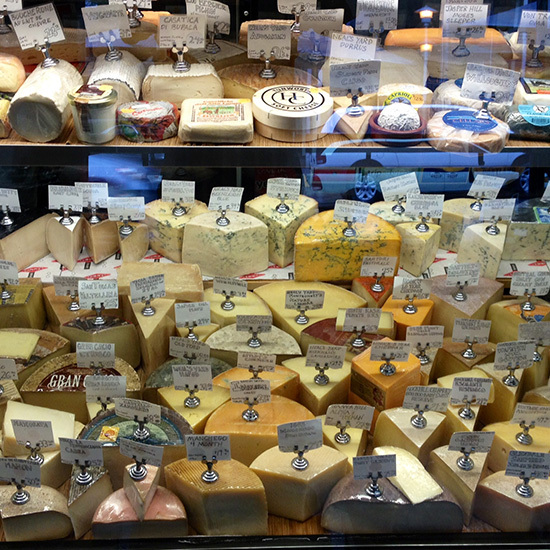 Imagine a serious sushi bar, but instead of rare raw fish they serve the world's greatest cheeses. They have paper menus and pencils to check off the cheeses you want to try, and there's even an omakase option. If that sounds fantastic (and it does to us), you should plan on visiting Portland, OR, in February. That's when resident cheese guru and Cheese Bar proprietor Steve Jones will open Chizu, his intriguing new restaurant dedicated to a carefully curated selection of his absolute favorite cheeses. The idea, Jones says, is to expose cheese lovers to the best of the best. “It’s a way to sample cheeses that might otherwise be unattainable," he says. "You might not be able to afford a whole wedge, but you can handle a 1-ounce portion for six or seven bucks."

Of course, dropping into Chizu won't be an option for every budget-minded cheese fanatic in the country. So we asked Jones to share his favorite pricey, much-lauded cheeses and their cheaper, more accessible counterparts. Here, four brilliant European cheeses and their less expensive American doppelgängers.

“It’s the Mount Everest of cheese that everyone always asks for,” Jones says. “It has a lot of smoky, bacon-fatty notes. There’s a really creamy funk to it.” A raw cow’s milk washed rind cheese, made in Switzerland and France, the Mont d’Or is highly seasonal and sold in round boxes made of spruce bark.

“This is a great American knockoff,” Jones says. “You still get a lot of the smoky, bacon fat notes, but with the Winnimere you get more of the spruce bark flavor. And there’s a real bright fruity flavor—almost like mulberries.”

“This is a new, premium goat gouda from Southern Holland,” Jones says. “Mongers are nuts for it. It’s super-super tasty. It has a big sister called Black Betty, which is a super-premium version of it aged for two years. They’re both really sweet and coconutty.”

“It’s a really nice cheese,” he says. “You get the same sweet, coconutty notes for considerably less money.”

Translated from Italian, the cheese’s name means “dunk of red beer.” “It’s an aged cheese from northeastern Italy,” Jones says. “It’s aged and immersed in barrels of red beer. The cheese itself is sweet with a nice beer-y tang to it.”

“This American take out of Wisconsin is washed in the New Glarus raspberry beer,” he says. “It is a touch fruitier, with tart, lambic notes, and it’s about a third cheaper.”

A famed Welsh cheese, Caerphilly is crumbly like cheddar but with a much more unique flavor. “It’s tangy, lactic and creamy,” Jones says. “It’s the kind of cheese that you want to eat a lot of. You just want to sit down with a beer and go at it.”

“Made in Trout Lake, Washington, the Cloud Cap is very Caerphilly-esque,” he says. “It’s a terrific take on a European classic but with more wild garlic notes coming through.”