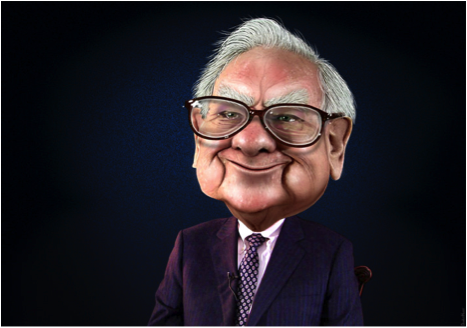 Just in case you don't know who Warren Buffett is, he's currently the third-wealthiest person in the world, behind only Bill Gates and Carlos Slim Helu. He's been building his massive $67 billion fortune since his first acquisition of a textile company back in 1962, and since then, he's grown the Berkshire Hathaway brand into a holding company that was the fourth most valuable public company in the U.S. as of February 2015.

Basically, he's somebody that you definitely need to know as an investor!

Although my investment approach is pretty significantly different from Buffett's, he's still somebody I look up to - and I recommend that you do the same. Here are four lessons that penny stock traders can take from his shiny example:

I can't claim that I'm 100 percent perfect, or that I never lose money on trades. Realistically, I only win about 75 percent of the time. But it's that mindset itself that's so important. When I work with my students, we talk about the idea of "staying in the game." If you wipe out your whole portfolio on a risky trade, it doesn't matter what your win rate is - you're out of money, and you're out of the game.

Focusing on staying in might mean missing out on trades that go on to become big, simply because they look too risky on paper - but that's the price you pay for limiting your losses. A lot of people think that penny stock trading is all that risky, but it's not. There are simple things you can do to protect yourself and predictable patterns you can follow to maximize your profits. Following these rules and being a safe trader - just like Warren Buffett - is going to pay off more in the long run.

Limit what you borrow

Buffett is famous for having a bearish perspective on borrowing money, and I recommend you follow his lead.

I see a lot of people getting involved in Forex trading because the leverage rates are so high. And yeah, it might make you feel like a big shot to be trading $1,000 in currency when you've only got $10 in the bank, but that's a huge risk you're taking on. If things don't go your way, how are you going to cover everything you owe to your broker?

I've built my penny stock portfolio from a small account of $12,415 into more than $4,305,000 in profits, and I've done it all on my own without taking on any debt. Yes, I probably could have got there faster if I'd taken out loans or put money on credit cards, but I would have put myself at an incredible risk to do so.

Now, I'm not just talking about taking on debt to finance your trading career. I'm also talking about living large while you're building your portfolio.

Despite being worth a whopping $67 billion, Warren Buffett takes the same base salary of $100,000 a year he's taken for the last 25 years. He still lives in a modest home in Omaha, Nebraska. Even when it comes to computers and cell phones, Buffett prefers to keep things simple, saying:

Success is really doing what you love and doing it well. It's as simple as that. Really getting to do what you love to do every day - that's really the ultimate luxury... your standard of living is not equal to your cost of living.

I'm probably not the best person to be giving your this piece of advice. If you take a look at my Instagram feed, you'll see that I like to post about my luxury vacations, my sports cars, and my mansion from time to time.

But while some people like to see that as me bragging, that's not the case. I don't post about those things for no reason - I post them to inspire you. What Buffett is talking about is living the kind of lifestyle you want and loving what you do. And that's what I want for my students too.

If "living simply" to you means not having to go to a job you hate every morning and enjoying a millionaire lifestyle instead, that's fine - go after it. But if all you want is to live simply with your expenses covered and your family comfortable? That's fine too. I hope that both my example of success through penny stock trading and Warren Buffett's example provide the inspiration you need to keep driving towards your goal.

I'm hearing a lot of doom and gloom thinking from people outside of my Millionaire Challenge lately. They're looking at things like Puerto Rico's default and Greece's banking troubles and thinking that the sky is falling - that the kinds of trading strategies they've been learning and I've been teaching aren't going to work anymore if we move into a bear market.

Well, guess what? I've got news for you. Not only am I not afraid of bear markets, I'm actually excited about them - and Warren Buffett is too.

Charlie and I have always considered a "bet" on ever-rising U.S. prosperity to be very close to a sure thing. Indeed, who has ever benefited during the past 237 years by betting against America? If you compare our country's present condition to that existing in 1776, you have to rub your eyes in wonder. And the dynamism embedded in our market economy will continue to work its magic. America's best days lie ahead.

In fact, Buffett is so optimistic about the future that he's instructed the trustee that'll eventually manage the money he leaves to his wife to invest 90 percent of it in an S&P 500 index fund and 10 percent in a short-term U.S. government bond fund. If that's not optimism about the future of the U.S. markets, I don't know what is.

The thing about the trading strategies I teach is that it doesn't matter what kind of a market you're in. What I do is look for patterns that tell me a stock is about to blow up or crash, and then I bet on it. And, as I said above, I'm right three out of four times. The patterns are that predictable. It doesn't matter if I'm working in a bull market or a bear market - when the patterns appear, I know I can make a profit.

Be like me, and be like Warren Buffett. Be optimistic about the future, but be cautious about the risks you take as you get there. Live simply while you're building your fortune, and avoid debt as much as possible. Take these lessons to heart, and your future will be looking very bright indeed.

What other lessons have you learned from this billionaire investing superstar? Share your favorite "Warren Buffett-ism" by leaving a comment below.