Week 3 (of a planned 12) was a harder one than the previous two have been. Harder than I was expecting - at the start anyway.

When you're not seeing results, when you start wondering what the point is, when you feel like 'giving up' (although going back to how you were eating before was clearly not the best for your health).

I'm learning to focus on the outcome I want, the result I want and -even when it feels like it's not happening - to TRUST and BELIEVE and to KEEP GOING.

So, I started the week having put on a pound.

And I knew that was going to happen at some point, as I'm weighing daily, and I KNOW it's just a number, just a fact and that my tracking that is helping me but still ... I did feel disappointed.

BEING GIVEN SANDWICHES FOR LUNCH

It wasn't helped by the fact I had a lunch meeting the next day with sandwiches provided - and I'm not eating sandwiches on my Thai-style diet.

But what can you do?

LIFE is still going to be there and throwing things at you - so what I've decided to do is NOT do what I've done previously, and just think 'oh well, I can't do it then! I might as well have ALL the sandwiches, AND the cakes while I'm at it!'.

I'm just trying to do what I can, the best I can, and not give myself a hard time about it.

So I had three little quarter sandwiches and chose chicken and salad (the mayo was out of my control) rather than cheese or ham. And I said no to the pastries and the sausage rolls. I did have a handful of crisps (because crisps are my total downfall) but I said no to the cake and ate grapes instead. I did ok.

I can't beat myself up about this - this is a huge one for me to learn a middle ground rather than being so all or nothing.

And then - on Thursday, I weighed myself first thing and ... I was 2 pounds lighter!

So, so happy. Feel vindicated that what's important is to keep going, just keep going and make conscious choices whenever you can.

And on Friday I had friends for dinner, to my monthly Tiniest Thai Salon where we talk about creativity and poetry and all sorts of good things. I was worrying about what to cook (well, what I would eat really) but then made a menu so delicious no-one knew it was 'diet' food.

We had a tom yum soup with prawns to start. Tom yum probably uses more calories to eat it than it contains! Just don't even worry about this one - it's a goodie. 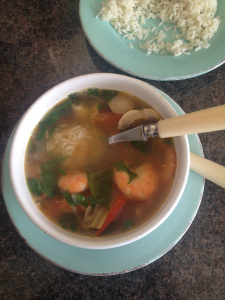 Then a Thai-style roast chicken served with rice (I had only a spoon or two of this) and a Thai-inspired salad (which doesn't have any oil at all in the dressing - and I skimped on the sugar that my own recipe linked here includes). 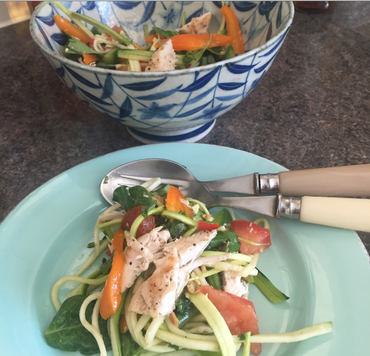 I also put out a home-made sweet chilli sauce (which looks impressive but is super-easy) as it goes perfectly with the chicken - but I was careful to only have a teaspoon myself.

But you know what? That teaspoon was actually the perfect amount now I'm being mindful and not sloshing it in without thinking.

For dessert I made a fruit salad with mango, melon, kiwi and apple - served with a sugar/salt/chilli dip. 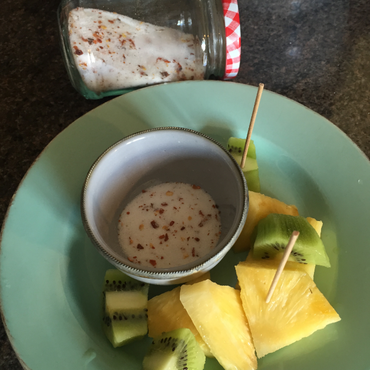 MY FAVOURITE THINGS TO EAT THIS WEEK?

Papaya with squeezed fresh lime is so delicious - and two hard boiled eggs with some salt and pepper or a drop of soy sauce are packed with protein and keep me full until lunch.

I made a really easy salad at lunch at work by taking in some chicken I'd cooked at home on the griddle the night before - with salt and pepper and ground cumin plus just ONE teaspoon of oil.

I mixed the diced cooked chicken with cucumber and spring onions and a little sliced red chilli and lots of lime juice - then spooned this mixture into little gem lettuce leaves.

It makes such a difference to me spending a little time making my food look really appetising! 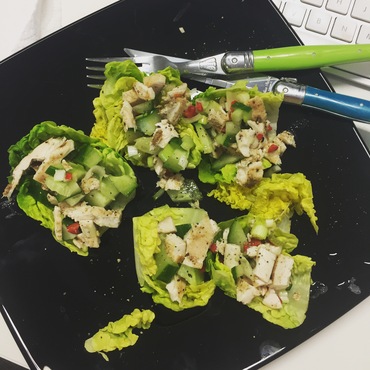 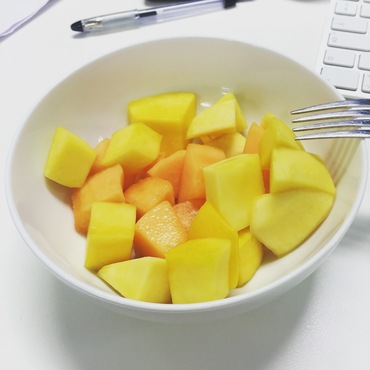 This was a good dinner.

I soaked a few dried porcini mushrooms in water. Then put fillets of sea bass in the remoska (but you could make foil parcels and put them in a conventional oven to steam and bake inside the foil) and added:

- the porcini mushrooms, taken from the water (keep the water!) and sliced (removing any tough stalks)

Cook for about 20 minutes or until done. I served it with a little rice (2 tablespoons of cooked rice is my own diet portion) and some stir fried green vegetables with chilli, garlic and a little soy sauce. 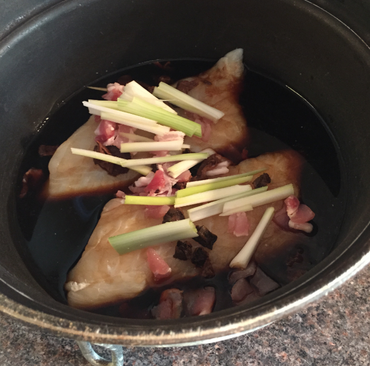 And this was a good dinner too. I had sausages in the freezer and I hate waste so diet or no diet I was going to use them!

So I made a little cut in the sausage and squeezed the meat out of the casing. Two per person.

I mixed the meat with a splash of soy sauce, a little garam masala and some flour and rolled them into little meatball shapes.

I browned them in the pan then added diced celery and garlic and stock. When cooked I added a splash of red wine vinegar and a good pinch of dried chilli flakes and we had them with rice noodles (and a veg stir fry as I had some vegetables that needed using!). 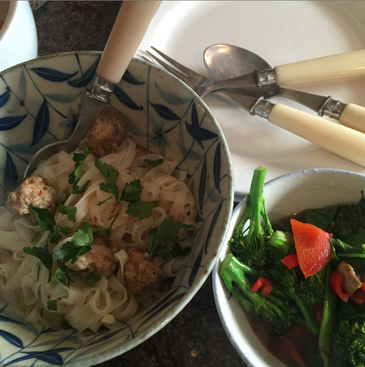 Yes, it was a harder week at the start but I kept going - and was rewarded for it!

PS. Interested in eating Thai-style but think you're going to need all sorts of hard-to-get exotic ingredients?

Wrong! You need just 9 readily-available items in your cupboard and I've compiled them into a little free e-book available here if you'd like it.

Creator of Tiniest Thai diet + supperclub 💛 Lose weight easily in your 40's+ eating a Thai-inspired diet - if you who love food! 💛 #sunshinesoul