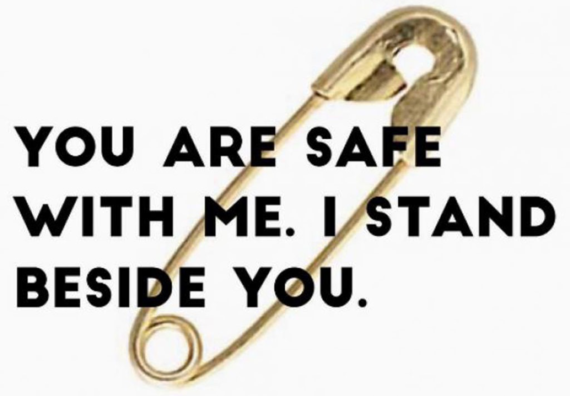 Caption: Image of safety pin with words superimposed "You are safe with me. I stand beside you." (Safety Pin, Snopes)

Are you among the many Americans who are considering wearing a safety pin after this election? This simple object has quickly emerged as a sign that the wearer is willing to offer a safe space for women, immigrants, Muslims, LGBTQ, people of color, and other groups marginalized by the rhetoric of President-elect Donald Trump.

Progressive US media venues are advocating strongly for the seemingly small step of wearing safety pins. Stores across the United States are running out of stock. Yet there are hidden dangers in wearing safety pins, as shown by the post-Brexit safety pin movement. Here are the 4 questions you need to ask before wearing a safety pin to help you avoid these dangers.

What Are Your Motivations and Goals?

Many people are not wearing the pin in an intentional manner, but because others they know, like, and respect are putting on the pin. They are falling for the bandwagon effect, a thinking error discovered by researchers in psychology and behavioral economics where we "jump on the bandwagon" by following the behavior of others in an unreflective manner. Yet other people have motivations and goals that differ from our own.

For instance, you might want to put on a safety pin to indicate your desire to stand up for the rights of minority groups caught up in the hate crime wave. However, another person might put on the pin to indicate disagreement with the election of Trump as President. Someone can be motivated by a desire to signal to others that he did not vote for Trump. Perhaps some person may want to do something to make a difference, and see the pin as a safe and easy way to do so. Plenty of other motivations exist, and most people will experience a mix of more than one. You need to reflect on your own motivations to make a wise decision about whether, where, and when to wear a safety pin and thus achieve your goals.

Are You Prepared to Face Criticism?

Safety pin wearers after Brexit received a lot of criticism for simply acting to address their guilt and show themselves to be open-minded and tolerant without doing anything more substantial. Similar criticism has quickly emerged in the US, coming both from marginalized groups targeted by Trump and from white males as well. In other words, safety pin wearers are being criticized for virtue signaling, using this object to show themselves as virtuous to others, without doing anything else to stop the spike in hate crimes, racism, misogyny, sexism, and white nationalism following this election.

Now, I follow the philosophy of "do not judge, or you too will be judged," so no judgment from me if that is your primary motivation. However, whether that is your primary motivation or not, you need to be aware that some folks who share your values will judge anyone who wears a safety pin. After all, they cannot easily distinguish one who wears a safety pin to provide a safe space from another who does so for purely virtue signaling reasons. Keep this potential negative in mind as you are making your decisions about wearing the pin.

Are You Prepared to Face Hate Crimes?

One potential consequence of signaling that you are providing a safe space is addressing hate crimes. In 2015, there were 5,818 hate crimes reported, with most being either intimidation or assault. Most of these incidents occur in one-on-one settings, but some will occur in public venues, and you might be the safety pin wearer who happens to be present when one occurs.

Are you prepared to support someone being intimidated? If you want to wear a safety pin, you need to be ready. A classic de-escalation tactic to deal with harassment is simply to stand by the person being targeted, and stare silently at the aggressor. Avoid showing emotions or responding to provocations, so as not to rile up the person and turn harassment into assault: simply use your body language to signal support. In most cases, this will be sufficient to prevent further escalation of the conflict.

What about someone being assaulted? This is a more complex question that depends on the situation. While some advocate for all safety pin wearers to be prepared to intervene in physical violence, I think that providing a safe space does not have to mean doing so. You should decide for yourself whether and how you want to get involved in a situation with physical violence, and I strongly encourage you to make that decision before wearing a safety pin. Remember, your involvement can simply involve being willing to call the police. By doing so, you will avoid the bystander effect, a well-known sociological phenomenon where no bystander offers any help to a victim of a crime.

Do You Have a Plan of Action?

Many safety pin wearers don't have a solid plan for where and when they should wear it, and tie themselves into knots of anxiety and stress trying to figure it out. It is imperative you know your motivations and consider the potential criticism and hate crimes so that you're better able to determine a plan of action of when, where, or even whether you wear a safety pin.

For instance, if your only motivation is to offer a safe space for minorities who are suffering from harassment, you should wear the pin in places with a significant likelihood of that occurring. This includes public places like streets, grocery stores, public transportation, bars, and so on. Unless your workplace lacks harassment policies, it might not be a good place to wear the safety pin for that motivation. Depending on your social circle, you may not need the pin when spending time with friends or in value-based communities such as churches or secular groups.

Most people have more than one reason for wearing a safety pin. Carefully consider your own motivations and plan ahead to act and react accordingly. Doing so will allow you to wear a safety pin in such a way that honors your individual intentions as well as the intentions of the larger safety pin movement.