I've worked with thousands of step-couples* and it's not an exaggeration to say that they are suffering (there is a 62-74 percent divorce rate in second marriages with children). 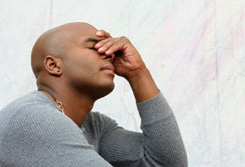 For the majority of fathers I work with, they suffer because they often feel like they're walking on eggshells with their new partners when it comes to the topic of their children.

I've also found that the majority of men can't stand conflict and would prefer to avoid it at all costs. They keep a lot of pain to themselves and that's a shame.

So what do they worry about that is so difficult for them to talk about?

1. They worry about whether their new partner accepts and loves their kids.

Most fathers have high hopes of a "blended" family. They naturally desire that their children love their new partner and that his partner loves his children. He may find if he asks his partner if she loves his kid, an awkward silence or hesitation ensues. Love takes time to cultivate and can't be imposed on anyone, especially those who are not biologically connected, but it's a tough pill for many men to swallow. They want to talk about their children and they should be able to, but they often get mixed messages from their partners and are confused as to what to bring up. It becomes unsafe to talk about their children for several reasons. Either their partner doesn't understand his kids because they aren't the parent or because they're more interested in talking about other things. They may be critical of his children and many fathers quietly give up and keep their thoughts about their children to themselves.

And if the truth be told, they also admit that when their partners aren't at home when they're with their children, they can relax. They don't have to be looking over their shoulders to see if they are being constantly examined, inspected and judged. They can rough house more with the kids, let the chores go, eat in the family room and make as many loud noises as they want.

2. They worry about their new partners disapproving of their parenting.

Clinical experience shows that many fathers, post-divorce, become more permissive in their parenting. There are varying reasons for this, one of them being that a lot of fathers feel shame and guilt for putting their kids through divorce and not being able to provide a biologically intact family. Many get 50 percent parenting time and others much less. They don't want to spend the precious time they have with their kids being strict and enforcing rules.

Many women don't agree with this type of parenting and many men feel talked down to and judged about their parenting styles. A lot of men would rather just shutdown than talk about it.

3. They worry about communicating with their ex and upsetting their new partner.

Fathers communicate with their exes about the kids and find that their new partners may have problems with this communication or the amount of it. This is challenging especially given that "co-parenting" is foisted on divorced couples as the gold standard (whether this is a good idea is another topic for discussion). They have the desire or feel obligated to talk to the mother of their children and of course should be able to when it comes to the kids.

However, many women are threatened by the interactions their partner has with his ex. Some demand daily accountings. They want to know how many emails, how many texts, and how many calls have been exchanged.

Men get tired of what feels to them like interrogations and end up retreating or even lying about their interactions with the ex so as not to upset their partner or start the inevitable fight.

4. They worry about being put in the middle and disappointing both their new partner and their kids.

Fathers may feel that for a good part of their daily existence they're not pleasing anyone. Wednesday Martin, Ph.D., author of Stepmonster says, "Dad likely fears that if he angers his ex or the kids, he won't see them as much, and feels guilty that the kids went through a divorce." Men also fear angering their partners.

They feel pulled by the needs of their new partners (especially if their partner doesn't have children) and by their children. They find it tough to find a good balance and often feel overwhelmed.

Most fathers want to be both supportive partners and good parents to their children. Many of them live with a nagging fear that what they are doing isn't enough, they aren't enough, and at some point, their partners and their kids may have had enough of them.

This is no way to live.

The encouragement is for men to tell the truth to the women they are with. Walking on eggshells is an exhausting job. While this may seem simple enough, for many men it's challenging to say what's on their minds. Any partner, male or female, should be open to hearing their partner's feelings and concerns. If their partners aren't open to hearing them or these conversations tend to end in a fight, it's time to pursue professional counseling with a therapist who is knowledgeable about or specializes in stepfamily issues.

• When I use the term "step-couple," I mean a couple, where one or both have children from a previous relationship, are dating, living with or married to one another.

• Portions of this article originally appeared in Stepmom Magazine.

More:
remarriage Parenting divorcestepparentingstepparent
Newsletter Sign Up
A weekly guide to improving all of the relationships in your life
Subscribe to HuffPost’s relationships email
Successfully Subscribed!
Realness delivered to your inbox