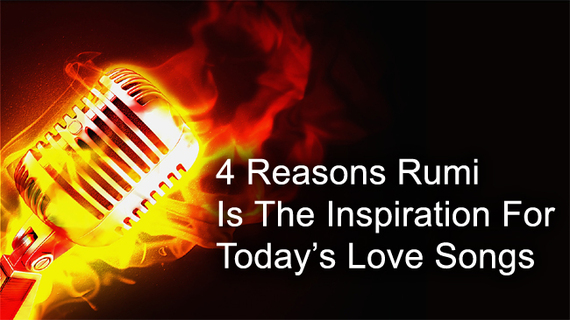 In the early days when I had just started translating and interpreting the works of the iconic 13th Century Persian poet and philosopher Rumi, I became aware of what I thought then were strange similarities between Rumi lyrics and the American blues.

How could it be, I thought, how could lyrics from an 800-year old Persian poet have anything in common with songs from a 20th Century American phenomena?

Despite my initial disbelief I found similarities in four major themes that run through both of these diverse genres: heartache, drunkenness, disagreeable lover and aloneness.

HEARTACHE
The main theme of the blues is of course having the blues or heartache. Standard blues lyrics routinely talk about looking for a fix for the pain of having the blues. In fact just like the classic Persian poets, a blues performer considers having the blues a real privilege. There is a saying, that if you don't have the blues, you ain't got nothing.

Rumi of course routinely exclaimed proudly how the pain of love was exclusive to mystics. In fact in my translation of his poem "Go Back To Sleep," Rumi is shunning all those who aren't fortunate enough to be suffering from this particular love sickness. He is commanding them to go back to sleep, or remain in darkness of ignorance and give up their desire for growth and evolution. Just like in the American blues, this heartache was also paramount for Rumi.

Rumi says:
Love is best when mixed with anguish.
In our town, we won't call you a Lover if you escape the pain.

DRUNKENNESS
The similarities don't end there. Also like many of Rumi's poems a blues singer is often singing about being drunk, or is getting drunk, or just woke up with a hangover. Rumi's famous quatrain from my book Hush, Don't Say Anything to God: Passionate Poems of Rumi clarifies this point clearly:

DISAGREEABLE LOVER
The similarities continue. In the famous Billie Holiday's song "Fine and Mellow" she sings:

"My man don't love me
Treats me oh so mean.
He's the, lowest man
That I've ever seen.
Love will make you drink and gamble
Make you stay out all night long."

And here's one from Rumi:
"Everyday my heart falls deeper in the pain of your sorrow.
Your cruel heart is weary of me already.
You have left me alone, yet your sorrow remains.
Truly your sorrow is more faithful than you are."

Here, Rumi's "sorrow of love" is interchangeable with the having the blues.

Billie Holiday's line "love will make you drink and gamble," complaining about the heartless lover ruining one's good name is a common theme in Rumi poetry as well.

ALONENESS
And the last major similarities between these two disciplines is complains of always being alone. They are alone for various reasons: they are misunderstood or shunned by others, their lover is never around, or nobody desires them. And this topic of aloneness is rampant in both the Persian classical poetry and blues lyrics.

So these similarities over the years made me aware about a connection between Rumi and the blues, in fact I used to perform a song called "Rumi Blues" with blues music and rhythms, honoring the connection without actually fully understanding the reason.

THE AFRICAN AMERICAN CONNECTION
Then a few years ago I came across an article in the San Francisco Chronicle that confirmed my assumptions.

The article exposed the missing link for me: that blues is an African American experience. And African American of course denotes origin from Africa and this is where things get interesting. Although the article focuses more on religion than the musical connection to Africa, the point that interests me is the lyrics.

The Persian classical poets, specially Rumi, where immensely popular in the East. In fact Rumi has been a giant in Middle East ever since the 13th Century. The Persian classical metaphors for heartache, drunkenness, disagreeable lover, and aloneness were well-established standards all through the Mideast from the Mediterranean Sea to India, North, West and East Africa and the Moorish Spain.

The African slaves, who were familiar with the imagery and metaphors of the Persian classical poetry, brought these ideas with them to the US and gradually through generations as English became their native tongue learned to express them in the New World.

THE BLUES IS THE SOURCE OF TODAY'S POP MUSIC
The modern day pop music started with the 50's era Rock and Roll revolution, however rock is heavily based on the blues. Some actually call Rock the white version of the blues. "Certainly Led Zeppelin's Jimmy Page made no secret of the fact that he had been deeply influenced by blues and that Led Zep was going to be a modern day outlet for the form of American music that inspired him to become a guitarist in the first place," Allmusic.com. Hence this African American experience inspired by Rumi and other Persian classical poets became the source for today's popular music.

So next time you hear young crooners tearing their hearts out in a modern love song, you have Rumi to thank for.