To be effective, marine conservation must be based on rigorous and targeted science. The large and growing threats to ocean ecosystems -- overfishing, climate change, pollution, and habitat destruction -- coupled with the limited scientific capacity of most small island states make science-based management not only an imperative, but also a challenge. Here's one part of the solution: better global collaboration between local and foreign scientists. 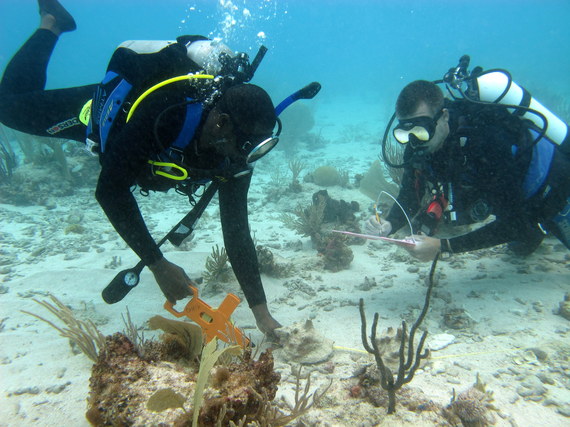 Barbudan fisheries staff member being trained by a foreign researcher to conduct conch surveys as part of the Waitt Institute's Blue Halo Initiative in Barbuda. (Photo courtesy of Waitt Institute.)

My colleagues and I present best practices for international scientific collaboration in an opinion paper published recently in the journal Frontiers in Marine Science. Our group of researchers from the Caribbean, Canada, the USA, and UK, examined the hurdles to effective collaborations for foreign and local scientists, institutions, and funders, and provides recommendations for leaping over them. Here are our four broad actionable recommendations:

1. Align priorities between foreign scientists and local communities: Foreign marine scientists sometimes enter small island states with ill-conceived notions of what the research priorities should be. Too often effort is not made to ask local scientists and institutions about their priorities and needs. Lack of alignment can result in data that is never used for management, or in tense working relationships. Sometimes highly specific research interests of foreign scientists are a distraction from core monitoring work that needs to be done. Locals need to know their research priorities and lobby for assistance with them, and foreigners need to inquire about and consider those priorities.

2. Build long-term collaborative relationships: Ocean conservation is a long game, best won by teammates who know and trust each other. Short-term, one-off projects are common and may not have much benefit if relationships are not built, and roles and responsibilities are not clear. A formal memorandum of understanding is often a good place to start, but informal communications and networks are also important to foster, as that's often how things actually get done. Funding agencies can help by putting less emphasis on short-term outputs and instead structure funding so it's dispersed in stages - for project scoping, during project, and post-project.

3. Enhance local capacity: This recommendation is quite literally the old "teach a man to fish..." adage - in this case, of course, it's teach a man to fish sustainably and he'll always have food to eat! While outside funds are often welcomed by small island states, the money may do little good if the country doesn't have the ability to continue the program after those funds dry up. Additionally, "Restrictions on access to resources and technologies by local versus foreign researchers can alienate or exclude local scientists," we wrote in our study. "This can be something as fundamental as reliable electricity and Internet access, or even access to a computer outside of the office." Providing training, equipment, mentoring, professional networking, and strategic support for developing a durable research program should be including in collaborations.

4. Share research products: Foreign marine scientists collect an abundance of data while conducting their studies, but they often do a poor job of sharing that data with their local collaborators. "Creation of a central database for depositing all marine research data from small island states would be an important step," we wrote. Foreign and local scientists should together plan to commit some of their project time to outreach and discussion of the policy implications of their work. Writing reports is not enough - it's important to directly engage the community and policy makers. It's also important to give and share credit where it's due. 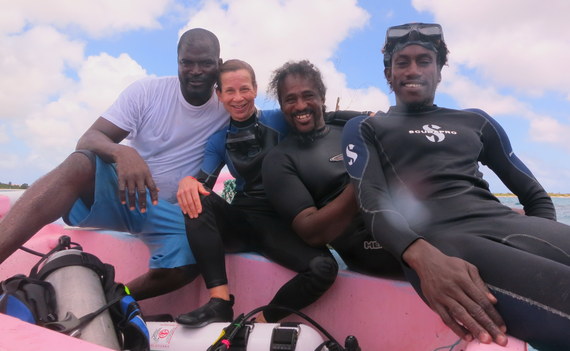 Collaborative and respectful ocean research efforts that span countries and cultures can pay big dividends and are cause for hope. Each of these four pillars are a core part of how the Waitt Institute approaches work with local partners through the Blue Halo Initiative in Barbuda, Montserrat, and Curaçao. Funders can and should support collaborative efforts in this direction by including these pillars as grantmaking criteria.

Certainly, this is far from rocket science, but we need to keep reminding ourselves and each other of the importance of taking a thoughtful and thorough approach to collaborating so that together we can restore and sustainably manage ocean resources and support the food security, economics, and cultures that depend on them. 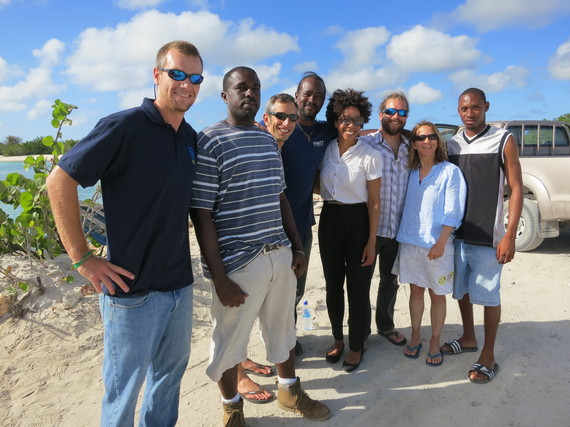