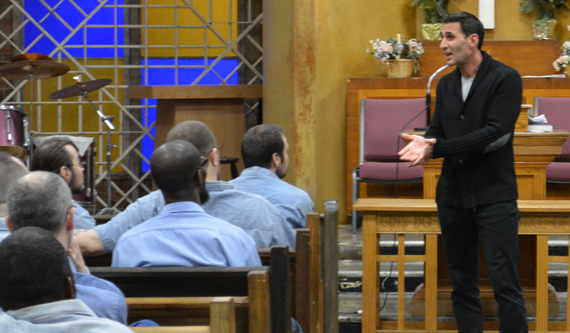 This April, I was inside a high security prison.

The plan was to talk to the men there about the work cdv.org does and to educate them on the connection between childhood adversities and the potential impact.

While I believe I educated them, they also educated me. Here is what I learned.

1) I could have been any one of these men

The last time I was in a prison I was about 6 years old. I was visiting my father. Statistics show that when you experience Childhood Domestic Violence (CDV), you are 74% more likely to commit a violent crime against another. So why did I not become a statistic? I could have been any one of these men I was speaking with.

Researcher Anne Masten refers to what happens, what promotes resiliency, as an "Ordinary Magic." The child who grows up to become resilient does so because a caring adult - "THE ONE" - stepped in to help them unlearn LIES, or negative beliefs, that CDV encoded in their developing brain, which can lead to problems in adulthood with relationships, emotions, behaviors, and health.

For these men, "THE ONE" never appeared.

UNICEF calls CDV the "single best predictor as to whether a person will be a perpetrator or a victim of domestic violence later in life." I knew this to be true, but a conversation I had at the end of my visit made this clearer for me than ever before.

As the men were leaving, one introduced himself to me and thanked me for coming.

"I want you to know that I grew up in a violent home and later was violent to my wife, but I never connected the dots between the two things until now. I want you to meet my son. He experienced the same thing," the man said.

Standing next to him was his son, also a resident of the prison.

3) It's never too late for positive change

Leading researchers agree that adults"...often cannot connect the dots between what they experienced in their childhood homes and the challenges they face today."

As I spoke in front of these men, I saw the attentiveness in their eyes. I watched as some of them wiped away tears and slowly began to connect the dots for themselves. They want to change and they want to find help. This was clear in the surveys we distributed after the visit.

One man wrote "Is there something like this on the outside so I can continue this? Because I need to continue this."

Another said "(this discussion) helped me understand where my shortcomings may have come from and that I can overcome and I am not completely programmed."

4) What if these men had "THE ONE" in their lives?

After I walked outside the prison walls that night, I continued to ask myself "What if these men had 'THE ONE" in their lives?

Glen Doepel, a volunteer worker in the prison, summed it up this way. He said "In my 23 years as a volunteer, I have learned more from the men behind bars than I ever expected. Of all my experiences, one of the things these men have taught me is the true importance of family at a young age. Our lives can be radically shaped at a young age, for better or for worse. And facing these types of adversities can lead to many different outcomes, including the possibility of incarceration. That is why it is so important to raise awareness to issues such as Childhood Domestic Violence. In doing so, families can be reconciled, perhaps jail time can be avoided, and ultimately lives can be saved."

You can be "THE ONE" for someone

If we can help make a positive change in the lives of men in a maximum security prison, we can do the same for anyone that experienced CDV. It's never too late or too early.

You can be "THE ONE" for someone by taking the CHANGE A LIFE program. It's free and only takes 30 minutes. Then maybe, as more people step into the lives of those who grow up with domestic violence in their childhood homes, we won't have to ask "what if?"

Thank you to The Four-Seven for the opportunity and to the men of the Lebanon Correctional Institution.