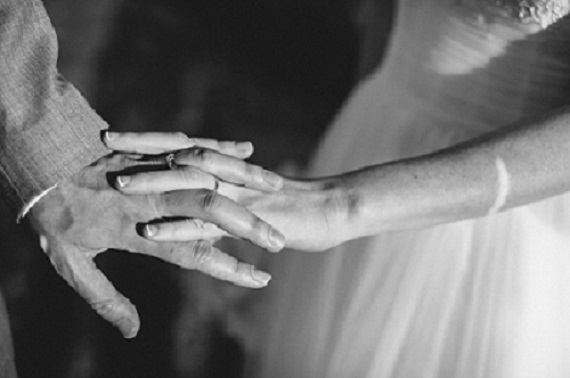 I dated my wife, Emily, for five and a half years before she became my fiancee. I took so long because, emotionally, I wasn't ready to be a husband. But I also struggled to make sense of marriage. What was the point? Emily and I were already in a monogamous relationship. We lived together, we traveled together, we committed to TV series together. We Skyped with each other's nieces, and we visited each other's grandparents. We even passed out simultaneously before 10:00 p.m.

Weren't we exactly like a married couple? So what was going to change by simply saying, "I do"?

Apparently even the most minor shifts can reverberate like a tectonic transformation...

Forgive me, father (and mother), for I have sinned

Raised in the age of Lucy and Ricky's twin beds, it's no wonder my parents took a "No ring, no sharing" stance on premarital sleeping arrangements. Emily and I obviously adhered during visits, but even when we were home in Washington, DC, this edict haunted me. It didn't matter that I was a tax-paying citizen in my 30s; sleeping in the same bed felt, on some level, wrong.

I did it anyway, but not without guilt. Talking to my parents was like a perpetual "Walk of Shame," as I tried to conceal where I was headed that night, or where I was commuting from the next morning.

But once Emily and I got engaged, moved to Houston and bought a house, I was in the clear. Matrimony pardoned all sins.

Still, that old-fashioned mindset stuck, and giving my parents a tour of our place, my apprehension rose as we approached the master suite. Waiting there were dual sinks and matching nightstands and a shared closet, and I knew the sight of it all would make me uncomfortable. Could I actually refer to it as "our" room?

No matter how old you get, there are just certain things parents and children shouldn't acknowledge. Which makes it that much more unsettling when they ask when we're going to start trying to get pregnant.

Emily and I have always rotated paying -- you get lunch, I got dinner. This practice has continued into marriage, purely out of habit. And when it's her turn, I still feel relief, the kind you feel knowing your cheeseburger won't be logged on your credit card bill.

Joint finances has to be among the biggest newlywed challenges, and for me, it's been good news-bad news. Recently, my car was in need of massive amounts of flushes and alignments. Whenever my credit card undergoes such trauma, I typically require the full five stages, but this time the blow was softened from knowing the funds were pulled from a larger pool. Acceptance was achieved before exiting the parking lot.

Conversely, Emily's recent Bed Bath & Beyond run revealed the sword's other edge. The elegant trash cans, the toilet paper containers, the paper towel dispensers -- they were all beautiful, but they were not things I would've spent money on. Yet I had.

To be clear, Emily has a great job and is the opposite of an irresponsible spender. This experience simply brought to light that it's not just our bank accounts that have merged -- so have our purchasing priorities. What she wants, I want, and vice versa. Unless what I want is to store the Charmin in its ripped-open plastic wrapping.

Still, there's a temporary nature to the designation, "fiance," and sitting next to her, I couldn't help feeling out of place, as if I was some sort of interim NFL coach.

The two required surgeries were done just after the wedding, and thankfully, they went perfectly. Emily's been a rock star throughout, despite dealing with an implanted, radiation-emitting plaque and stitches in her eye that itched like Newman's fleas.

Though I hated that she was in pain, I welcomed the chance to take care of her. And even as I stood there, just outside the open door, deepening our connection during each visit to the bathroom, I knew I was where I was supposed to be. Because I was her husband.

The father-in-law/son-in-law relationship doesn't always come easy. Why would it? It requires one guy to entrust what he loves the most to another guy who's half his age, a quarter as smart and one-nine-millionth as worldly. (At least it did in my case.)

Emily's father is one of the kindest, wisest people I've met, which made him both inviting and intimidating. Though I'm sure it was in my head, I always worried there was a distance between us, which was embodied by the way we greeted and goodbye'd each other: by handshake.

But once I proposed -- with his approval, of course -- our handshake transformed into a hug. I was now part of the family.

And that's probably the biggest difference with marriage. Emily and I are now family. My niece and nephew call her "Aunt" and at weddings on her side, I'm included in pre-ceremony photos. It took us a long time to get here, but it's fitting that this is how it ends -- married and merged in every way possible, unconscious on the couch while watching Sons of Anarchy.