As I sit in the non-descript exam room of the famed Dr. Raj Kanodia, I am struck by the simplicity of what he calls his "Med Spa." I eye rows of pamphlets advertising treatments I've never even heard of, along with face creams and serums galore. Despite being famous the world over for plastic surgery, the Beverly Hills physician actually created his in-office Med Spa for the express purpose of delaying--even preventing--invasive cosmetic surgery. Sounds counterintuitive, right? Now I'm curious...

I gaze out the window overlooking the bustling epicenter of Beverly Hills, adjacent to Rodeo Drive, and my heart starts to beat faster. I can feel my body temperature rise as I wonder what on earth I've gotten myself into. Dr. Deepak Dugar sees me first. He's friendly, gregarious, and makes me feel confortable right away, which is important, considering I'm about to confide in him my deepest, darkest skin secrets and silliest insecurities.

"Are there any particular areas [of your face or body] you're concerned about?" the doctor inquires diplomatically.

I didn't even have to think twice. "My freckles!" I exclaim. "Can you do anything about my freckles?" Little does the doctor know, my freckles have been the bane of my existence since I was an 8-year-old girl (the irony being, no one ever notices them except for me).

Dr. Dugar smiles broadly. "I have something for that. You're going to love it." He goes on to explain the office's newest toy, something called "Clear + Brilliant," a non-ablative fractional laser. Huh? (Don't worry. I'll explain what that means later.) It's relatively painless with little downtime, the doctor tells me, "the perfect lunch-hour laser facial." Apparently, this device evens skin tone, reduces the appearance of pores, and eliminates dark spots (and freckles!) all while softening and brightening the skin.

"I'm in!" I blurt impetuously. Little did I know what was in store.

So what is this miracle treatment dubbed the "red-carpet" facial for its A-list celebrity appeal? How does it work, and what do you need to know before going under the little red light?

1. The Pre-Party: What to know before you go

What makes the red-carpet facial so appealing to celebrities and civilians alike is that it's less expensive and less invasive than other lasers. While other treatments run thousands of dollars, the new laser facial costs hundreds and can be done during your lunch hour with minimum downtime. Much of this reduced risk--both facial and financial--can be explained by the technology. This low-level non-ablative fractional laser, also known as the Clear + Brilliant system, is nonsurgical and less invasive than traditional resurfacing lasers. While "resurfacing" lasers are ablative, meaning they obliterate the top layer of your skin, the fractional diode laser preserves the epidermis, penetrating through it to the deeper dermal layers, resulting in less social downtime. (In other words, less time locked in a closet where no one can see you.) Your skin is literally refreshed from the inside out. The laser's thermal process rejuvenates the skin's dermis, so as your epidermis naturally sloughs off, bright, baby-like skin beneath the surface is revealed.

What's more, this laser delivers thermal energy (remember, light is converted to heat inside the body) through evenly distributed pin-sized beams of light. These micro punctures (a.k.a. "thermal damage") are evenly distributed, leaving patches of skin untouched by the laser, thereby speeding recovery. While non-ablative lasers heat the epidermal and dermal layers of the skin stimulating cellular renewal and collagen production, resurfacing lasers completely remove the upper layers of the skin, resulting in more cellular damage and therefore a much longer healing process.

Ablative treatments, like the CO2 laser, can result in up to two weeks recovery and present a greater risk of unwanted side effects, such as infection or scarring. Downtime for the red-carpet facial, on the other hand, can be as little as a few hours. The longest downtime I personally experienced was two days, and the shortest was two hours.

Tip: Whether you have a date with the red carpet or not, I recommend scheduling your laser appointment a few days before a big event for optimal "glow." I usually book my treatments at the end of the week, so I'm back to normal by the time I get to the office Monday morning. No one notices a thing, other than: "Your skin looks amazing."

Don't listen to anyone who tells you lasers are painless. Unless they've lost all sensation of feeling, that person is lying to you. Just remember, the euphemism "thermal rejuvenation" actually refers to beams of light burning tiny, but deep, holes (or, here's another euphemism: microthermal treatment zones) in the skin--ouch! Though I cannot corroborate from experience, the first time I had the treatment I was convinced it was more painful than even childbirth. However, at the time, I missed one very important point: when the nurse applies the topical anesthetic to the treatment area, you must know when your face is completely numb and when it's still getting there. Be sure you can say (or sing) to your doctor with full confidence, "I can't feel my face when I'm with you," otherwise, the next fifteen minutes of your life will feel like an eternity.

To be completely honest, after my first go with the laser I almost didn't come back, only the results were so good, I had to give it another try. The next time, however, I took over-the-counter painkillers prior to my appointment and arrived early to allow a full hour for the anesthetic to take effect. I also asked my doctor to use the lowest laser setting, and the pain and downtime were both markedly reduced. The second time around I hardly felt a thing, and my face was barely even red after treatment. Be advised, however, the higher the laser setting, the more noticeable the results. Everything in life is a tradeoff, so be sure you know your pain threshold in relation to your desired results, and share this with your doctor.

TIP: The laser has three different settings, so discuss with your physician which one is right for you. If you have sensitive skin like I do, try taking an OTC pain reliever before your appointment and arrive early to allow plenty of time for the topical anesthetic to work its magic.

3. The Morning After: Post-treatment care

According to studies, immediately following treatment, most patients experienced transient erythema and edema. What?! For those of us who aren't medical experts, that just means temporary redness and swelling. Phew. These symptoms, however, should subside within the first day or so. Then, once the redness has worn off, usually the morning after treatment, tiny pin-sized scabs will start to appear all over your face. According to Dr. Dugar, this is actually the unsightly pigment (or melanin), generally resulting from sun damage, rising to the surface of the epidermis. The cumulative result of these microscopic scabs is a sandpapery feeling to your face. Bear in mind, as with most cosmetic treatments, things tend to get worse before they improve. Your face will be red and rough before it becomes clear and brilliant.

One way to speed recovery is by using a topical antioxidant. Antioxidants neutralize free radicals resulting from environmental stressors like pollution and the sun's UV rays. In clinical studies, patients who used an antioxidant serum in conjunction with laser treatments reported better results than those who didn't.[1] In one study, patient post-treatment redness and swelling resolved 1-3 days faster for those with an antioxidant regimen than for those without.[2]

According to Dr. Dugar, the reason a topical regimen is just as important as the laser treatments themselves is because the puncture wounds of the laser allow the antioxidants to reach deeper than they normally would. The doctor refers to this laser-antioxidant duo as a restorative and preventative approach. "The laser itself restores previous sun and oxidant damage, but the secret benefit comes immediately after treatment, when we have the advantage of thousands of microscopic laser punctures into the skin. This gives us a temporary conduit to treat the deep dermis, normally unreachable with classical skin care. The antioxidant serum further nourishes and rejuvenates the skin from the inside out."

Note to self: pick up antioxidant serum stat!

Another way to care for your skin post-treatment is to protect it from the sun's UV rays. It's important to remember that even though the red-carpet facial can help undo visible signs of aging and sun damage, it's up to you to prevent further damage by avoiding direct sunlight, not only before and during treatment, but particularly afterward when your skin is most sensitive.

TIP: Wearing sun-protective clothing (like a hat) and a UVA/UVB sunscreen are crucial to reducing the risk of unwanted pigmentation and sunburn post treatment. Continued use of sunscreen, moisturizer, and an anti-oxidant serum will also help maintain results.

Finally, the last thing you need to know about the red-carpet facial is how often to come back for more. While the laser treatment is safe enough to do every two weeks (and in fact, that was the interval used in clinical studies), Dr. Dugar recommends monthly sessions, noting that while results can be seen after the first treatment, it takes five to six treatments for long-lasting results.

Okay, now I know what you've all been waiting for--the big reveal. So what sort of results did I see? Well, I've done three treatments over the course of three months, and to be honest, I'm hooked. I love the changes I've seen thus far. My freckles are noticeably reduced, in both number and pigmentation. It's like all my skin's tiniest variations have been blurred and blended into the clear, bright canvas of my face. Ladies, no more hazy "beauty" filters needed; this facial is the real deal. My skin tone is not only more even, but especially following treatment, my face feels super soft and supple--and others notice a difference too! Red carpet or none, this is one beauty splurge I want to make a monthly habit, and I'm not the only one who feels that way.

According to clinical studies, 86% of subjects reported being "satisfied" to "very satisfied" with the overall laser treatment series. None reported being dissatisfied, and 89% would recommend the treatment to their family and friends.[3]

A special thanks to Dr. Deepak Dugar and the Office of Dr. Raj Kanodia for contributing their expert knowledge to this article. 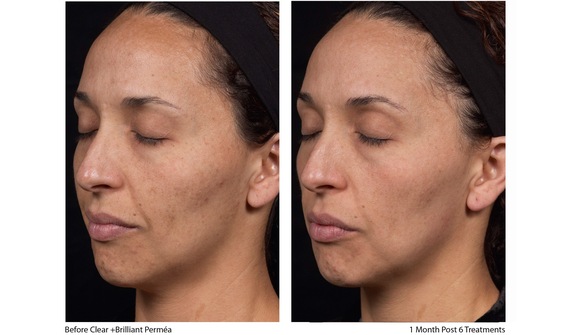 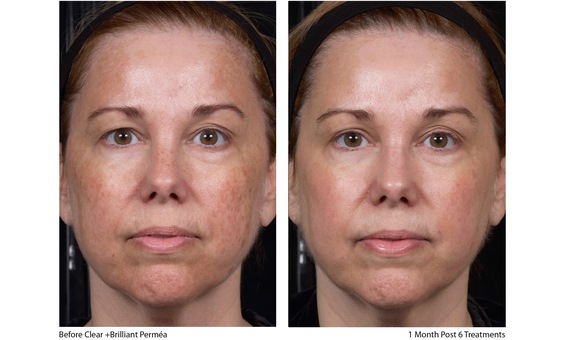 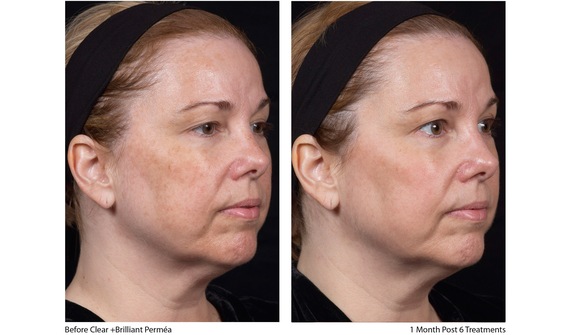