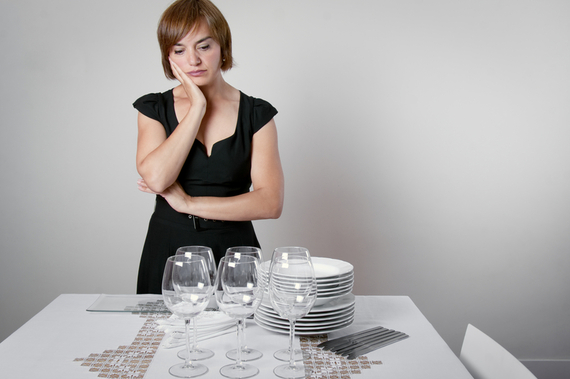 I spent the past two Thanksgivings alone -- I missed the usual Thanksgiving dinner, which consists of forty relatives. All my aunts, uncles, cousins, and I are close -- most of us live in the same state. This year I hope not to miss Thanksgiving (or Christmas) but I'm not sure if it's safe to go. I've been struggling with allergic conjunctivitis for three weeks, which has caused tremendous pain in my ears and eyes. My left eye is inflamed. I have a neuromuscular autoimmune disease called myasthenia gravis (MG). Like other friends of mine with MG, lupus, multiple sclerosis, and other illnesses, I have to weigh the joys of being with loved ones against the risks of getting a cold or the flu, which can lead to relapses, hospitalization, and weeks (or months) bedridden.

Nobody wants to celebrate a holiday alone. Please don't think I'm suggesting that chronically ill people lock themselves up from their family and friends. What I am saying is this: According to the CDC, between 5 percent to 20 percent of the U.S. population gets the flu every year. And one in four people do not cover their mouths when they cough or sneeze. Even when people are asked about their health, not every guest or relative is forthcoming about things like whether he or she has recently had the flu. And some people may not even be aware that they are sick. Flu season starts in the fall and usually peaks between December and February forcing many people with compromised immune systems to make tough choices. The chances that a person with a weak immune system can get sick from a holiday dinner or become hospitalized from getting "the common cold" are great. On two occasions, I have almost relapsed because I got the flu.

Several readers of my blog, "Fashionably Ill," shared their experiences with me. Many have missed holiday gatherings to protect themselves from the cold, flu, and pneumonia. No one wants to be alone. I love my family but I also don't want to die. For some people with compromised immune systems, contracting the flu is a life or death issue. Two chronically ill people shared different perspectives on staying home:

Kay: I spend many holidays alone or wearing a mask because I have a primary immune deficiency as well as lupus and MG. Most of my family understands that I cannot fight infection, so they respect my decision to stay home. What I don't get is when people insist on exposing others to their germs. It ends up placing the consequence of pain and suffering squarely on the shoulders of the fragile.

Jay: My opinion is if you work and are in places where you are exposed to germs then you should be able to be with family for the holidays. If its just that you don't feel good or feel up to it because of how you feel then that's a bit different. I just wish I had a family for Thanksgiving to enjoy a turkey feast. My mom is 89 and in a nursing home. I have brothers but they spend the day with their in-laws. I am divorced for the last two years... and to top it off my son goes with my ex. So my suggestion is if you have family, to make the best of it while you can.

Here are four tips for celebrating a holiday alone:

1.Always have a program
One Thanksgiving, the now-defunct SOAPnet had a General Hospital marathon. I watched the marathon after I gave thanks and read my Bible, which is what my family does at Thanksgivings. This year, I'm going to be binge watching Jane The Virgin. Creating an agenda gives you something to anticipate. It's more discouraging when I don't have a plan and realize at the end of the day that I've finished watching a really depressing movie (or really stupid TV show) just because it was on.

2.Dress up a little
Last year I was in pajamas and heavily congested, but I did shower, put on makeup, and brush my hair. And it made me feel good. Never underestimate the power of a good lipstick.

3.Be creative with social media
It's easy to get depressed on social media if we get lost in people's holiday pictures and think everyone else has somewhere to go. Last New Year's Eve, I had an idea that no one should be alone that holiday. Almost every New Year's Eve, I have found myself bedridden with a violently painful episode of polycystic ovarian syndrome (PCOS). It's not enough that PCOS has been in my life for eleven years, it insists on ringing in the New Year with me. In the past, I would lie in bed crying in pain while watching SyFy's Twilight Zone marathon. Last year, I created an online party during the two-day marathon so people could post comments on Facebook while watching at home. At first, I thought three people would come. Fifty guests attended from around the world. While I did cry because of the pain, I also had a lot of fun and wasn't all alone. We started out as a motley crew of strangers -- some of us with disabilities or illnesses (ranging from Parkinson's to bipolar disorder) and some of us healthy -- but we became friends. We have kept in touch through Facebook calling our group the "Twilight Zone NYE Posse." I am hosting the party again this New Year's Eve.

4.Cry if you have to
Let it out. It's not normal to get an infection from a paper cut or celebrate a holiday alone. I make peace with the loneliness by acknowledging the absurdity of it.