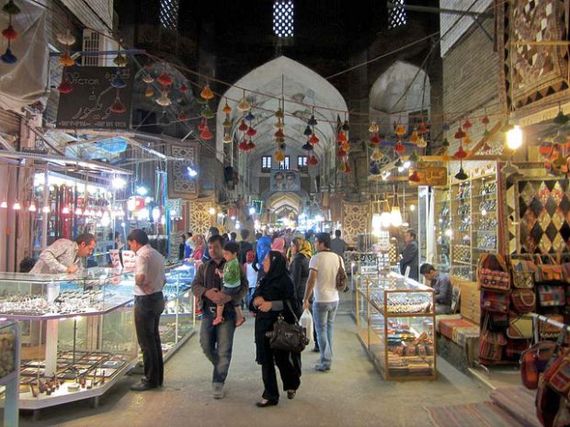 Iran. Uzbekistan. Iraq. North Korea. Despite the travel warnings issued by the State Department for all but Uzbekistan, Americans can safely travel to each of these countries. These trips may take a bit more preparation than the average vacation, but each destination holds a variety of UNESCO World Heritage sites, ancient mosques and medieval palaces. With the help of organized tours, here's how you can experience each country.

See: Best Places to Visit in Africa and the Middle East

Iran
You can fly to Iran, and yes, you'll even be able to return home, though you may not want to after exploring holy cities, visiting UNESCO World Heritage sites and marveling at the palaces and mosques of the former Persian Empire. Wilderness Travel offers a guided two-week trip through Iran that includes stops in the ancient city of Yazd to see Dowlat Abad, a traditional walled Persian garden, as well as Esfahan, home to colorful tiled mosques, such as Jameh, not to mention a 17th-century bazaar. If you want even more time to explore, consider the company's 24-day trip, which includes visits to 13 of Iran's 17 UNESCO World Heritage sites.

Intrepid Travel also offers a guided tour of Iran that includes stops in key cultural cities, such as Shiraz, Esfahan and Eghlid. The two-week tour begins and ends in Tehran, and includes plenty of opportunities to explore bazaars, tea houses, carpet workshops, gardens and mosques. As part of a homestay (in a nomad tent, no less), you'll have the chance to sample traditional cuisine, such as kuku (vegetable soufflé) and chelo kabab (roasted meat served with rice).

If you go:
All U.S. travelers need a passport that is valid six months beyond the date of travel, as well as a tourist visa.

Uzbekistan
Experience the famous Silk Road that played a major role in the lucrative silk trade during a small group tour with MIR. You'll trek through the five "'stans," including Kazakhstan and Uzbekistan, on what the company calls "a modern-day caravan." Along the way, explore holy Islamic sites, meet with silk and ceramics masters, watch dance troupes and share meals with Uzbek and Karakalpak families.

Advantour, another operator offering trips throughout Uzbekistan, also emphasizes local culture and traditions with tours at medieval palaces, ancient fortresses, historic sites and nature hikes. If you're looking for a little more adventure, search for two- and three-day tours that include a camel ride through the desert, traditional folk song sing-alongs and an overnight stay in a yurt camp at Aydarkul Lake.

If you go:
A valid U.S. passport and an Uzbek visa are required to enter Uzbekistan.

Iraq
The Iraqi government has authorized a handful of companies to offer guided tours of Iraq, including Babel Tours, which leads travelers into southern Iraq. Trips begin in Baghdad and explore a number of cities identified in the Bible, including Uruk (Erech) and Ur. When you're not navigating ancient cities, you'll be able to canoe along the Tigris River through a region rebuilding itself after the Saddam Hussein regime. Holy shrines, temples, even a day spent at the legendary Babylon, are also on the itinerary.

In March, a second tour operator, Hinterland Travel, kicked off nine- and 14-day tours for 2015. Ancient Mesopotamian cities, including Kish and Babylon, are at the heart of these tours, as are cities across the country boasting temples, shrines and palaces. Keep in mind: Given that the Iraqi government must approve itineraries ahead of time, there's little room for customizing your journey.

If you go:
All U.S. travelers need a passport that is valid six months beyond the date of travel, as well as a tourist visa obtained through the Embassy of Iraq in Washington, D.C.

North Korea
Tourism in North Korea is restricted, especially for Americans, but it is possible to visit with the help of several tour companies. Beijing-based Koryo Group offers a wide variety of five- to 10-day group tours, as well as customizable tours that can be taken independently. Highlights include visits to Kumsusan Palace of the Sun, Panmunjom (the South Korea border) and Mount Myohyang. Look for tours tailored to all interests, such as architecture, cycling and adventure. The company even offers tours that revolve around the annual Pyongyang Marathon.

You can also sign up for a trip with New Korea Tours. Group tours range from three to 10 days with the most popular set to visit the country for International Workers' Day (May 1), a day for celebration with an annual folk festival, and National Independence Day (September 9), which marks the founding of North Korea. Most guided tours involve train travel, but U.S. nationals may only leave the country by plane -- at least for now.

If you go:
A valid passport and a valid North Korean visa are required to enter the country. U.S. citizens can apply for visas at the Embassy of the Democratic People's Republic of Korea in Beijing.

About the author: Erin Gifford is a Washington, D.C.-based travel writer and founder of Kidventurous, an award-winning family travel resource. You can follow her on Twitter at @Kidventurous, connect with her on Facebook or get the latest tips and tricks for traveling families at http://kidventurous.com.