You guys know how I often compare our lives growing up as Gen Xers to the lives of our kids and marvel? It's truly fascinating how things were so different in the "olden days." Take the common road trip... Sure, there are similarities -- we elbowed our siblings, rolled our eyes at our parents as they blared their oldies and asked, "How much farther now?" more times than the Smurfs on their way to visit Father Time. (How many of you were with me for that reference?) And yes, my kids have to go to the bathroom the second we hit the highway, the same way we did. But that may be where the similarities end. Here's proof:

WHEN WE WERE KIDS: We brought our Sony Walkman (Walkmans? Walkmen?) and a box of mixtapes that were a compilation of songs we'd taped off the radio -- well, half-songs, I should say, as we were never able to hit the "record" button fast enough. We had those football and baseball "video" games with the dots that blipped across the field and, eventually, Gameboy, which gave me Tetris nightmares and had me looking at shelves at rest stops with the intention of mentally maneuvering all the Twinkies and Tasty Cakes onto the same shelf. (P.S. All of the above ran out of batteries halfway to your destination, as there were no chargers and the adults actually used the cigarette lighters to, well, light cigarettes ... I'm pretty sure 90 percent of the adults I knew smoked.)

TODAY: Our kids pile into the car with 500 DVDs, multiple sets of headphones, Sony PS607s, Kindles and iParaphernalia -- though they could handle a trip around the world with nothing more than an iPad, the thousand apps they've downloaded onto it and the use of a cellphone as a hot spot. Oh, and enough adapters to fill every car lighter. My kids, by the way, wouldn't even know the original purpose of those things. 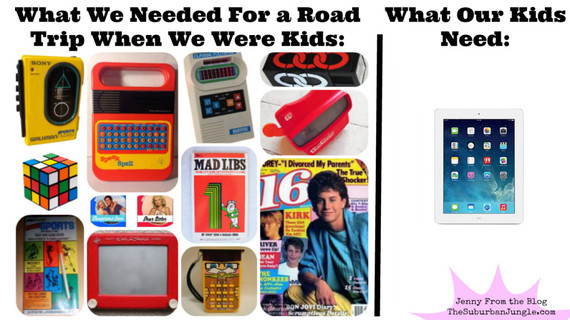 WHEN WE WERE KIDS: Wow, were our games complex. There was I Spy, Make the Trucker Honk His Horn, The License Plate Game, GHOST, Mad Libs, those Yes & Know invisible ink pads, and the saddest game of all: the Wave Game, which was played in desperate times and consisted of you and your siblings waving at people in passing cars and then fighting over who got the most waves back. (It was hard to really tell who they were waving at, but you were always convinced it was you, which made keeping score tricky.) And of course there was my Dad's favorite, The Quiet Game, which earned you a whole nickel (no, it wasn't wooden, I'm not that old).

TODAY: My kids wouldn't even understand most of the paragraph above. For starters, they'd say, "Mad Libs is an app, right?" And the one time I showed them a Yes & Know pad at a rest stop, they oohed and ahhed the way one would at the Museum of Natural History.

WHEN WE WERE KIDS: We fought relentlessly over which seat we got... and there was a hierarchy: The BEST spot was lying across the back window, which was awesome until the car hit anything larger than a pea and you rolled onto your brother's head. Then came the window seats. They were great because fresh air was essential, given that you'd spend much of the ride in a cloud of Salems or Pall Malls (well, in my case, a mix of Vantage 100s and pipe smoke). Also desirable, the death seat, I mean DJ seat -- that's the one in the front middle where you could wield your power to change stations over the rest of the riders. The worst spot in any car? The hump. Half the time the hump didn't even have a seat belt. Eh, who am I kidding? Seat belts were merely a suggestion back then, anyway. If the secondhand smoke didn't kill ya, the lack of seat belts certainly didn't help your odds of survival.

TODAY: Well, there's really no such thing as sprawling out because most of us, myself included, don't allow those seat belts to be unbuckled until the car is in "park," and the car seats we use have like 37-point harnesses. (P.S. I'm pretty sure I'll be making my kids ride in the back until they get their learners' permits, so calling "shotgun" would be futile.)

WHEN WE WERE KIDS: For some reason, no one liked to use the AC back then -- or much heat, for that matter. We were either shivering in our Freezy Freakies or those gloves where each finger was a different person, or we were sweating bullets with our heads hung out the windows, which took us 15 minutes to crank open.

TODAY: Air-wise, our kids are in luck. Well, they can't open the windows because they're all on child-lock and only go down about an inch, but no worries, there's an air vent approximately every five inches. I turn back to check on my kids and they look like they're in a photo shoot.

All in all, I'd say our kids have got it A-OK, though it doesn't stop them from complaining that they're bored every seven minutes. Next trip, we'll do it old-school-style, and I'm sure all trips to follow will be a breeze.

I'm currently doing a Gen X Heartthrob Smackdown on Facebook, so if you made out with posters that you ripped from Tiger Beat in the '70s/'80s or '90s, you may want to chime in!

Related Piece:
5 Things Gen Xers Did Growing Up That Our Children Wouldn't Understand

Join Jenny From the Blog for her rants and observations on Generation X, Parenting, Marriage, and Aging on Facebook and Pinterest.

Baby Photobombs
More:
generation xMotherhoodRemember WhenParentsHumor
Newsletter Sign Up
Raise the kind of person you'd like to know
Subscribe to our parenting newsletter.
Successfully Subscribed!
Realness delivered to your inbox