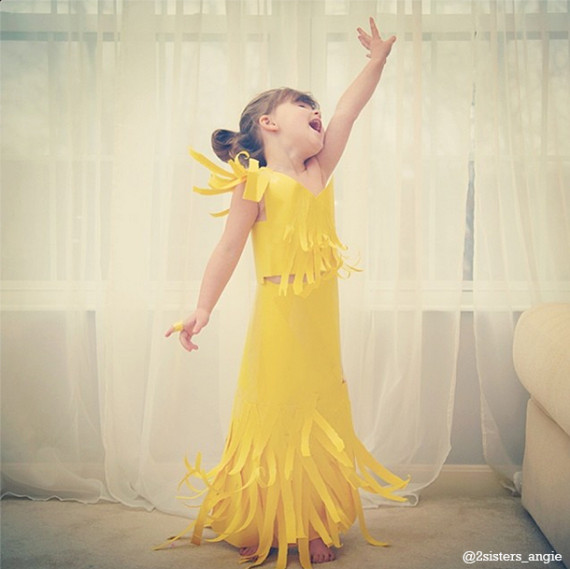 Then, about nine months ago, Angie's feed started to change. It became clear Angie's daughter (she calls her "Mayhem") was more interested in fashion than the average 4-year-old. Mayhem shunned her store-bought princess dresses and started wrapping herself with scarves and sheets creating her own styles.

Then one day Angie got tired of finding her clothes in Mayhem's toy box and suggested they make a dress out of paper. Mayhem loved the idea and they haven't stopped creating paper dresses since.

I've been continually amazed every time Angie's pictures pop up in my feed. The dresses started like this: 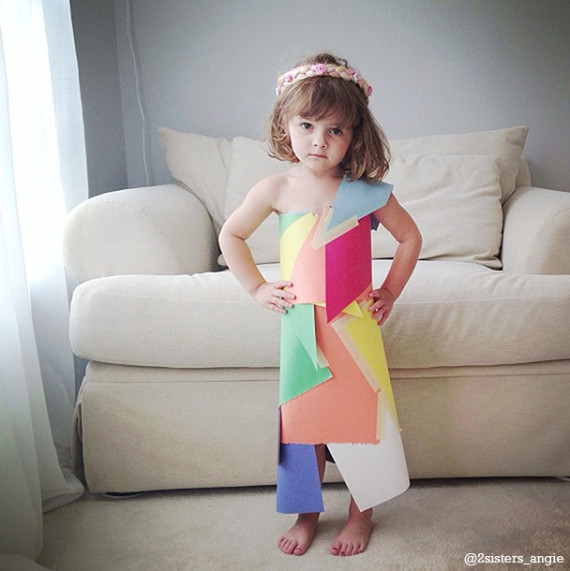 And over the last few months, I've watched them evolve to this: 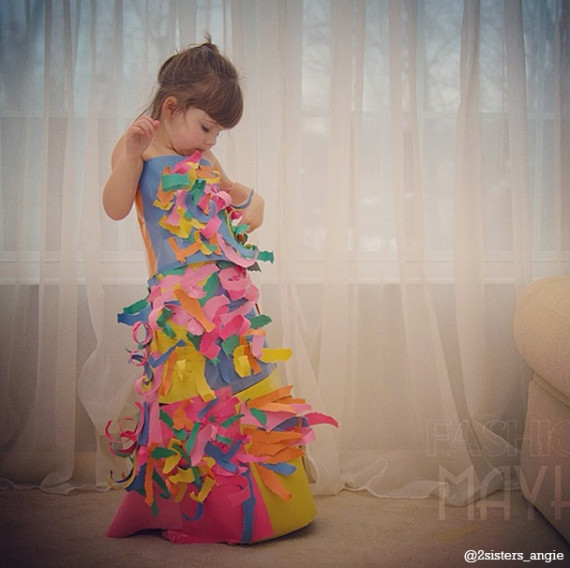 Having a 4-year-old daughter of my own, whose biggest fashion moment was putting a red bow around the waist of her green Super Soccer Stars t-shirt and calling herself "Peter Pan," I had a few questions for Angie. Namely...

The ideas are pretty much a 50/50 split, but Mayhem constructs a lot more than most people would probably believe. That's one of the best things about this project, I see her learning new skills every single day. At this point, she knows exactly how many sheets of construction paper she needs to make herself a top and a bottom. She can lay the entire thing out and tape it together all by herself. Definitely, the more complex designs have more of my time invested, but she's literally always beside me learning something new if she's not tearing or taping or gluing while I am. 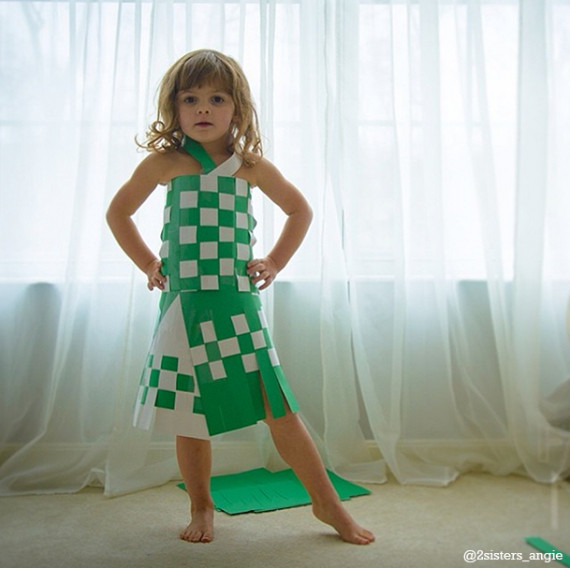 Do you have an example of a dress she constructed on her own?

She made the dress below entirely by herself. I wasn't even home and she couldn't wait to show it to me and have me photograph it. 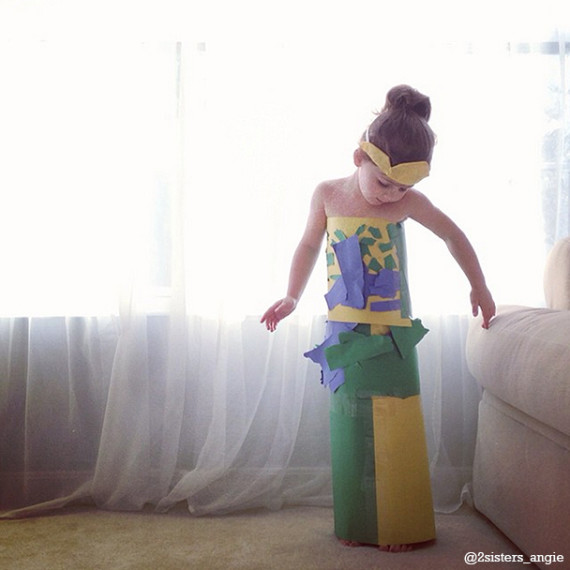 Are all the dresses made of paper?

Most of the time. We use a lot of construction paper, but we also use tissue paper, wrapping paper, and gift bags. We have also used silk scarves, tulle, and aluminum foil. Basically, if we can find it laying around the house and it's pliable, it's fair game. Clear packing tape and glue are our adhesives of choice. 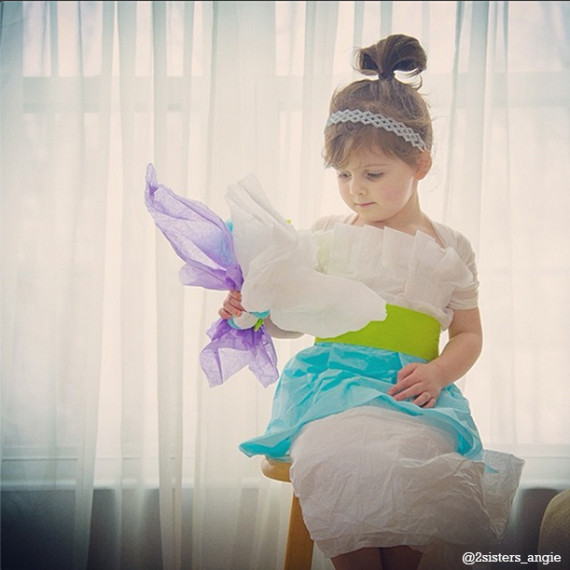 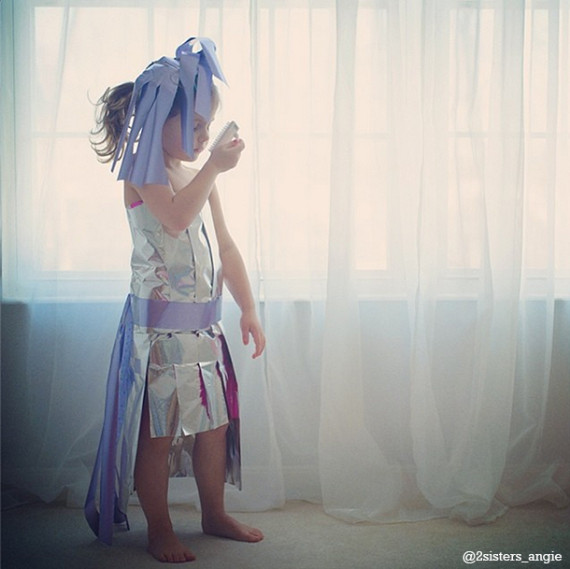 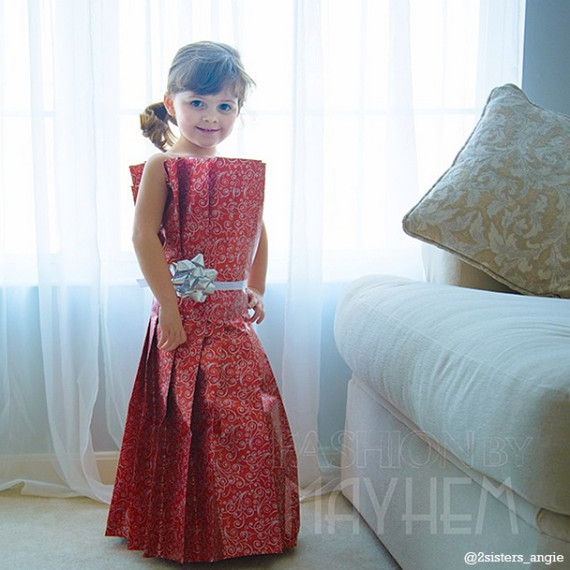 Where does she find her inspiration? Is she watching runway shows and award shows?

We pull inspiration from wherever we go. The shark dress, for example, came as a direct result of her first visit to an aquarium. 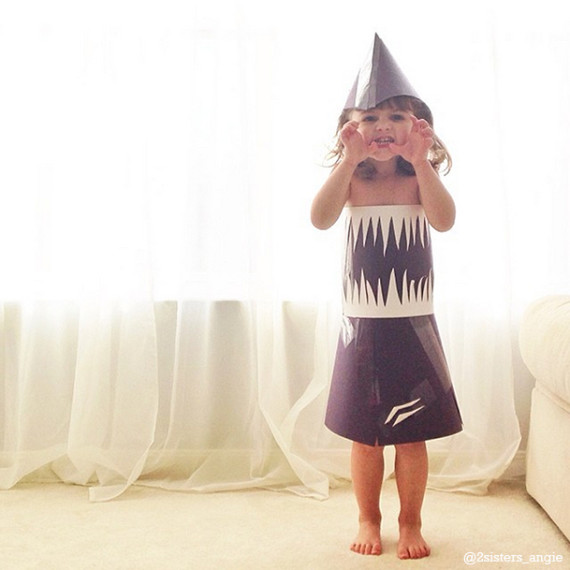 She also gets a lot of ideas from shows that she watches or books we read, like Minnie Mouse, My Little Pony and Elsa from "Frozen." 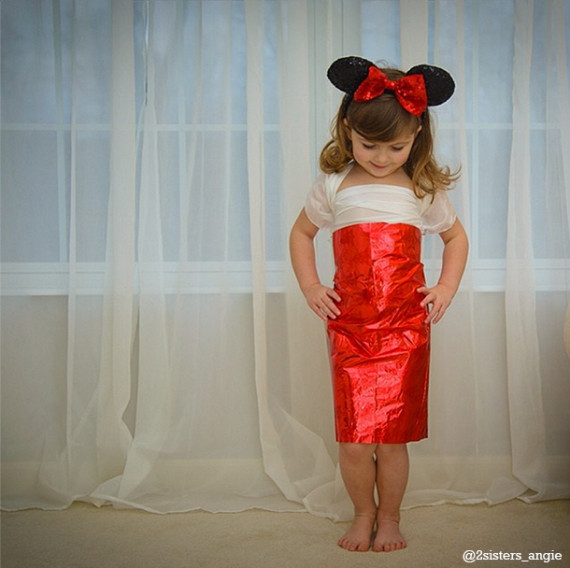 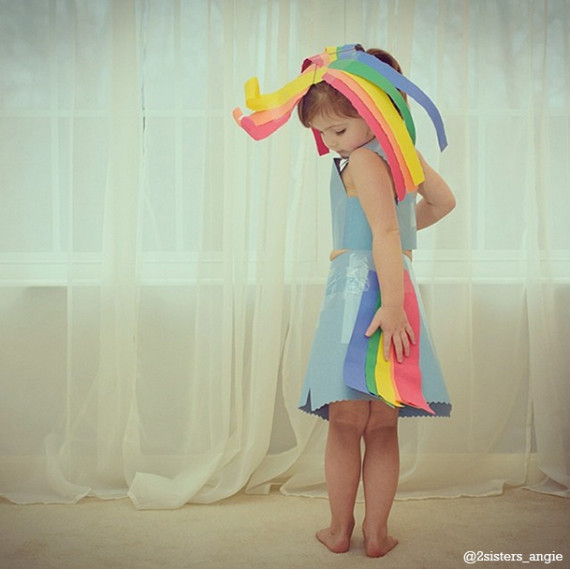 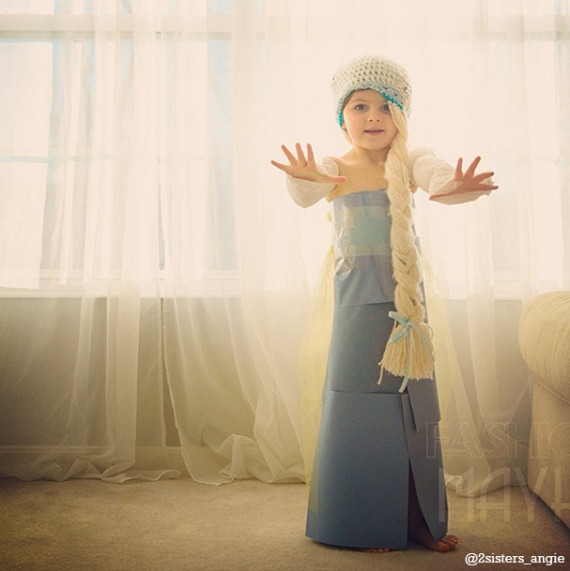 Sometimes I'll Google images the day after award shows, so she can see the dresses worn on the red carpet and pick which ones she wants to make. 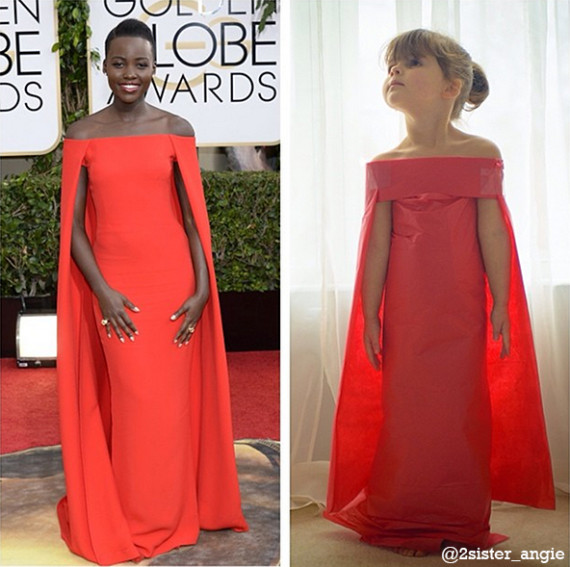 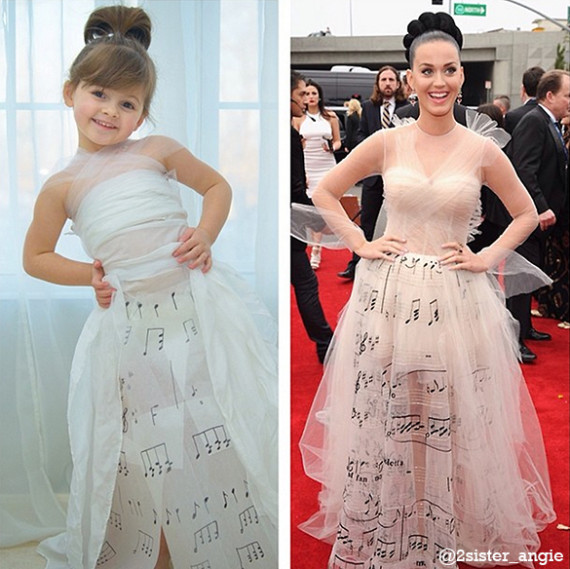 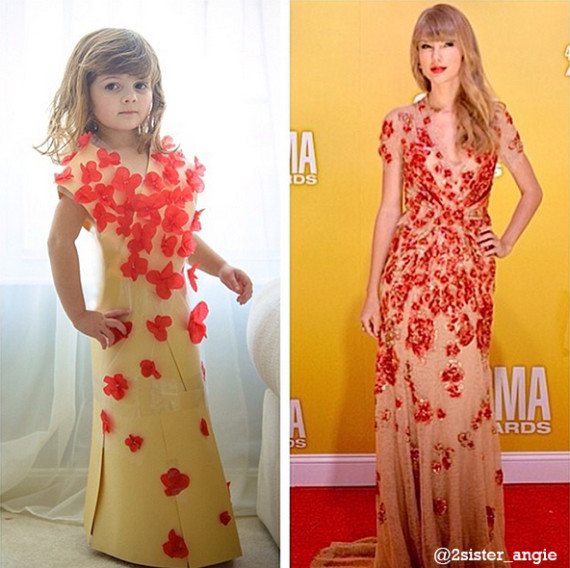 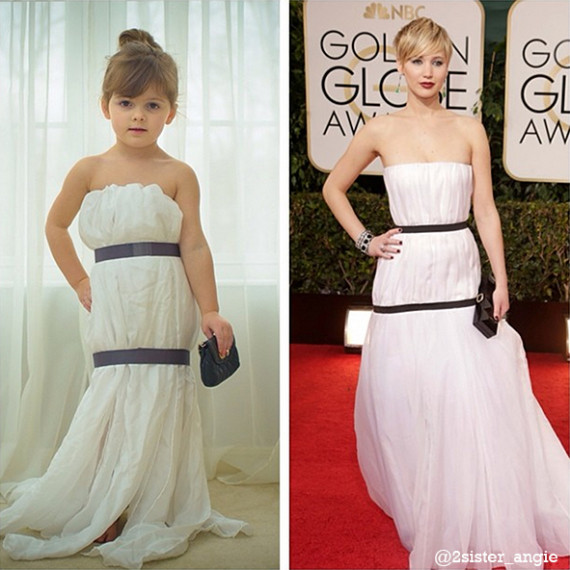 We also leave a tab open on our iPad with a search for "project runway dresses" so that we can quickly reference those as well. She's never actually seen an episode of Project Runway, but I did show her a clip one time explaining that there is a show all about making dresses and I thought she might hyperventilate. 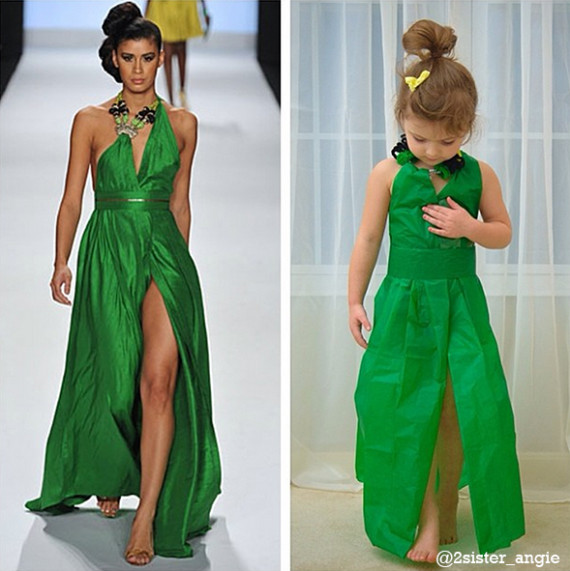 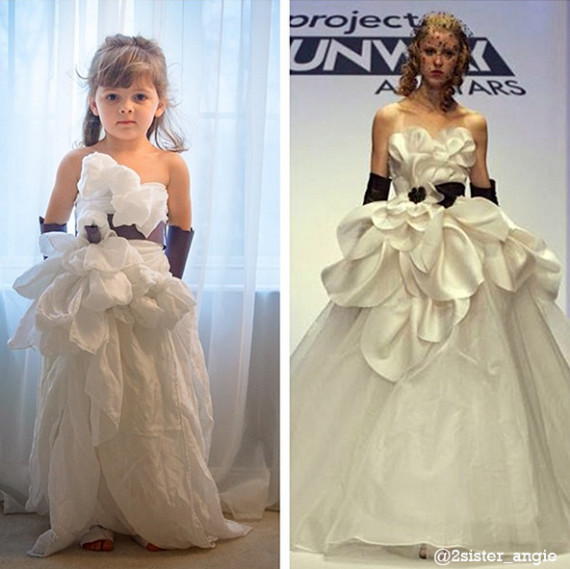 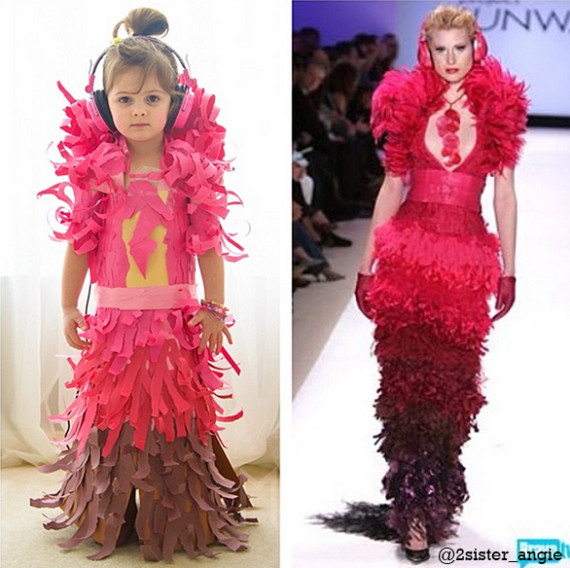 Have you always been crafty? Were you a fashion designer in any sense before this started?No and no. I actually don't consider myself to be the least bit crafty. Don't ask me to build something out of popsicle sticks and pipe cleaners ... you'll be incredibly disappointed! Cutting and taping paper is about all we do. And the most ironic part of this whole project is that I am literally the least fashionable person you will ever meet. In reality, I know nothing about fashion and cannot sew a straight line to save my life. A friend suggested I could start sewing these creations from scraps of fabric and I laughed at her. I'll take paper and tape any day over getting anywhere near a sewing machine! 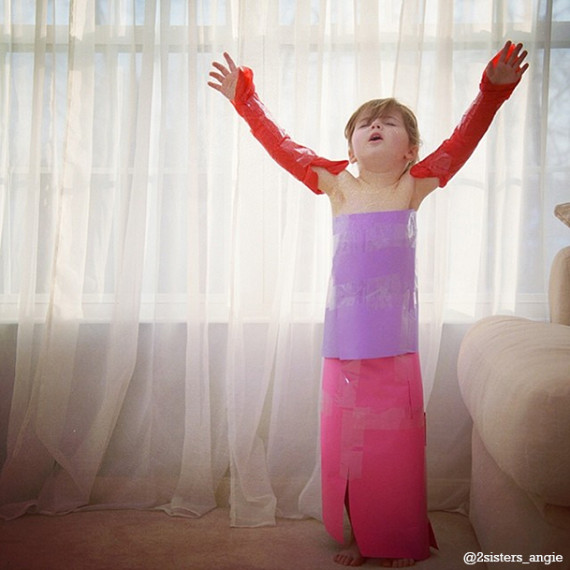 Do you think this is going to be a lifelong interest for Mayhem?

After we made our first paper dress, Mayhem requested another the very next day. Then another the day after that. And no one is more surprised than I am, that she still wants to make them nearly 9 months later. I have no idea if it will continue, but as long as she wants to make them, we'll keep doing it. 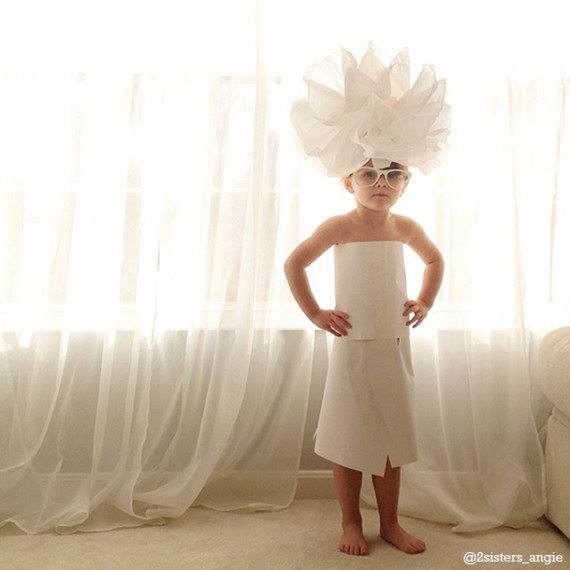 If you aren't on Instagram, check out more of Mayhem's creations on FashionByMayhem.com.

Babies Dressed Up As Adult Careers