What is the best way to combat Islamophobia? Meet a Muslim. Research and studies are periodically conducted measuring the population and reach of Muslims, but just about zero exist when it comes to how many people speak about Islam and Muslims and have never met a Muslim or read the Quran.

According to the Pew Research Center, as of December 2015, about 1% of the US population is Muslim. That's roughly three million men, women and children, going to school, working and coexisting in America. And yet, numerous people have never met, had a conversation with, interviewed, hired or have as a Facebook friend, one Muslim.

My husband and I, African American Muslims, interact with just about every race, religion, ethnicity because of our work. As marriage workshop facilitators, authors/speakers and marriage lifestyle experts, we find ourselves giving marriage advice to everyone. There are all certain things we have in common as people and the general principals of a successful marriage have never changed. Muslims are just people, just like everyone else. You can find some of our tips in our book Surviving Marriage in the 21st Century, 13 Easy Tips to Help You Get to 20 Years and Beyond.

My husband and I were blessed to be highlighted in Ebony Magazine as Couple of the Year in 2012. It sparked conversations between not only those not of our faith, but African Americans as well. You don't see a lot of Muslims in major African American publications. The focus of magazines such as Essence and Ebony and online outlets such as The Root and The Grio are African American, and yet, many of our stories are never told. Even the Huffington Post sub outlet, Black Voices, skips over us as well.

I am Black, American, not of any foreign nature, a female and Muslim. That's several demographics and yet you do not people reflective of my image in mainstream media. Rufus, my husband, and I have beat the odds and statistics of marriage now at the 26 year mark, and yet you do not see us represented as a couple on talks shows, games shows, commercials or in research studies.

Since light was shed on our lives, our faith and our marriage, I decided to bring to light a list of couples that have been part of our Muslim Power Couples Blog Series since 2014, to show how diverse we are, but connected through commonalities, goals, work endeavors and relationships. Muslim marriages go through the same trials and tribulations as marriages of other faiths. There are a few myths associated with Muslim women and being oppressed, but most every day Americans have no idea that the rights of women in Islam allows us to thrive in our marriages and our faith. Some oppressions are due to cultural traditions and/or values and have nothing to do with religion. How do I know? Because I know these couples and I live the faith. So let's meet them: 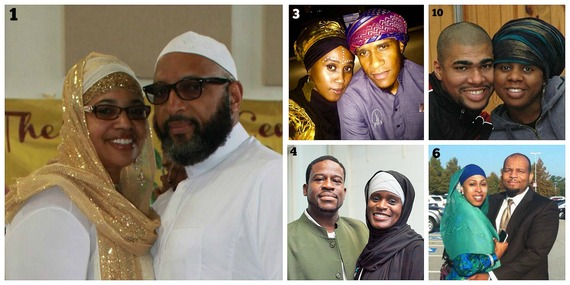 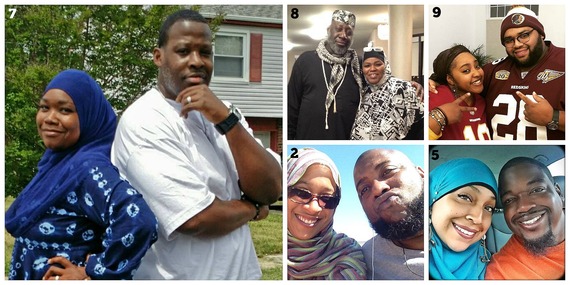 What you see represented here are entrepreneurs, policemen, community activists, event planners, grass root organizers, nonprofit founders, sports enthusiasts, etc. We come in all flavors. There is no racism in Islam as we hold strong to what we believe connects us to God and each other. But wait, there's more:

As we continue to spotlight the images we do not clearly see that represent the US Population, this group continues to work on global issues, which includes domestic violence, transitional housing, green energy, STEM progress, Muslim films and the legacy of the Black family. There is even a White House lawyer and PhD amongst the group. If you look around, we are everywhere. But wait, there's more: 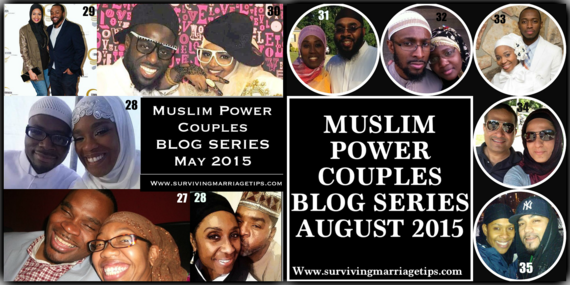 Rounding out this phenomenal group of people are some newlyweds who are building empires. From the fashion industry to establishing greater interfaith relations in our communities, we as Muslims encompass from lifestyle to business, with solid credentials. And yet, you don't see us giving lifestyle tips on your favorite morning shows. We have just as much knowledge and experience as other fellow American citizens but most often times we are kept away from the opportunities.

Who is supposed to be a representative of us? Why don't we see the everyday Muslim living a prosperous and healthy lifestyle and not the crazy wacko Muslim that's putting out videos like Tupac and Osama Bin Laden? I'll tell you why. Because the Mainstream media has chosen not to humanize the American Muslim but to make it more of an abstract being. I refuse to get off on a Donald Trump tangent, but ask yourself, who did you contact when he, Trump, decided to go on a rant against Muslims? Did you contact your local mosque? Your Muslim neighbor? Your Muslim Facebook friend? Have you seen any of these everyday Muslims that looks like these power couples, being given the chance to talk about their lives? Just questions that we as Muslims discuss amongst ourselves as people tend to discuss our lives and our faith without knowing anything about it, but what they see in the media.

You may never see us on a red carpet at the Oscars, or accepting a Grammy. You may never see us as the friendly neighbor on your favorite TV sitcom or drama, because Hollywood writers do not create roles for us unless it's for some form of terrorism or oppression, and you may never see us sitting at the table on The View, (hey Whoopi, call a sistah) unless something we did or was done to us goes viral. Our images are few and far and in between, if they exist at all. But Muslim Power Couples are real, very real. We work hard to keep our marriages, practice our faith and enjoy our culture. We are not only surviving marriage, we are thriving at marriage, faith, business and life.