Forty years ago today, on May 9, 1976, an unusual press conference was held at the old Shoreham Americana Hotel in Washington, D.C.

The story grabbed the attention of national media cameras and the next day appeared in many newspapers across the country as it was thought to be the moment that would forever change the way people with alcoholism were perceived.

Never before was there such a public attack on the stigma of addiction. An incredible collection of famous and influential people gathered shoulder-to-shoulder to put a public face to this largely neglected health issue. Never before had a famous television actor stood in a hazy, smoke-filled hotel ballroom and not only talked not only about his own addiction and recovery, but also explained that "addiction is a disease, one that can afflict anyone."

That actor was Dick Van Dyke. Buzz Aldrin, the second man to step foot on the moon, was there. So was Don Newcombe, the first Major League Baseball pitcher to win the Cy Young award, and Gary Moore, the beloved television host of "To Tell The Truth".

May 9, 1976 was ground-breaking. Many people walking among us today are now entering their 40th year of long-term recovery as a result of this far reaching public awareness effort, dubbed Operation Understanding, and the coverage that followed.

As a 29-year-old filmmaker who was born seven years after 1976 I was working on an independent project about the emerging public recovery advocacy movement for the film The Anonymous People. It was 2012 when I was told about this moment from the historians I was interviewing. I was shocked. How could this have happened? I had spent the better part of the previous three years trying to engage public figures to sit in front of my camera and tell their addiction and recovery stories with only modest success. Due to the persistent stigma many still wished to remain private, and most viewed even their own addiction and recovery stories as largely an individual process - not from a system or community perspective.

I searched and found the tape archives for footage of this historic press event. As I watched the news footage and read more about the 1976 event, I remember thinking "who are these people?" You may be thinking the same thing. Go ask your parents or your grandparents. Ask them if their jaws dropped when they read in their city newspaper that Mercedes McCambridge, Harold Hughes, Dana Andrews or Jan Clayton overcame great public shame and selflessly declared to the world their status as a person in recovery from alcoholism.

This should have been the turning point in public opinion, but strong political and cultural forces of the impending "War on Drugs" squashed much of the forward momentum of this historic advocacy moment. It's now 40 years later and not enough has changed when it comes to stigma and shame. What has changed, however, is that now addiction is the leading cause of accidental death in America. The problem has grown exponentially urgent with only incremental policy and cultural progress to point towards in recent decades.

When it comes to stigma, we may be more comfortable talking about addiction and recovery among our friends and colleagues, but where it counts -- in employment settings, access to health benefits, housing applications, and in the criminal justice system -- much remains the same. I lost count of the number of people who sat in a movie theaters in 2013 and 2014 and, after watching The Anonymous People, talked about how they still felt discriminated against in their day-to-day lives. 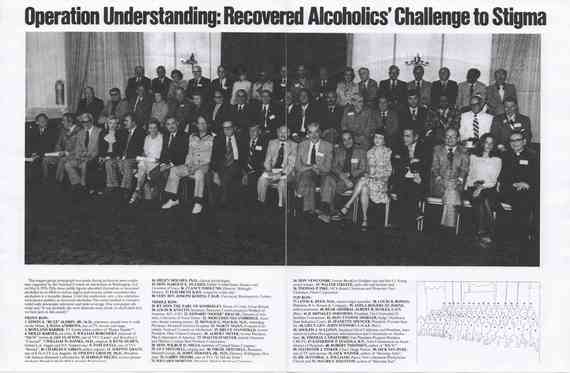 In 1976, Ms. Marty Mann, founder of the National Council on Alcoholism and Drug Dependence, and the others who came together that day envisioned a future where addiction was seen as a public health issue. Forty years have passed and the need to shift public opinion and policy persists.

The UNITE to Face Addiction Rally on the National Mall last October was the second time in 40 years that a list this long of major celebrities and influencers came together to challenge perceptions around addiction and recovery. Tens of thousands cheered and wept as Joe Walsh, Steven Tyler, Sheryl Crow, Darryl Strawberry, Paul McCartney, Ringo Starr, Dr. Mehmet Oz, Allison Janney, and so many more stood up on behalf of the 22 million people still suffering, the millions we have lost, and the 23 million living in recovery.

The Surgeon General of the United States, Dr. Vivek Murthy, made the most important statement of all when he stood before the crowd of the afflicted and affected and declared that he was with them as America's top doctor. He proclaimed addiction as a public health crisis and not a moral failing. The loudest crowd roar of the day came, not from the celebration of a classic rock song, but when Dr. Murthy told the crowd he would release the first ever Surgeon General's report on substance use, addiction, and health later this year.

Let's hope that this time we truly ended the silence around addiction. We must sustain this momentum. We can't afford to wait another 40 years. 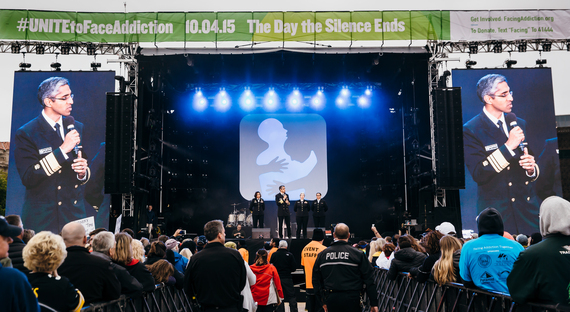