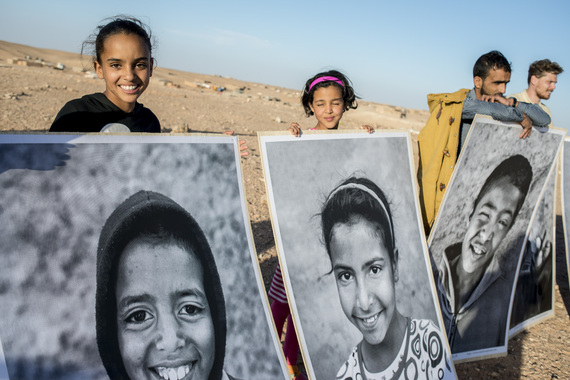 The struggles to overturn colonial rule were long and often bitter. But, over time, most were inevitably successful. The proud fight against colonialism is one that should be consigned to history.

There is yet one colony that remains in the African continent. It is a crisis often forgotten, its people mostly ignored.

Western Sahara - officially considered by the UN as a 'non-self-governing-territory in the process of decolonization' - is sandwiched between Morocco, Mauritania, Algeria, and the Atlantic Ocean. I travelled to refugee camps in Tindouf, Algeria in February to understand the crisis better and meet those most affected by it. And I promised the people I met that their plea will be heard.

After Spain, the colonial power, withdrew from Western Sahara in 1975, conflict between the indigenous Sahrawi population and neighboring countries sparked the beginning of a refugee crisis that has lasted until today. In 1991, the UN managed to establish and protect a ceasefire under the UN's peacekeeping mission, MINURSO, in which parties agreed to deliver a referendum on self-determination. Twenty-five years have passed, and that referendum has still not occurred.

Already in 2016, the humanitarian and political crisis was teetering on the edge of conflict - but now there is a heightened sense of urgency. Last month Morocco withdrew support for the UN's peacekeeping mission, and expelled 73 civilian peacekeepers from Western Sahara. The UN Security Council will soon meet to decide whether to renew the annual MINURSO mandate; in doing so, it holds a key role in preventing this conflict from escalating further.

The Sahrawi people - the people of Western Sahara - have patiently borne the burden of injustice now for over 40 years. Oxfam is well-acquainted with the Sahrawi refugees--many of whom live in camps near Tindouf, Algeria--as we have worked to provide them humanitarian assistance since the start of the conflict over 40 years ago. The lack of coverage or political attention afforded to the crisis has not held us back.

The humanitarian conditions forced upon the Sahrawi refugees are bleak. Made to settle in an arid desert environment, where opportunities to be self-sufficient are all but nonexistent, Sahrawi refugees are heavily dependent on aid. Despite increased needs owing to unpredictable and extreme changes in climate, humanitarian contributions are falling as international donors are increasingly turning away - between 2012 and 2014 they fell a staggering 31%.

The resilience of the Sahrawi refugees to cope with political deadlock and the extreme conditions is inspiring. But, 40 years on and receiving less through the arteries of aid, that resilience is eroding.

Language is hardening in the camps, anger is intensifying. The young people I met, who make up 60% of the people in camps, are increasingly connected and informed about what is happening in the world. Born in the camps and still there, they are eager to take control of their lives and have the same social, professional and economic opportunities that other young people possess.

Sahrawi elders tell them to wait for a referendum that has never arrived. I heard time and time again from the same young people in the camps that the international community only acts when violence occurs. That is precisely why Oxfam is urgently pushing for a return to negotiation and a peaceful, non-violent and lasting resolution to the crisis.

New momentum is urgently needed, and the UN, its Security Council and its individual members, can offer a solution. With parties consistently failing to deliver a political solution, they must step up and take a far more active role. This starts with reinstating the UN peacekeeping mission in full capacity. And they must deliver without compromise on the promises made to the people of Western Sahara - including the right to self-determination - and usher in the end of the decolonization process in a manner that respects international law.

The cost of continued political inaction could be a humanitarian disaster. It is time to close this long chapter in Africa's decolonization. Sahrawi refugees have waited long enough.

Photo Credit: Tineke D'haese / Oxfam. The 40 Faces, 40 Years Exhibition (here, held in the refugee camps) aims to shed a light on an entire generation that has never experienced anything other than life as a refugee. Read more here.