Arguably, today, no other jazz festival in the world than the one in the heart of medieval Italy, Umbria Jazz, manages to create so much excitement. It is a powerful magnet for jazz lovers and devotees of various other music forms, promising a fruitful 10-day journey of high spirits.

It can be said that festivals such as Montreux, North Sea and Marciac are as attractive and rich in context, but it has been the combination of the fantastic settings of Perugia, the intense attention of the crowds and the enormous charisma of its founder, Carlo Pagnotta, which places this festival as an endless glow of hope for the future of jazz.

Not only that, but it also is an example of success, in terms of creating a popular brand, merging history, profound culture, fine cuisine, joyful encounters between peoples, and endless stream of local destinations, so inviting.

As an early discoverer of Umbria Jazz, where I found myself upon the insistence of my Italian friends already in 1976, it was an immense joy to witness the celebration of its 40th anniversary, ending on Sunday, July 14.

It was a worthy 10-day experience, indeed: as some festivals after a decade or two show signs of fatigue, this one was an example of how to reinvent the audience, how to keep local actors engaged.

At the earliest stages of the festival, 'to be there' as part of the happening - free concerts - was the primary goal for most of us, and now, after four decades of hundreds of memorable performances, it is the quality of the music that counts.

The large Arena Santa Giuliana proved it with scenes of jubilation for Wynton Marsalis and Jazz at Lincoln Center Orchestra (featuring a fantastic rising star, Cecile Mc Lorin Salvant), as also before the unforgettable appearance of the virtuoso pianist Stefano Bollani with the National Orchestra of Santa Cecilia. Both concerts were deeply rooted in tradition, yet easily felt as if they were large rock arena events.

If Umbria Jazz celebrated its 40th with a large spectrum of artists, sharing Perugia's more than 10 venues, it also had a big emphasis on piano this year: it managed to gather who is who in the instrument, and it will always be remembered as such.

The special event, of course, was the one bringing together two giants of jazz, which had their footprints in its past 50 years of history. Herbie Hancock and Chick Corea had first played duo in 1978, and since then only three more times. This one was truly special, a unique concert, for the love of Umbria Jazz and, their friend, Pagnotta. 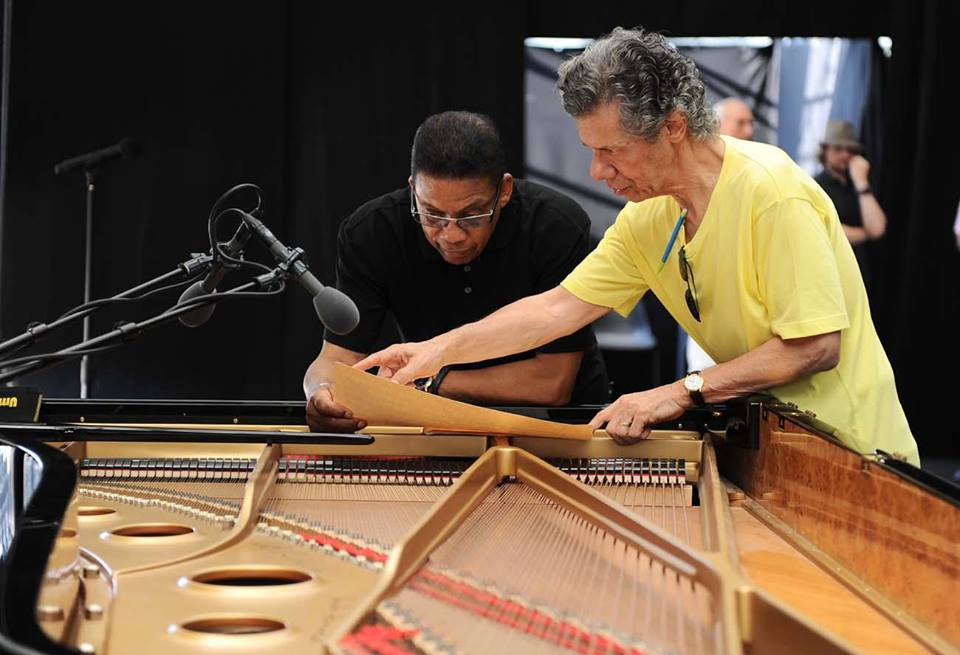 Their music, marking a lifetime partnership in spirit and mastery, was filled with references to their mentor, Miles Davis, and another grand master, who fills 80 next month, Wayne Shorter. In a stream of grand moments, the dialogue went in amazing fluidity. It was, definitely a peak, as it was anticipated by us.

After the concert, there were also sweet moments, back stage. When Hancock and Corea saw Hiromi, arguably the most exciting performer of jazz piano, who was discovered by Corea, while in Japan - they were all smiles.

When I took their picture, also joined by an enthusiastic Stefano Bollani, Hancock said to Hiromi: 'Here you have it, two descending stars and two ascending ones!' 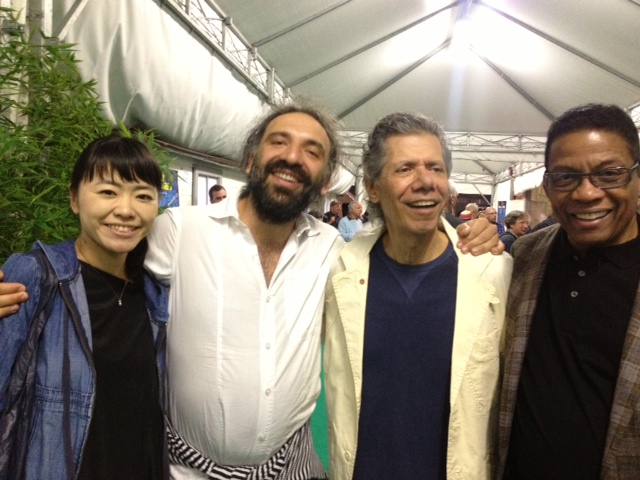 History of jazz is all improvisation in continuum, as he so astutely indicates. Two nights later, Hiromi, with a power trio, consisting of the ever-amazing Steve Smith on drums and Anthony Jackson on bass, delivered again a menu that amazed and inspired. She is following the path of maestro Ahmad Jamal, with a wide array of dynamics; full of energy, ideas and surprises. 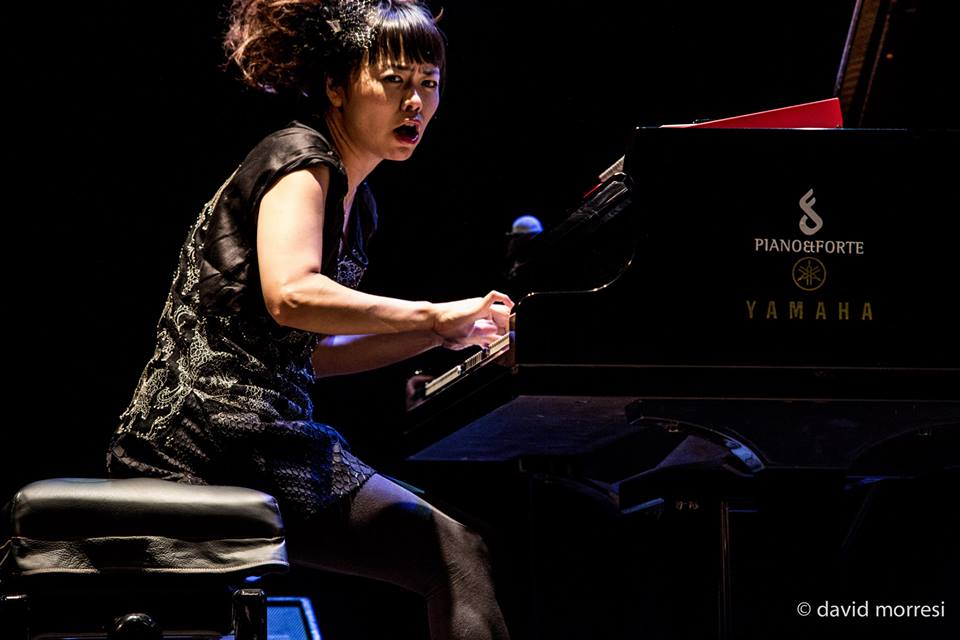 If one should mention a disappointment, and a big one for the festivalgoers, it definitely belonged to Keith Jarrett.

Crankier than ever, and for no good reason, he reacted to a few people taking pictures - before the concert began - and apparently 'took revenge' by ordering all the lights and played at a stage as a dark hole. He showed a remarkable lack of inspiration, mostly playing in routine. Despite the lighting of stage in second part, the public was not impressed. Nor were the other members of his famous trio, apparently dismayed by his negative attitude.

Such a pity that he will not be remembered, as also the other pianists, such as George Cables (who played with the septet, called the Cookers), Joey Calderazzo - with Branford Marsalis Quartet - and Michel Camilo - playing duo with Tomatito - who all served all they had to a happy audience in the elegant Morlacchi Theater.

As the 10-day celebration of 'Umbria Jazz 40' ended with a well-deserved Brazilian Night, bringing together Gal Costa and Gilberto Gil, we the devotees of this region, and global music forms dedicated to freedom, felt in gratitude. Most of the thanks should of course go, along with the team led by Annika Larsson, to the 'human engine' of the entire festival, Pagnotta, soon 80, who definitely is one of the most charismatic figures of the European culture today.

May he live long enough to see Umbria Jazz 50 - and way beyond. 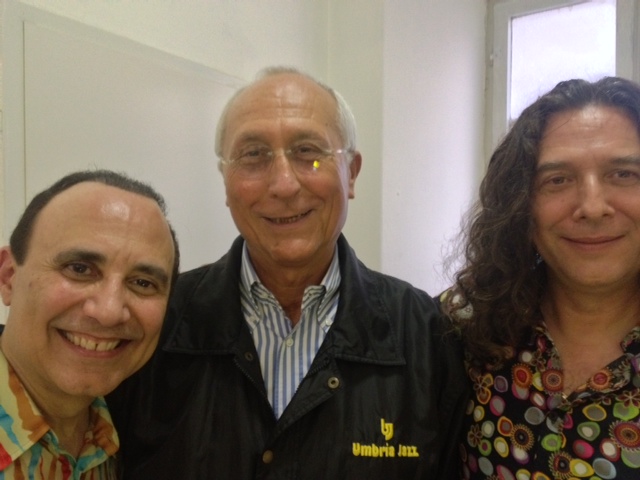