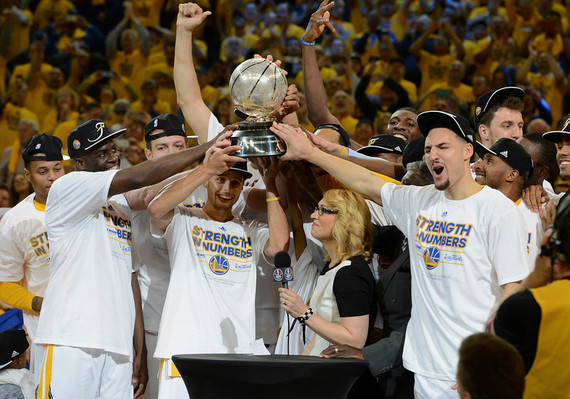 The city of Oakland has been in discussions over moving professional teams out of the area for years. It has been a debate more than the United States financial budget. But last night, no one cared after the Warriors defeated the Houston Rockets 104-90 to move on to the NBA Finals for the first time in 40 years.

It was more than a celebration for the fans, but more a declaration for city that's waited almost a decade to honor a sports team in their own backyard. Is it possible for the Warriors to join the likes of the San Francisco 49ers and Giants in brining a championship to Oakland as they've done for the city of San Francisco? Only seven days until the Warriors host NBA's best player, LeBron James, and the Cleveland Cavaliers.

"The Bay Area has been waiting for 40 years," said MVP Stephen Curry. "I think it's time."

Looking back no one imagined they'd get this far, but for a group of young guys and old veterans, the Warriors took it day by day. When they surpassed the franchise-best 59 wins done in 1975-76, it began to sink in. What else could be accomplished this season? First-year head coach Steve Kerr was second-runner up in voting for Coach of the Year and Curry won the season's MVP award, something the franchise hadn't celebrated since Wilt Chamberlin won the honors back in 1960. 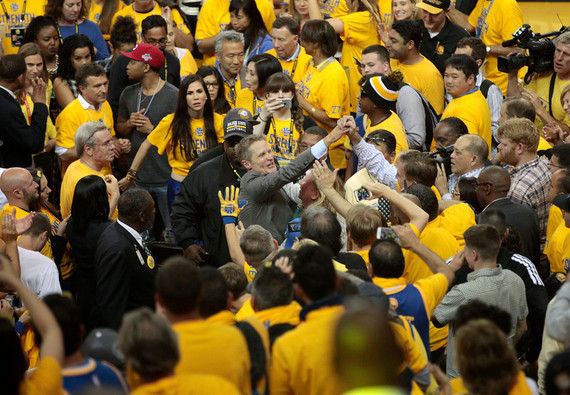 After three years of losing in the playoffs, the Warriors finally got it right. They have an opportunity to go all the way but first will have to get past James, a four-time MVP recipient and two-time NBA champion. During the regular season both teams split two games with wins at home for each team. However, James sat out of the Warriors' win at home and scored 42 points in the Cavs' win in Cleveland.

"I always think of Pat Riley's quote when coaching in the NBA," Warriors head coach Steve Kerr said. "There's winning and there's misery. It's more than a relief. It's a joy. Our players are feeling it. I know our fans are."

Kerr's emotions are no different from the players. None of them have been here before. Kerr was a five-time NBA champion as a player winning four championships with the Chicago Bulls and one with the San Antonio Spurs. Playing along side the best player in NBA history (Michael Jordan), Kerr knows talent when he sees it. And when it comes to Curry, he stands alone as one of the best shooters in the league.

The true test has come. Both teams match up very well and it will be unlike the previous teams faced in the playoffs. The Cavs were clearly the best team to come out of the East, and the Warriors face their toughest competition. They've been able to hold their opponents off with great defense, but the Cavs use this strategy as well. There's no prediction that the Warriors will be able to finish off the Cavs in four or five games.

"We're very resilient," said Curry. "There's obviously storylines throughout the playoffs, the things you have to go through to get a championship. Everybody's got be determined, everybody's got to do whatever comes your way, you've got to get through it."

We foretell a seven-game series to determine a new NBA champion. This is the first time a pair of rookie head coaches will meet in the NBA Finals. Kerr or David Blatt will become the first rookie head coach since Pat Riley to win a championship. The next seven days off will be a time to reflect and ascertain the path that led both teams to this point.

The two best teams will face for the ultimate goal, a NBA Championship. The Cavs have never won a NBA championship while the Warriors look to add a fourth trophy to their display. There's no doubt this will be a battle to the very end. A new champion will be crowned next month, until then we await next Thursday's arrival.