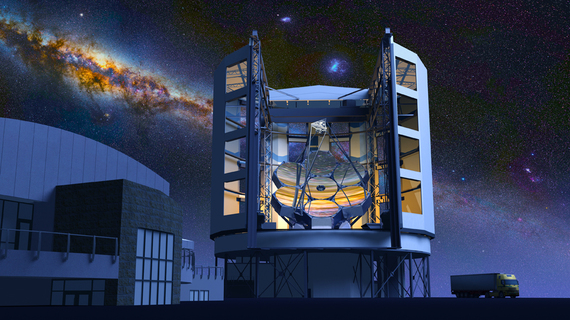 Four hundred five years ago this week, Galileo Galilei demonstrated his new telescope to members of the Venetian senate in the Plaza San Marco. This presentation on Aug. 25, 1609, marks the birth of the astronomical telescope and the launching of a scientific revolution.

It is fitting that Galileo's telescope was unveiled in Venice, the cradle of glass making. In the 15th century master glass makers from Murano Island, off the coast of Venice, discovered the process for producing clear glass and opened the door to the production of lenses -- curved, transparent glass shapes that magnify the objects behind them.

In 1608 Dutch lens maker Hans Lippershey filed a patent for the telescope, an instrument "for seeing things far away as if they were nearby." The following year Galileo improved on Lippershey's techniques to create the first truly useful telescope. Its front, or "objective," lens was only 36 millimeters in diameter, and the images that it made were blurry by today's standards.

The great innovation that Galileo made, however, was not just improving the telescope but putting it to new uses.

Rather than peering at distant buildings or people, Galileo trained his telescope on the heavens. What he saw changed the world. Galileo's telescope revealed the moons of Jupiter and their motion around the giant planet, the phases of Venus as it orbits the Sun, craters on the Moon and blemishes on the surface of the Sun, two bodies previously thought to be the embodiments of geometric perfection.

The history of astronomy, and much of science, is a virtuous cycle of technology enabling discovery and discoveries pushing the frontiers of technology. The development of the telescope and the evolution of our understanding of our place in the cosmos is the story of discovery writ large -- on a canvas without borders or boundaries.

For three centuries telescopes like Galileo's, those that use lenses to focus light, drove the growth of astronomy. These precision optical systems, made by master instrument makers first in Europe and then in the U.S., were used to explore the structure of the Solar System, to measure the distances to stars, to "weigh" them through painstaking observations of their minute motions, and to inventory their chemical compositions. These Great Refractors -- masterpieces of optics and metal work -- can be seen today as museum pieces in Munich, London and two great American observatories, Yerkes in Chicago and Lick in San Francisco. The Great Refractors of the 1880s and '90s were never to be surpassed by telescopes based on lenses, as the material properties of glass limit the size of transmitting lenses to about one meter in diameter.

In 1668 Isaac Newton produced a type of telescope quite unlike Galileo's. Rather than using transparent lenses, it employed curved mirrors to bring the light to a focus.

For more than a century these reflecting telescopes played second fiddle to the refractors. The great advance that made giant telescopes possible was the transition away from mirrors made entirely of metal, which were subject to oxidization, to mirrors made of glass covered with a thin coating of metal, typically aluminum or silver.

The advent of metal-on-glass mirrors led to a golden age of astronomy. In the early 20th century George Ellery Hale created a series of large telescopes in Southern California, first at Mt. Wilson and then at Mt. Palomar. Edwin Hubble used the Mt. Wilson reflecting telescopes to discover that the Universe is filled with galaxies that are racing away from us, showing that the Universe had a beginning and is not static.

By the mid-20th century it appeared that reflecting telescopes had also reached their limit. For 50 years the Palomar 200-inch telescope reigned uncontested as the largest on Earth. Then, in the 1980s and '90s, a series of technological breakthroughs led to a generation of telescopes with diameters of 8 to 10 meters, twice that of the Palomar telescope. These telescopes, and others on the ground and in space, have shown us that the Milky Way galaxy is teaming with planetary systems, many of which are quite unlike our own solar system. 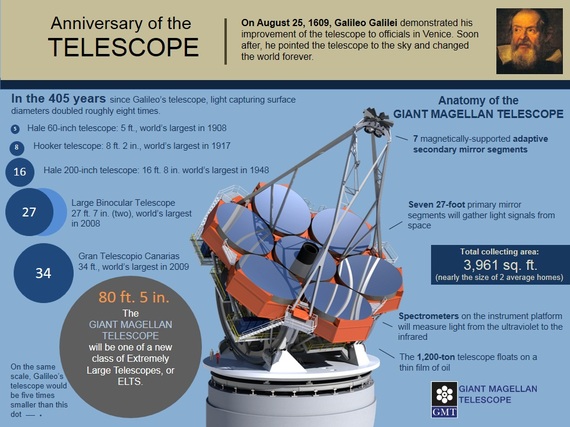 Today we are on the brink of a new generation of astronomical instruments -- three giant telescopes comprising a suite of individual mirrors that bring light to a common focus. The Giant Magellan Telescope, being built by a consortium of U.S. universities and institutions in Australia, Korea and Brazil, builds on the legacy of the Mt. Wilson and Palomar telescopes and their successors in Arizona and Chile by using a small number of giant mirrors, each 8.4 meters in diameter, to create a coherent optical telescope nearly 700 times larger than Galileo's first refractor. Two other giant telescope projects, one based in Europe, the other a Pacific-Rim collaboration, use large numbers of small mirrors to create a large light-collecting area.

In 1609 Galileo turned his telescope to the heavens and revealed the true structure and organization of our solar system. The Giant Magellan Telescope and its brethren will allow astronomers to directly see planetary systems around other stars and understand their structure. This will provide us with our best hope for answering one of humanities oldest questions: Are we alone?