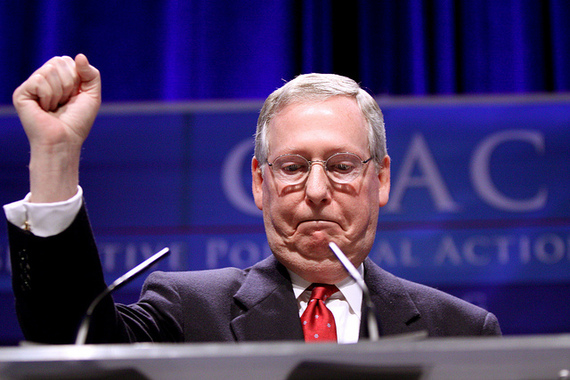 Before reading, please be advised that this post contains some graphic footage of the Iraq War.

If I had to experience the firefight below, I would hope that Congress would give me the required time to heal from the psychological and emotional repercussions of battle:

As a citizen who never fought for this country (like most Americans), simply taking a glimpse at the video above makes me pause for a moment. If I can't stand watching a mere video, imagine what would happen to me, and you, if we experienced them? I know that I'd need the necessary and ideal time in between my tours in Iraq or Afghanistan to ensure that I came home with my sanity. Studies show that it takes 24-36 months to recover from deployment, but during the Iraq War, soldiers received only one year at home for a 15 month deployment.

On September 19, 2007, there were 44 Republican Senators who voted "Nay" on S Amdt 2909 - Time Between Troop Deployments. Before conservatives prevented any possibility of giving our troops more time away from battle, former Senator Gordon Smith (D-OR) spoke to lawmakers in support of the much needed law: "Our service men and women are under constant strain, spending more time in theater than they have with their families ...This amendment would provide our troops ample rest and recuperation, time to visit with family, and an opportunity to extract our troops from the stress of war."

Since there were fears in 2007 that the amendment proposed by Senators Jim Webb (D-VA) and Chuck Hagel (R-NE) would lead to an early exit from Iraq and Afghanistan, Republicans voted against a law that could have helped ease the stress of continual battle and fatigue. According to the Military Times in 2007, disagreement stemmed from fears that increasing troop times between deployments would risk the mission:

He called the amendment "pretty much of a back-door effort to get the president to accelerate the drawdown" of troops from Iraq.

Sen. Lindsey Graham, R-S.C., agreed with McCain that the surge is working. An Air Force Reserve lawyer, Graham said he has deployed to Iraq three times. Earlier in the war, he said, troops' morale was exemplified by a soldier who said he felt "like I am waiting to get shot. This summer, however, a more typical response to 'How's morale?' was 'Colonel, we're kicking their ass,'" Graham said.

Another Military Times article in 2007 explains some more GOP logic behind voting against the time between deployment amendment. As stated by Republican Senator Lindsay Graham, "If you want to take care of the troops, let them win."

Apparently, Lindsay Graham's "let them win" attitude and the Republican fear of "a back-door effort to get the president to accelerate the drawdown" let directly to thousands of veterans seeking treatment from the VA. Veteran suicides reached a record pace in 2009 and the issue of PTSD could have been mitigated to a great degree had Republicans allowed troops the necessary time needed to recover from war in 2007.

According to a study by the National Health Research Center, there is a direct link between dwell times (time between deployments) and PTSD: "In 2007, the Mental Health Advisory Team (MHAT) found that soldiers on their third or fourth deployment in support of OIF had a signiﬁcantly higher risk of mental health and work-related problems than did soldiers on their ﬁrst or second deployment."

Therefore, it's safe to assume that the recent death of veterans in Arizona was a politically expedient way for the GOP to erase history. If lawmakers were aware that insufficient recovery times between deployments would lead to problems, they should have acted sooner, rather than later at fixing the VA.

Veterans around the country, including John Stoltz of VoteVets.org warned the country in 2009 of the increased rates of suicide among soldiers and veterans:

The news gets more and more troubling when it comes to Army suicides, which continue on a record pace, according to the latest report. March and April saw 13 suicides each. May saw 17 suicides...First, it isn't just the stress in the field, it's the stress of having to do multiple tours, with very little time at home...Imagine that you're in the Army and you do a year in Iraq, come home for under a year, are redeployed for another year, come home for a short period, and are sent out again. It's like being in a revolving door moving at supersonic speed, and just when you think you're out and can relax, they throw you back in. Eventually, you don't know which way you're going, or how to make it all stop. For some, sadly, taking their own life becomes the answer.

Instead of listening, Republicans continued with the "mission first, troops second mentality." According to PTSD expert Ilona Meagher in 2007, "Many of our troops have been deployed upwards of 3, 4, or 5 times. For the past six years, this high operational tempo has resulted in human and mechanical stresses and strains throughout the system."

Republicans got what they wanted and successfully blamed Gen. Shinseki for the VA crisis; pretending that the GOP emphasis on mission success over mental health never existed. They managed to circumvent their role in ignoring the lack of recovery times between deployments, an issue they knew about in 2007. This negligence led directly to the inability of the VA to perform the task of treating hundreds of thousands of veterans returning home from the longest wars in U.S. history.

Congratulations GOP, you've successfully utilized the Arizona veterans tragedy to your advantage. Congressional record, however, won't forget your role in the VA crisis.