Over the next few weeks at the United Nations the Nuclear Non Proliferation Treaty (NPT) Review Conference will be in session, and the central question is will it go down in history as another lost opportunity or the dramatic turning point that millions of people around the world are hoping for?

Daniel Ellsberg, the whistleblower of Pentagon Papers fame, wants to cling to the hope of a dramatic NPT turnaround, but he says recent history makes that hard to do. The 84 year-old Ellsberg was at the podium over the weekend at the Peace and Planet Mobilization Conference in New York City (April 24-26) where he worked to rally an estimated 7,500 people who had traveled from all over the world to have their voices heard. One thousand alone had journeyed from Japan and 80 were the so-called Hibakusha, survivors of the atomic bomb drops on Japan. Others traveled by foot in peace walks from California, Tennessee and New England. They also came on bikes from Washington D.C., and on buses and trains from Pennsylvania, New Jersey, Connecticut and Chicago. 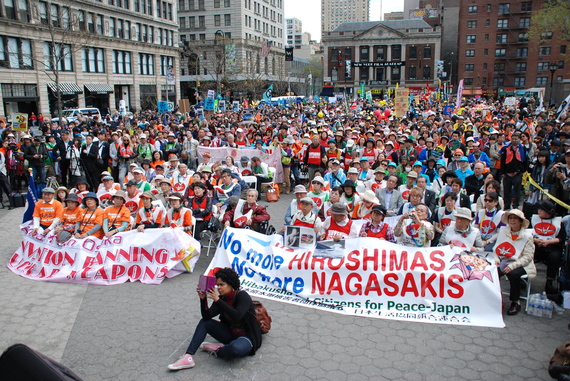 This year will mark the 70th anniversary of the atomic bomb explosions on Hiroshima and Nagasaki. Eighty survivors of those bombings took part in a rally at Union Square Park. Photo: Leonard Eiger 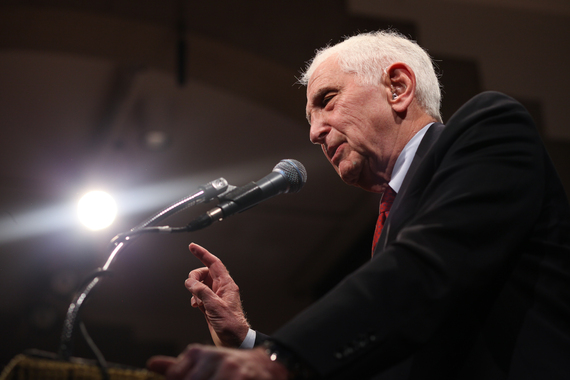 Daniel Ellsberg has been an activist for nuclear disarmament for 40 years. He is best known as "The Pentagon Papers" whistleblower. Photo: Kyle Depew/Peace & Planet

What they want the diplomats at the U.N. to push forward on is full implementation of the NPT including its Article VI, which calls on the nuclear weapon states to pursue negotiations in good faith on a treaty for nuclear disarmament. That's what the so called P-5, the world's first five nuclear weapon states, (the United States, Russia, United Kingdom, France and China) promised to do back in 1970 when the NPT went into force. Since then that promise has remained unfulfilled, and the number of countries with nuclear weapons states has grown to 9 (India, Pakistan, Israel and North Korea). Today the United States and Russia together possess 90% of all the world's nuclear weapons about 16,000 of them. 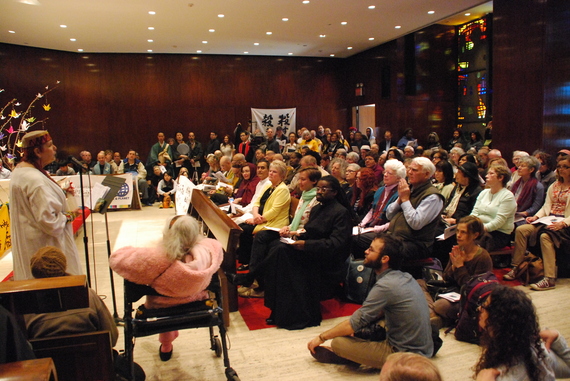 The Tillman Chapel at the Church Center for the United Nations brought together people from various religious faiths who prayed for an end to nuclear weapons during the Peace & Planet Mobilization weekend. Photo: Leonard Eiger

"The number of weapons has decreased between the U.S. and Russia but not to a level that precludes nuclear winter. We are far above the level that would cause nuclear winter, world wide famine, near extinction of the human species if we carried out our existing war plans," says Ellsberg who in 1961 wrote the guidance for operational nuclear war plans for U.S. Secretary of Defense Robert McNamara. " I know what those things do and they have not changed their potential of destroying life on earth if we carried them out," Ellsberg told me minutes before he addressed the Peace and Planet rally this past Sunday.

The NPT is reviewed every five years by state parties (189 countries are party to the Treaty) and civil society NGO's, in order to assess the Treaty's implementation. Ellsberg told me he was at the NPT Review Conference in 1995 when it was believed that a treaty outlawing nuclear weapons would be in place by the year 2,000. "Of course, that didn't happen," said Ellsberg, "and we are no closer now."

What's even worse news for proponents of nuclear disarmament is the Pentagon's plan to modernize America's entire nuclear weapons arsenal. "I find it amazing that there is not much of a debate on this modernization, "said Angela Kane the U.N.'s High Representative for Disarmament Affairs. The modernization plan is expected to cost American taxpayers as much as one trillion dollars over the next 30 years. 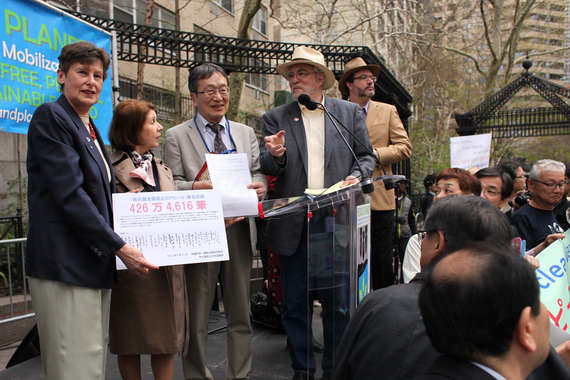 "The modernization is very costly but it is modernization that not only goes on in this country but in other countries as well, "said Kane adding that the plans unfold over the coming decades.

"This is not a modernization plan that is limited to the next three years. You know that nuclear weapons will continue in security politics of the country for quite a long time and that is a concern," said Kane who was on hand at the conclusion of the Peace and Planet march near the U.N. last Sunday to accept petitions signed by more than 7.1 million people calling for the implementation of Article VI, leading to a total ban on nuclear weapons. 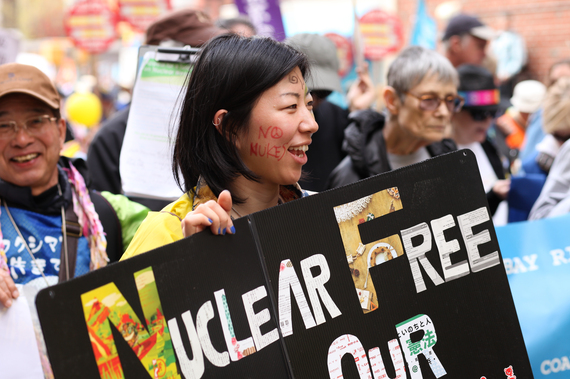 "What the non-nuclear weapons states are waiting for and all people are waiting for is an action plan that actually has steps for implementing and a timetable attached to it. This year is the 45th anniversary of the existence of the NPT. In five years time will be the 50th anniversary and that is a long time to be waiting for this," said Kane. 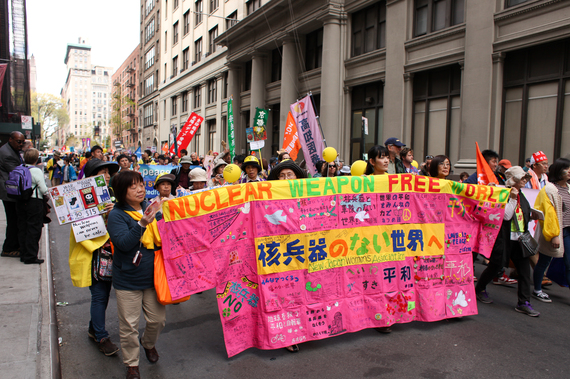 But dedicated activists like Jackie Cabasso may not be making their appeal to the NPT Review Conference five years from now if this year's turns out to be a bust. Cabasso, the Executive Director of the Western States Legal Foundation and one of the lead organizers of the Peace and Planet Mobilization weekend, told me there's great frustration among the civil society groups. "There are a lot of groups fed up and think we should move onto something, find some other strategy to pursue rather than focus on the NPT," Cabasso told me. 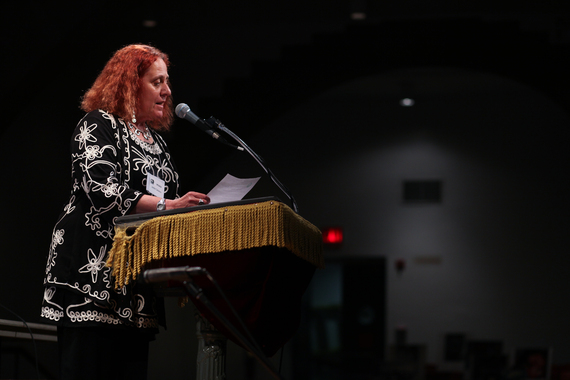 Jackie Cabasso, is Executive Director of the Western States Legal Foundation and was a co-convener of the "Peace and Planet" Conference. Photo: Kyle Depew/Peace & Planet

In an effort to gather more strength and political will at this year's NPT Conference, civil society groups drawn from the nuclear weapons, climate change, militarism, and economic and racial justice arenas banded together to form a broad coalition. "We realized we cannot win on nuclear weapons as a single issue. It is not big enough and nuclear weapons are integrally connected with a lot of other issues," said Cabasso. 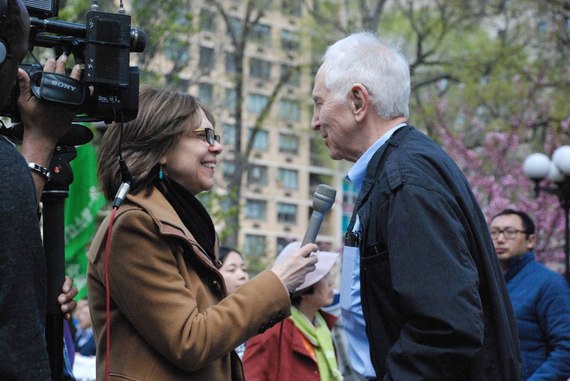 Daniel Ellsberg drafted the Secretary of Defense guidance to the Joint Chiefs of Staff on operational plans in the event of a nuclear war in 1961. Photo: Leonard Eiger

Cabasso, who has spent the last 34 years working full-time on nuclear disarmament, has borne witness to promising breakthroughs that have gone nowhere. For example, at the conclusion of the 2010 NPT Review Conference there was unanimous agreement to convene a conference by 2012 for the creation of a nuclear weapons free zone in the Middle East. That conference has yet to take place.

In view of the disappointments, I asked her if she was hopeful about achieving her overall goal. "No, not really," Cabasso said, "but you have to have hope. I am committed to non-violence and that, in itself, is an expression of hope. Non-violence is hope that things can change. "

Helen Young is in production on a documentary profiling the individuals on the frontlines of the global movement to abolish nuclear weapons. They include 85- year- old Sister Megan Rice who was convicted of sabotage and is currently serving time in federal prison.