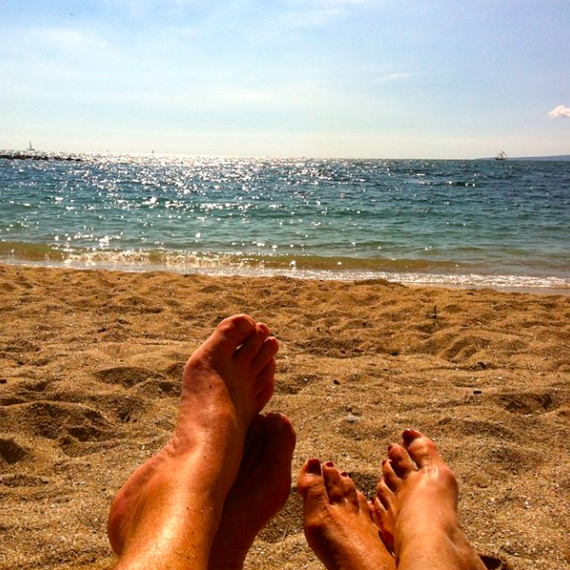 One of my friends keeps talking about leaving his wife. The two of them are great together when they're good. But they stink when they're bad because each of them makes it all about the other.

In a recent article on the five stages of relationships, I wrote about getting to stage five, where "being together is based on shared purpose rather than need."

My friend spends a lot of time in stage three, which is about loss of freedom. Over the years, small annoyances became big issues as hidden agendas came out. Now he feels resentful and is often in a power struggle with his wife. And he knows exactly what she "can't tolerate," so he has a well-stocked black bag of emotional missiles to throw at her.

He could instead perceive his wife as a mirror, giving him a reflection of himself. What would that mean? Every time he sees her best -- she's kind, smart, creative, funny, a good mother and a devoted wife -- he could acknowledge that these great qualities are active in him and that's how he drew the best out of her.

And every time he sees her worst, he could acknowledge that it's also active in him and she's just mirroring it. But instead of remembering that his problems are with him and not with others, he wishes she would be different.

Wishing that she would change won't produce positive change. Instead, he feeds what he protests and it grows stronger. Focusing on what's working -- how they are great together when they're good -- could turn the situation around.

We tend to think that being together equates with knowing each other well, especially over a long period. But unless we make an effort to keep things fresh, it's easy to slip into the fourth stage of automaticity and resignation, where there's a sense of loss and a tendency to give up and drift apart.

A good thing doesn't last without nurturing. And taking the quality of our relationships for granted, just because we know each other's routines, is no guarantee. So how can we get to stage five, and how can we maintain it?

One way is through Marathon Talking. Two people take turns talking for 48 hours. One talks for 24 hours while the other listens. Then they switch places.

It sounds extreme. It is. And it works.

The speaking partner can share whatever he or she wants -- life stories, memories, turning points, fears, hopes, goals. The topic doesn't matter because, about five or six hours in, when it seems as if everything has been said, some kind of magic happens where both partners stop struggling to be accepted and understood.

For this to happen, the listening partner must listen without reacting -- no comments or gestures that express interpretation or judgment -- and without applying meaning based on his or her personal beliefs. By grasping the speaker's reasons for saying what he or she says, the listener can understand what is said. It means listening to the speaker's intentions without being sidetracked by the words.

To create success, the setting needs to be neutral, away from everyday environments and routines, without distractions, including other people, pets, jobs, televisions, phones, computers, newspapers, chores, responsibilities and commitments. That means food has to be delivered, or at least simplified, so that food-prep doesn't detour the process. Isolated walks are possible, and so are short naps when necessary.

It sounds like a lot of work and perhaps impossible to manage. Actually, it's a gift -- to listen devotedly to a loved one for 24 hours -- and then to share lovingly and unreservedly for 24 hours.

48 hours of exclusive positive attention is an extraordinary, restorative luxury, unheard of in this unrelenting 24/7 world. A new kind of communication takes place, where people begin relating from their hearts instead of their heads. And it's a rare opportunity for both partners to understand who the other person truly is.

I learned this technique from Paul Solomon whose work I compiled into The Wisdom of Solomon. This post is featured on The Good Men Project.