Nearly half the population believes UFOs could be a sign of extraterrestrial visitation.

A HuffPost/YouGov poll reveals that 48 percent of adults in the United States are open to the idea that alien spacecraft are observing our planet -- and just 35 percent outright reject the idea.

The poll was seen as vindication from the community of UFO researchers who often feel they are laughed off by government officials.

"It's always been intriguing to me how we act as though only kooks and quacks and little old ladies in tennis shoes believe in flying saucers. And it's never been true, at least for 30 or 40 years," said former nuclear physicist Stanton Friedman, who was the original civilian investigator of the events surrounding the legendary Roswell, NM, UFO crash of 1947.

Friedman is very outspoken on the idea that some UFOs are intelligently controlled extraterrestrial vehicles.

"The believers are far more quiet, but far more on the side of reality," Friedman told The Huffington Post. "When you look at the polls, it's clear. And I see the benefit of that, personally, because I've only had 11 hecklers in over 700 lectures. I've been out there, all over the place, in every state, 18 other countries, and I know that my audience is more than tolerant -- they're accepting. It's been one of the things that really has kept me going."

In the HuffPost/YouGov poll, conducted between Sept. 6-7, 1,000 adults were asked if they either believed or didn't believe that some people have witnessed UFOs that have an extraterrestrial origin.

When YouGov offered respondents the choice between "slightly disagree," "disagree" and "strongly disagree," those numbers added up to 35 percent who are skeptical of the notion that any UFOs may be alien-related.

However, nearly half of the adults surveyed (48 percent) resounded in the affirmative, leaving 16 percent who indicated that they weren't sure on either side of the ET issue. 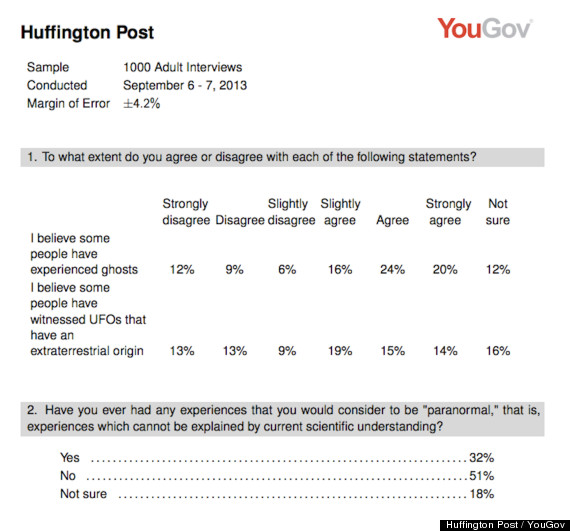 That 48 percent may seem like a much higher number from a HuffPost/YouGov poll earlier this year which showed that a quarter of Americans think alien visitors have come to Earth.

"The thing about that poll is that it had a really high percentage of people saying they weren't sure," said Huffington Post polling director Emily Swanson. "In this new poll, we have a couple of things that maybe pressed some people into having a stronger opinion.

"One of those things is that we gave people a lot of gradations of the ability to agree. We had 'strongly agree' to 'only slightly agree.'"

Swanson further explained how, in the previous poll, "we asked about aliens coming to Earth. In the new poll, we're talking about UFOs of extraterrestrial origin and whether people have seen or experienced those. There may be a difference in terms of how people are interpreting that.

"Some people might be imagining aliens coming to Earth -- meaning like little green men actually on the ground. Whereas, a UFO, in theory could be an unmanned spacecraft, just some kind of contact with alien technology, and not necessarily actual aliens being on Earth physically. It's very interesting that the people who are on the fence actually seem to be somewhat inclined to say that they do believe."

The breakdown of responses include:

-- Those who believe that some UFOs are alien in nature include 49 percent of men and 48 percent of women.

-- College grads in this category show up at 37 percent while 53 percent of those who went to college but didn't graduate are among the UFO-ET believers.

-- From a political perspective, the ET believer camp reveals 58 percent to be Democrats, 47 percent Independents and 37 percent Republicans.

Based on these current survey figures, Friedman would like to see fewer UFO eyewitnesses labeled as kooks.

"Polling has one advantage: Nobody knows who you're talking to. It's anonymous, and people are willing to say things if they know it's not going to be attributable to them," he said.

Here are some notable politicos and their UFO connections.

And faster than you can say "Boo!" the HuffPost/YouGov also asked respondents if they believe that some people have experienced ghosts.

Within the breakdown of adult Americans who responded in the affirmative:

-- 61 percent of total respondents believe in ghostly interactions -- more than the 45 percent of adults who said they believed in ghosts in a HuffPost/YouGov poll in December of 2012.

-- Those who are believers include 68 percent of women compared with 52 percent of men.

-- Politically speaking, Democrats are most likely to believe that people have experienced ghosts, at 69 percent, followed by Independents at 61 percent and Republicans bringing up the rear at 49 percent (the same order they appear in the UFO-ET part of the survey).

Regardless of your preferred party of affiliation, according to the History Channel, one of the most famous haunted houses may be the one that sits at 1600 Pennsylvania Ave. in Washington, D.C.

Check out these ghostly images.

The final question posed to the 1,000 surveyed Americans in the HuffPost/YouGov poll:
Have you ever had any experiences that you would consider to be "paranormal," that is, experiences which cannot be explained by current scientific understanding?

How would you have responded to these questions?