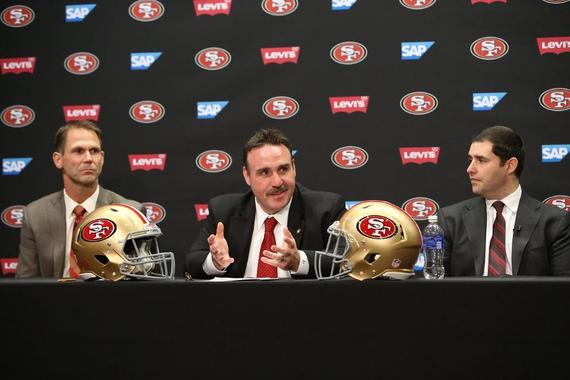 Santa Clara, CA - It didn't take long for the Forty-Niners to announce their new head coach yesterday. They decided to stay within the organization and promoted Jim Tomsula. The 19th head coach of the 49ers has been the defensive line coach for the past eight seasons. He also served as the interim head coach for the final game in 2010 after Mike Singletary was fired.

"There's no doubt in my mind, as we went through the process, that this was the right man for the job," General Manager Trent Baalke said.

Tomsula took the podium along side Owner Jed York and GM Baalke. He was humble when addressing his family, senior management, staff, players and the media. Tomsula took a trip down memory lane, talking about his journey that led him to this moment in time. He explained the expectations of the team and that he's the man for that job.

"I'm used to not normal and I'm very comfortable in not normal," Tomsula said. "I understand the responsibility and I understand that people are counting on things to get done the right way, a certain way."

Tomsula saw two head coaches get fired in his time with the 49ers. Now's his chance to take this embattled franchise to the Super Bowl next year. But the task won't be easy, with his expertise solely on defense Tomsula must develop a staff that will replace former head coach Jim Harbaugh's that was recently fired. The expectations are high yet Tomsula isn't the least worried.

"The ultimate expectation is winning the franchise's sixth Lombardi Trophy, preferably next season when the Super Bowl comes to the 49ers' Levi's Stadium," he explained. 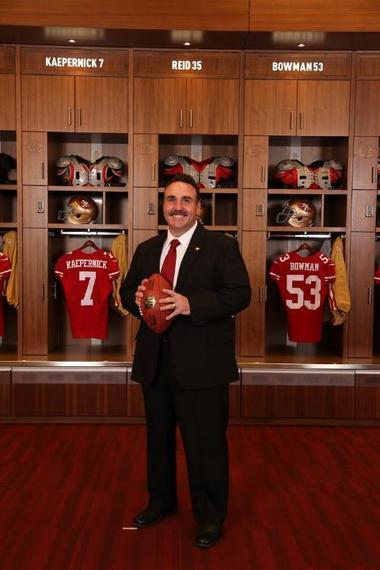 Without hesitation, Tomsula is ready for the challenge and has the players to back him 100 percent. Many expressed their satisfaction with the decision to hire within and taking no time to learn a new system yet the offense is questionable moving forward. Who coaches quarterback Colin Kaepernick? Who do the 49ers hire as the new Offensive Coordinator. While Baalke explained it's a process they confident they'll find the right people.

"We're going to bring in people to help everyone and not just Colin Kaepernick," Tomsula said. "Player development and teaching players and coaching players in skill development, I am passionate about that. I think that is very equally as important as the schematic itself."

"I'm really excited about working with him," FB Bruce Miller said. "With all the respect the guys have for him being a motivator and a teacher. His passion for the game and people make him different. As a head coach, he'll be a lot of fun."

The easy part is done and that's having the players buy in. What's left are the fans and management to impress. There's no doubt he has some big shoes to fill, Harbaugh took this team to the playoffs for three straight years. But one thing the former coach did leave behind was the chemistry created among the team.

As described by the GM, in this process a lot of moves will be made in the offseason. So it's too early to make predictions on the upcoming season just yet but Tomsula wants the message to be clear that unity among the team is most important. No one wants to look back at last season as a complete failure. Moving forward we want what's best for the team and the organization.

"I believe it takes a village, that no one man does anything by himself, the strength is in the people around them and the way people come together," Tomsula said.