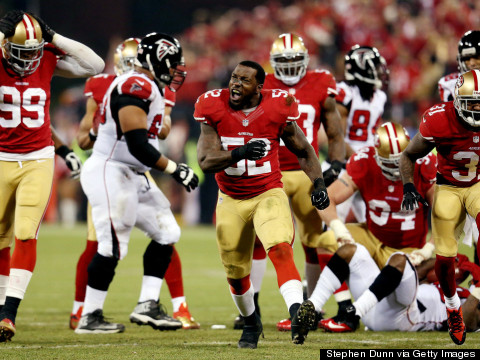 San Francisco, C.A. -- An unbelievable, yet spectacular way to end a game. NaVorro Bowman's pick-6 off Matt Ryan was the play that sealed the 49ers' (34-24) victory over the Atlanta Falcons, and clinched them a spot in the playoffs. Who could ask for a better ending to an era of phenomenal football?

Bowman missed the tackle that led to the Falcons recovering the onside kick with 1:10 left in the fourth quarter. But he got another opportunity that no know one saw coming. Ryan moved the offense into the red zone, after a shotgun pass to Tony Gonzalez for nine yards, the 49ers called a timeout.

"That was the -- that was one of the greatest plays I've ever seen," said head coach Jim Harbaugh. "That was a -- never been involved in a football game where something that good happened in a game. It was like a pick-and-roll in basketball."

"Yeah that is my best play," Bowman said. "I told Pat [Willis] I am good for one interception a year, and I'll take that one any day."

The next play Ryan threw a deep pass left intended for Levine Toilolo, but it was intercepted by Bowman who returned it 89-yards for the touchdown. It was a remarkable finish to what could've been a devastating loss. San Francisco will head back to the playoffs and try to redeem themselves after losing to the Baltimore Ravens in the Super Bowl last year.

"It's great," said Frank Gore, when asked how special the win was in front of former players. "Especially to win and put us back in the tournament. To get back where we left off last year, and hopefully we can get the job done."

Steve Young, Dwight Clark, Jerry Rice, Terrell Owens to name a few, and the man behind the face of the franchise, Eddie DeBartolo, were all in attendance for the last game at Candlestick Park. It was a magical occasion as the past and present came together to pay tribute to a stadium that brought five Super Bowl Championships to the 49ers organization.

The "Stick" was built back in 1960, and became home to the San Francisco Giants through 2000, before moving to AT&T Park, better known as Pac Bell Park. The 49ers moved in 1971 and won their first Super Bowl ten years later in 1981. Joe Montana's winning touchdown pass to Clark, dubbed "The Catch," was honored tonight as the number one moment in the history of the team playing at Candlestick Park.

"Still emotional," Vernon Davis said. "It's going to be tough to take it all in, but, one day at a time. I'm going to miss this place, I'm sure my teammates are as well. But we're moving onto something new and something better."

San Francisco will be start next season in their new stadium being built in Santa Clara. The night just didn't end with Bowman's touchdown. After the game, ESPN's sports anchor, Chris Berman, talked with former 49ers Young, Rice, Owens, former owner Eddie DeBartolo and current CEO Jed York. Eddie presented the game ball to his nephew, York, in hopes that he'll bring home a Super Bowl, and male group, Boyz II Men, closed the festivities with several hit songs including: "It's So Hard to Say Goodbye".

The last time these two teams played was in the NFC Championship game when the 49ers won (28-24) to return to the Super Bowl for the first time in 18 years. Atlanta's season will end, heading into the final week of the season, with a 4-11 record.

The Falcons defense held San Francisco to a field goal in the first quarter. By the second quarter, they had taken the lead with a two-yard touchdown from Steven Jackson, and a 52-yard field goal from Matt Bryant. The Falcons ended the first half with a 10-3 lead over the 49ers, but that quickly changed after halftime.

Colin Kaepernick led his offense into the end zone to set up Anquan Boldin's 10-yard touchdown, to tie the game 10-10 at the start of the third quarter. Phil Dawson kicked a 30-yard field goal, Kaepernick ran for a four-yard touchdown and Frank Gore scored on a one-yard touchdown as San Francisco opened up the second half much stronger than they had started the game.

"We had to finish what we started," said Kaepernick when asked what was the message at halftime to make the team come out better in the second half. "We needed this win to get into the playoffs."

"Just making plays," Michael Crabtree said. "When we needed to make a play coming out of halftime that's what we did."

Looking back at the good and the bad times, the fans have stuck with the 49ers through it all. All week the team said: "It would mean nothing more than to get a win for the fans for the last home game." Tonight, San Francisco did just that, giving the sellout crowd another great memory at Candlestick Park. As for the players, Kaepernick's most memorable moment at the "Stick":

"I got my first start here," he explained. "I'll be the last quarterback for the 49ers to play in this stadium, so that's another thing that's going to be very memorable for me."

"It was special to get this win in front of our fans, they've been great fans since I got here in [2005]," Gore said. "The first six year years were tough for me, and I know for the fans. The last three years have been great, a blessing. We are trying to get it back like it was in the past, winning Super Bowls."

"My most memorable moment would be tonight," Patrick Willis said.