A note to all you poor souls designing crowd-sourced marketing campaigns for large corporations: 4chan exists -- so please be careful.

If someone had given this pep talk to the team behind Mountain Dew's recent "Dub The Dew" campaign, then the company's new green apple flavored soda wouldn't have almost been named 'Hitler Did Nothing Wrong,' 'Diabeetus' or 'Moist Nugget.' 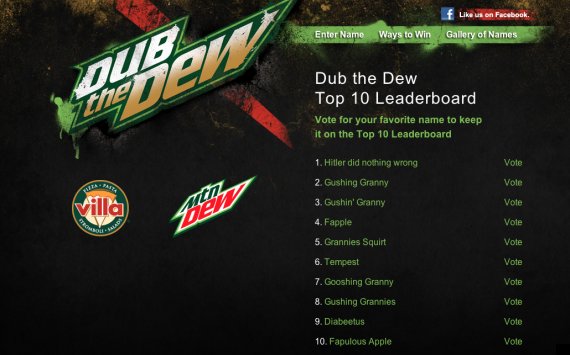 As HyperVocal hilariously put it, "Mountain Dew gave the masses naming rights to a new flavor (“with green apple attitude”), and it seems online pranks-’n’-memes factory 4chan got to it first."

Someone at PepsiCo obviously took notice, as dubthedew.com no longer exists, but some resourceful internet user has been passing around the url to a mirror site, which is still up for now.

There was speculation as to whether 4chan or Reddit were to thank/blame for this takeover, as both forums began pointing the finger at each other. Before the site was shut down, things got -- well -- messier for Mountain Dew after someone (maybe 9GAG, but as others have noted, they are 4chan's "mortal enemies," so there may be trickery afoot) hacked into Dub the Dew and ran an offensive and bizarre banner across the top of the page.

Reddit user Kayin_Angel made us laugh with this thought, "Could you imagine if 4chan put effort into doing something useful?" After we were done chuckling, however, we did remember that 4chan recently made headlines when they busted an unidentified Burger King employee who posted a photo of himself stomping on burger ingredients.

Be careful out there, citizens of the internet -- 4chan can see you.

The Most Offensive Beverage Ads