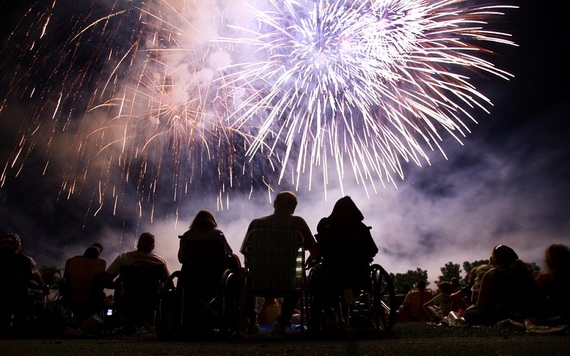 Americans have celebrated Independence Day with fireworks displays since the country's first Fourth of July in 1777. Today, the fireworks industry is big business, with average Americans spending millions of dollars on retail fireworks every year.

Although many cities and towns -- and their corporate sponsors -- keep the cost of annual fireworks displays a tightly guarded secret, the American Pyrotechnics Association (APA) reports that last year's revenue for display fireworks was $332 million; consumer fireworks revenue was even higher at a whopping $695 million. TIME also reported that the cost to put on a fireworks display for the public ranges from $5,000 to $30,000. Meanwhile, some consumers spend, on average, $100 and $300 on fireworks.

If you plan on celebrating the Fourth of July with fireworks this year, why not check out one of the the biggest, brightest and most extravagant displays in the U.S.? Here is a look at 10 of the most elaborate displays in the country, many of which are free to the public.

The Macy's 4th of July Fireworks display in New York is arguably the most famous Independence Day celebration of the 14,000-plus shows that take place across the country every year. It is even estimated that the display uses 55 times more shells than the average U.S. show.

Can't make it to the Big Apple for the Fourth? NBC will begin a two-hour broadcast of the event at 8 p.m. EST.

In 2014, APA named the Music City July 4th: Let Freedom Sing! fireworks display No. 2 on its list of the biggest "must see" firework displays. But this year, Nashville vows to put on the biggest Fourth of July fireworks show in the entire country, with one official promising to set off "at least one more [firework] than New York."

Music City is geared up for an entire weekend of festivities featuring performances by Martina McBride, Mikky Ekko and the Nashville Symphony. For those who can't make it to the celebration, the show will be streamed live on VisitMusicCity.com.

The National Park Service in Washington, DC, puts on an annual Fourth of July fireworks show at the National Mall. The show lasts for about 17 minutes and lights up the Washington Monument, Thomas Jefferson Memorial and Lincoln Memorial.

Security will most likely be tight, but spectators can enter the Mall through specific entry points. The show will be accompanied by live music from "A Capitol Fourth" on the U.S. Capitol's West Lawn. If you want to make a day of it, head to the National Independence Day Parade, which starts at 11:45 a.m. But get there early to secure a good spot, and bring a blanket to sit on for the nighttime fireworks.

Related: How Your Fourth of July Barbecue Helps Our Economy

The 2015 Boston Pops Spectacular is -- with the exception of maybe Philadelphia -- most closely associated with American independence. In 1976, the bicentennial celebration drew crowds so large that the Guinness Book of World Records cited it as the largest audience ever assembled for a classical concert.

This year's spectacular will be produced by Fireworks by Grucci, which has the Guinness World Record for the world's largest fireworks display. President and creative director, Phill Grucci, said the display will feature the letters "USA" in red, white and blue. Also, expect "the grandest of the grand finales." Gates open at 9 a.m., and the fireworks are set to begin at 10:30 p.m.

It is impossible to talk about the Fourth of July without including America's birthplace: Philadelphia.

Philly's own The Roots will headline the fireworks show billed as "the largest free concert in America," and other special guests include Jennifer Nettles and Miguel. On Fourth of July, there will be an Independence Day Parade throughout historic Philadelphia, and the Philly 4th of July Jam and Grand Finale Fireworks will take place between 7:30 p.m. and 11 p.m. If you can't make it to the actual concert, you should be able to see the fireworks display over the Philadelphia Museum of Art.

Atlantic City, N.J., hosts two Independence Day fireworks displays this year: one on Friday, July 3 and another on the Fourth of July.

The first show will be launched from two separate ocean barges and can be seen from the beach or the Atlantic City Boardwalk and Steel Pier. The second show is in the Marina District and can be seen from vantage points throughout the Marina and the casino resorts. Each show is preceded by a celebrity reading of the Declaration of Independence.

Chosen by the APA as one of the 10 best shows in the country last year, the fireworks display in Houston takes place at the newly renovated Eleanor Tinsley Park. Hometown Houston son Clint Black and double-platinum selling singer/songwriter Josh Turner will headline the concert that precedes the show.

The Southwest Airlines Freedom Over Texas fireworks show is in its 29th year, and general admission is only $8 per person. If you wait until the last minute and buy tickets the day of the event, it will cost you $10 per person. In addition to a fireworks finale sponsored by CITGO, the event will feature a kids zone with free rides and games, a beer garden and more. The celebration starts at 4 p.m. and ends at 10 p.m.

The Waterfront Blues Festival in Portland, Ore., is one of the biggest annual events in Portland. Along with a host of musical artists, the festival -- which runs July 2 to July 5 -- will feature an Independence Day fireworks show.

To see the largest Fourth of July fireworks display in Oregon, you have to donate at least $10, which goes to Oregon Food Bank. But the donation will be worth it. Produced by Western Display Fireworks, the 22-minute show will include more than 11,000 shots. Head to the banks of the Willamette River for the best vantage point or, if you're feeling ambitious, view the fireworks from Mt. Tabor.

Read: 50 Freebies and Discounts for Fourth of July Weekend

The Fourth of July fireworks show in Las Vegas is unlike any other for several reasons, but the main reason: The fireworks in the sky plus the dazzling lights on the strip make Sin City even more spectacular. No matter where you are, you'll likely see multiple fireworks shows all in one night.

Some of the resorts and casinos that will be launching fireworks this year include Mandalay Bay -- with performances by 311 -- and Stratosphere Tower's Fireworks Spectacular.

Lake Tahoe Lights on the Lake 4th of July

Lake Tahoe spans the Nevada-California border, and the Independence Day fireworks show on the California side at South Lake Tahoe is considered to be one of the premier shows in the country.

You can see the show over the lake, which starts at 9:45 p.m., from many different locations around town. For example, you can watch it from Nevada Beach, on board the Safari Rose yacht or even at Timber Cove Marina. According to the APA, "Tourists have joined the locals for years to enjoy this most breathtaking visual experience."

This article originally appeared on GOBankingRates.com: 4th of July Fireworks: The 10 Most Extravagant Displays in the U.S.