Besides advice on feeding babies, parents aren't given much support when it comes to the 18 long years they have to feed their children. As a result, many assume that food-related behaviors, like picky eating, are a cause for concern when most of the time they are a normal part of growing up.

So here are five common feeding challenges, why they occur, and positive ways parents can respond.

1. Throwing food: Most babies do well with food introduction and move to self-feeding. The good news? This is a time when children are very open to tastes and textures so parents have a great opportunity. The bad news? Around 12 months, babies not only eat the food they are given, they throw it.

Why? The sensorimotor stage, defined by Jean Paiget, details how babies problem solve the first two years. Around 12 to 18 months babies experiment with sounds and objects to see what happens. So a baby thinks "I wonder what will happen when I throw that meatball? Wow it splatters on the floor, cool!" This is how they learn, but it doesn't making any less annoying.

How to respond: First off, don't give too much food for baby to throw in the first place. Second, by the time a child is throwing, they probably aren't hungry. Let them know the meal is over when the throwing occurs and give them items they can throw (like a soft ball).

Why? There are two things changing: growth and development. The fast growth that occurred during the first two years slows way down after two, so children are less hungry. And food neophobia (fear of new food) peaks between the ages of 2 to 6, making children less excited about trying new items.

How best to respond: Satter's Division of Responsibility helps you avoid the battles and power struggles so common at this age. It goes like this: parents decide the what, when and where of feeding and children decide the whether and how much of eating. This not only helps keep the peace at mealtime, it helps children regulate internal cues of hunger and fullness.

3. Confidently "hungry" or "full:" When a child says she is hungry, it makes parents feel like they need to instantly cough up some food. And nothing annoys a parent more than when a child says he is full, only to ask for a snack an hour after dinner. But both of these statements don't always mean that a child is hungry or full.

Why? Children learn at a young age that saying "hungry" will get them food they want to eat and saying "full" may get them out of eating a disliked meal. That doesn't mean that children fib on purpose, they are simply learning what these words mean and need guidance from grownups.

How to respond: In my book Fearless Feeding, my coauthor and I show parents how to structure meals based on intervals of eating that makes sense for a child's age. For example, a 2-year-old needs to eat every two to three hours while a school-age child can usually go for about four hours between meals.

By reasonably structuring regular meals and snacks in a designated place, children learn to eat for hunger instead of habit. And by always having at least one thing at the table your child accepts, you avoid children saying they are "full" just to get out of eating.

4. Desire for sweets: When I get emails from parents about food obsession, it usually occurs around age 3. All of sudden, they say, their child becomes obsessed with sweets, whining for them nonstop.

Why: Besides the fact that sweet tastes are universally preferred by children, research shows around age 3 kids become more sensitive to external cues in their environment.

How to respond: First, stay neutral about sweets by not using them as a reward, taking them away as punishment or making a big deal about a child's consumption. When a child asks for sweets, instead of "no" let them know when they will have the item again. Next, find an offering of sweets that works well for your child. Maybe instead of once a week, you offer them 2-3 times, or if a child has been getting too many, decrease them to something more reasonable.

5. Wants what Johnny is having: When children reach school age there is a whole new set of influences on their eating. And these influences aren't always as positive as parents like.

Why? In Fearless Feeding we explain it this way:

The desire to belong is a normal part of development, and eating what other friends eat is part of belonging. This desire is strong enough to change not only what and how much your child eats, but also how she feels about herself. Media images and food ads also have this power.

How best to respond: Research shows parents are the most important influence over their child's eating. Continue to cook family meals, be a healthy role model, provide nutritious foods at home and keep an open dialogue about food, nutrition and outside influences.

If parents can learn to expect feeding challenges, instead of reacting in a knee-jerk fashion, they can respond in a thoughtful way.

How have you dealt with feeding challenges? 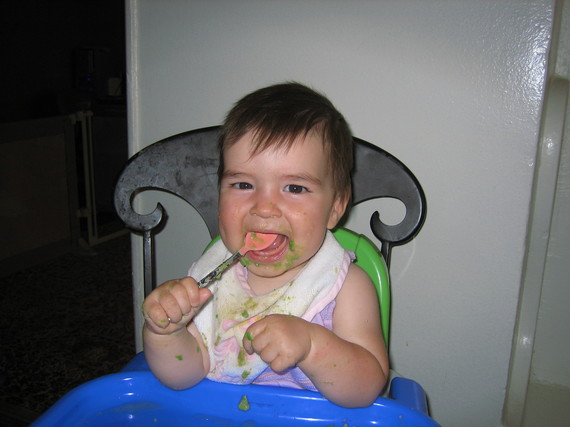 More:
Parentschildhood nutritionChildhood Obesity
Newsletter Sign Up
Raise the kind of person you'd like to know
Subscribe to our parenting newsletter.
Successfully Subscribed!
Realness delivered to your inbox