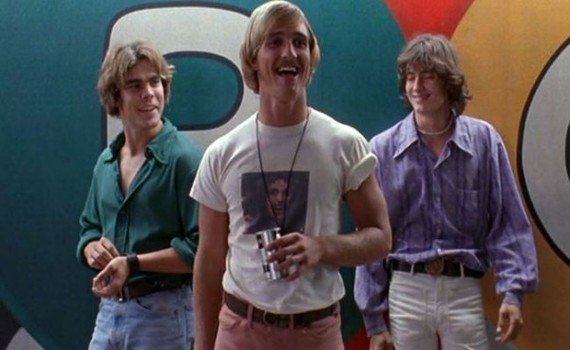 Fall is now upon us, and whether we're 15 or 65 years old, it's impossible not to associate this time of year with that the pros and cons of being back in school. The pros: chilling with your friends again, showing off your sick wardrobe. The cons: well, pretty much everything else. Here are five movies (in no particular order) that perfectly capture the education system in all its grief, guts, glory, and grandiosity...

The Breakfast Club (1985)
The Brat Pack packs a punch! And yes, Saturday detention has never been more fun. Or tense. Or emotional. Or powerful. Or hilarious. John Hughes at his best - no holds barred. Plus, I looked exactly like Anthony Michael Hall did at that age, so I feel the dude's pain. Can't say I'd try to shoot myself over a broken shop class elephant lamp, but hey, to each their own.

Hoosiers (1986)
Hey all you non-sports folks out there: ever wanted to learn about basketball? From its high-speed game dynamics to the history of its sweet kicks? This character-driver high school drama is the perfect place to get started. Gene Hackman signs up as coach of a tiny Indiana high school basketball team. And they're a rag-tag group to say the least, especially after three of the best players quit on day one. Yet somehow, some way, these young misfits rise to the occasion to do something truly great. Prepare to be inspired.

It's the last day of high school circa 1976, and a bunch of young Texans are dealing with the monumental event in their own way. Drinking, dating, talking, fighting, and more talking - just as you'd expect from A) the 1970s, and B) writer/director Richard Linklater. Plus, put-near every 'kid' in this flick went on to be an A-list celeb. Pretty sweet deal!

I recall catching this movie on - perhaps ironically - the last day of 10th grade. And to this day it remains my favorite Rodney Dangerfield flick. He plays Thornton Melon, a wealthy fellow who enrolls into college to be closer to his semi-estranged son. And with supporting roles by Ned Beatty, Sam Kinnison, Robert Downey Jr., and M. Emmet Walsh, it's no slouch in the acting department either. Finally, Rodney gets some of that respect he's always wanted.

Napoleon Dynamite (2004)
A quirky small-town teen deals with bullies, annoying relatives, and overzealous martial arts masters in this hilarious coming-of-age comedy. The uber-goal? To help his newfound pal Pedro win the class presidency. Perhaps a tasteful dance may swing the vote their way? Click below and see for yourself.