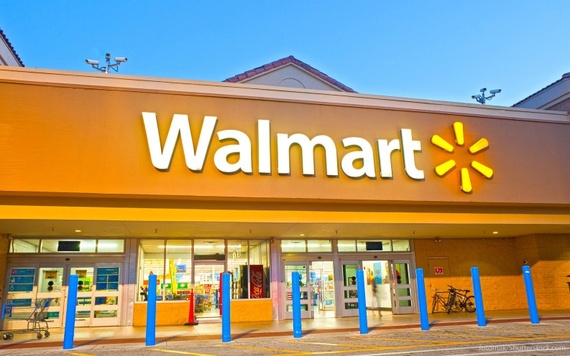 Walmart, the largest private employer in the country, has a reputation as a terrible place to work, and is often targeted by activists for its low wages and unfair labor practices. Although some of these claims have merit (for example, sales associates typically make just $9 an hour, according to salary data from Glassdoor), there are many Walmart employees who report high job satisfaction and high paychecks.

If you're thinking about pursuing a career at Walmart, or curious how your job compares, here are the five best and five worst jobs at Walmart.

Even though Walmart has a reputation as a low-paying and demanding employer, there are some jobs that pay very well and report high employee satisfaction -- especially if you are in management. Here are the top five best jobs at Walmart.

Store manager is one of the best jobs you can land at Walmart, according to Joni Holderman, a professional resume writer and founder of Thrive! Resumes. "Few people realize that Walmart store managers can earn $150k to $250k+ per year in salary and bonus -- if their store achieves all its performance targets," she said.

A former Walmart store manager, who worked for the company for more than eight years, wrote in a review on Glassdoor that Walmart has a "great compensation package," and gives you "a chance to work with a diverse group of associates and customers."

While employee satisfaction rates are high and the pay is great, this job does not come without its stressors. Store managers run the show -- supervising all employees, meeting financial goals, enforcing regulations (and yes, firing people), delegating work, tracking inventory, analyzing sales data, processing payroll and coordinating merchandise shipments. It's a big job, but it has a nice, big paycheck.

Read: 10 Interview Mistakes That Could Cost You Your Next Job

Walmart assistant managers average $45,000 a year, which is right on target for the national average salary, according to Glassdoor salary data. If you factor in bonuses and additional compensation, the average pay increases to $48, 311 a year.

Assistant managers must have at least two years of college experience, or one year of retail and one year of supervisory experience. Job duties include meeting store sales and financial performance goals, ensuring compliance with procedures, managing and supervising associates and enforcing customer service guidelines.

While this might seem like a lot of responsibility for an assistant role, it's an excellent opportunity to gain experience and move up your career ladder. One former assistant manager in Amarillo, Texas, wrote in a review on Glassdoor that Walmart is a "great place to learn a skill and grow your resume, or grow with the company."

Shift managers at Walmart make an average base salary of just over $65,000, which is 8 percent above the national average, according to Glassdoor. The total compensation jumps to nearly $78,000 after factoring in the $18,000 cash bonus, $3,200 stock bonus and other financial rewards.

A current shift manager in Las Vegas, Nev., wrote on Glassdoor that the "salary for management is great," and a former shift manager in Big Spring, Texas, also wrote that Walmart is a "good company for beginners," they "work with your schedule" and "teach you the basics."

Shift managers have complained on Glassdoor about long days, difficult work/life balance and heavy workload associated with this job, but this job topped the list because there are great advancement opportunities for those who might not have a degree, and the pay is well above average.

The typical pharmacy manager at Walmart makes about $139,000 a year, which is 4 percent above the national average, according to Glassdoor data. When bonuses, like an average annual $23,800 cash bonus, are factored in, pharmacy managers make closer to $160,000 a year.

Pharmacy managers are responsible for driving sales and increasing profit in Walmart pharmacies and over-the-counter areas. They must ensure confidentiality of customer information and assigned records, model and enforce the company's customer service guidelines and oversee and implement community outreach programs. This job isn't just for anyone off the street either -- Walmart pharmacy mangers must hold a Bachelor of Science in Pharmacy or PharmD and carry a pharmacy license.

A current pharmacy manager in Albuquerque, N.M., said on Glassdoor, "I like this job better than any other retail I've been at." Other current and former employees said they sometimes face stressful and busy environments, long hours and demanding workloads. Still, this job is one of the best at Walmart because of its job stability, good benefits, room for career advancement and excellent compensation.

Order fillers at Walmart make an average of about $38,000 a year, according to Glassdoor. There is also additional annual compensation, like a $2,600 average cash bonus, $1,200 stock bonus, $1,100 profit-sharing and $220 commission-sharing. Order fillers are also eligible to make overtime, which can push compensation up to over $35 an hour.

Order fillers work out of Walmart distribution centers and are responsible for moving merchandise onto the company's fleet of delivery trucks and keeping the warehouse organized. This can involve working off hours and operating machinery in a fast-paced environment. An order filler from Buckeye, Ariz., said on Glassdoor "everything about this job is good" and that Walmart is a "great place to start a career."

Order fillers are 21 percent happier than other Walmart employees, according to job search and review website Career Bliss. A former order filler from Brundidge, Ala., reported to Indeed that the pay and benefits were good, but the job had "long hours." Despite the hours, this job made the list of top jobs at Walmart because it's a relatively high-paying entry-level position that doesn't require interacting with disgruntled customers or managing employees.

These five Walmart jobs made the list of the worst due to the largest pay gaps compared to management, high levels of stress and little room for career advancement. Click through to find out which Walmart jobs are the worst.

Cashiers at Walmart are responsible for scanning, bagging and loading merchandise at the checkout. Walmart cashier hourly wages range from $7 to $17, with the average falling at $9 an hour, which is "not bad out of high school, but hardly enough to live past that," according to one former employee on Glassdoor.

Employees also say the job entails a lot of stress, is very physically demanding and hours get cut during slow seasons, according to reviews on Glassdoor. Cashiers also must achieve the "Item Per Hour" and "Scanning" percentage goal, which can contribute to the demands and stress associated with this role.

One Glassdoor reviewer listed out their least favorite parts of the job, including "Hard to work for low pay, hours can be horrible especially for cashiers, late nights and early mornings..." Cashiers at Walmart also face monotonous tasks, long lines of customers and, as one former Walmart cashier in Junction City, Kan., wrote, "The customers are not always the happiest of people."

Inventory control specialists at Walmart work mostly in the back room of the store, and are responsible for all inventory that comes in and out, as well as transporting merchandise to the sales floor using forklifts or pallet jacks. Based on 92 salary reports from Walmart employees, the typical Walmart inventory control specialist hourly rate is $10, which is 100 percent below the national average, according to Glassdoor. When factoring in bonuses and additional compensation, the pay only increases to $20,396 a year.

Inventory control specialists are 37 percent less happy than other employees at Walmart, according to Career Bliss. Employees in this role report they feel understaffed and overworked, and that work-life balance is "severely skewed," according to Glassdoor reviews. The hours can be long and late, and one former employee said on Glassdoor that they kept the team "stocking past 1 am because they didn't have enough people that night."

In addition to meeting Walmart customers at the store's entrance, greeters also assist customers in getting shopping carts, providing store directions or other customer service duties. While that might seem easy, it's important to note greeters are also responsible for identifying potential security threats, or shoplifters, and cleaning floors and restrooms.

"Greeter may be one of the worst jobs at Walmart, when you realize that they are really security guards," said Holderman. "Studies show there is less shrinkage -- meaning shoplifting -- at retail stores where customers are greeted at the door."

In addition to the risky environment and stressful job responsibilities, the pay for Walmart greeters ranges from just $7 to $10 an hour, making it the lowest salary range on this list. One current employee also said on Glassdoor there's "no room for advancement if you can't stand on your feet for an entire 8 hour shift" and raises are only "0.40 to 0.50 cents a year."

Based off more than 1,100 employee reviews, Glassdoor reported that Walmart's current sales associates earn just $9.31 an hour. The typical salary is $9 an hour, or $18,750 a year, which is 100 percent below the national average. Not only is the pay low, but sales associates also have some unpleasant job responsibilities, including cleaning all areas of the store, performing routine maintenance on machines and other equipment, retrieving abandoned store carts, bagging customer purchases and stocking merchandise.

One current sales associate in Elkton, Md., said on Glassdoor the atmosphere is "friendly," but chances of promotion are "slim." Another sales associate in Clinton Township, Mich., does not like "dealing with rude customers and rude people." Given the low pay, few opportunities for advancement and unsavory job duties, this job ranks one of the worst on this list.

This is the one management role that made the list of worst jobs at Walmart. In addition to making just $22,470 a year, a far cry from the national average of $51,600 for the same role elsewhere, Walmart's customer service managers are required to fulfill a wide range of duties and hold a lot of responsibility.

A customer service manager spends a great deal of time enforcing proper operations in the store, according to its job description. This includes getting change for cashiers, preparing cash registers and auditing registers for shortages. They must also handle customer complaints and concerns, as well as training employees.

Read: 7 Signs You're at a Dead-End Job

This article, 5 Best and Worst Jobs at Walmart, originally appeared on GOBankingRates.com.