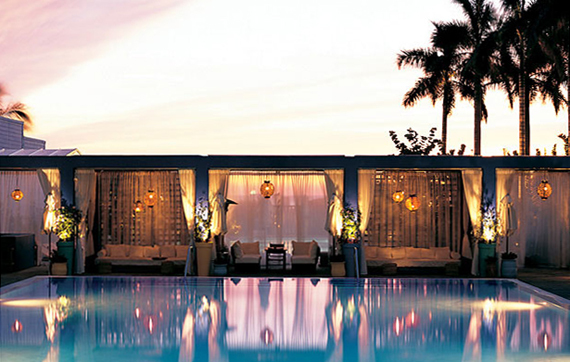 Want to vacation with the stars? At GAYOT's 5 Best Celebrity Spotting Hotels, you'll not only receive the A-list treatment, you'll also have the opportunity to rub elbows with the rich and famous. From private poolside cabanas in L.A. to penthouse suites in Rio, these discreet getaways offer the elegance and exclusivity that today's biggest actors and musicians require. However, whether you end up seeing stars or not, you're sure to enjoy the top-flight amenities, personalized service and world-class dining available at these posh resorts.

From Malibu beaches to Beverly Hills boutiques, Los Angeles is known for close encounters of the celebrity kind. But for an almost guaranteed star sighting, head to the Sunset Marquis Hotel & Villas. Just steps from the Sunset Strip, this hotel boasts a long history of welcoming big names, from Mario Batali to the Rolling Stones. An on-site recording studio makes it easy to see why the Red Hot Chili Peppers, Justin Timberlake and Sheryl Crow have all been found roaming the halls. Although private villas protect famous guests from the paparazzi, keep an eye out for celebs while catching some rays at the Mediterranean-style pool area.

Ever since Frank Sinatra and his pack of pals put Vegas on the star-sighting map, Sin City has been a top spot to gawk at celebs. Some can be seen at their high-profile shows -- Britney Spears, Elton John, Celine Dion, etc. -- while others can be found bunking down at the Palms Casino Resort. The hotel features suites, penthouses and villas with every imaginable extravagance, from a bowling alley to a basketball court complete with locker room. Other draws include hot nightclubs and a state-of-the-art recording studio. It's no wonder the hotel and its N9NE Steakhouse attract big names such as Justin Bieber, John Mayer, George Clooney, Mariah Carey and Bruno Mars.

The Carlyle, A Rosewood Hotel

While luxury hotels keep pushing the envelope in an effort to lure in the pretty people, The Carlyle continues doing what it has done best for the past 80 years. This refined hotel is a Fashion Week favorite and has hosted every American president since Truman -- most notoriously JFK, who is rumored to have rendezvoused with Marilyn Monroe here. Everyone who is anyone has wined, dined or bedded down at The Carlyle: Mick Jagger, Jack Nicholson, Nicole Kidman, David Beckham, Katie Holmes, Gisele Bundchen ... and the list goes on. Suites boast the perfect blend of taste and indulgence, Sense spa is a sophisticated urban sanctuary, and the Café Carlyle is the place to hang, especially when Woody Allen shows up to jam with the Eddy Davis New Orleans jazz band.

Read a complete review of The Carlyle, A Rosewood Hotel

London offers stiff competition for L.A. and New York when it comes to celebrity-filled hotels. Along with Old World favorites, such as The Langham, London and The Savoy, the Metropolitan brings in the stars. Among the A-list clientele: Tom Hanks, Johnny Depp, Kate Moss, Cameron Diaz and Jude Law. Perhaps they like the break from traditional style, since the décor is hyper-modern and the attentive staff is clad in cutting-edge Armani. Minimalist chic design sets a tranquil mood at the spa, and suites boast balconies overlooking Hyde Park and the London skyline. After dinner at on-site Nobu, head to Met Bar where star sightings are regular fare.

Read a complete review of Metropolitan by COMO, London

With its Louis Vuitton-filled lobby and socialite-studded swimming pool, this lavish hotel is as famous as the guests who frequent it. If you believe the rumors, Orson Welles threw a desk out a window here in a fit of rage and Keith Richards' wife found the mattresses so comfy that she bought a pair to take home. Overlooking famed Copacabana Beach, movie buffs will recognize the ornate architecture of this 1923 Art Deco landmark from Fred Astaire and Ginger Rogers' Flying Down to Rio. More recent guests include Francis Ford Coppola, Helen Mirren, Will Smith and Miley Cyrus. As for what these A-listers have in common, it's the hotel's decadent sixth floor Penthouse Suites.

Top Ski Resorts in the World