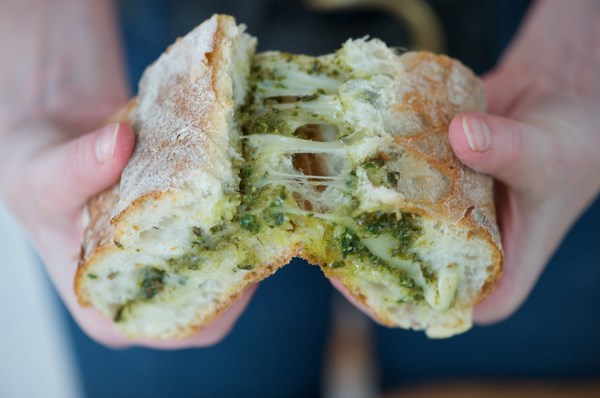 We've all been there.

You're at your favorite sports bar sharing a pitcher with your friends, when all of a sudden, after tasting the salt on your lips from the tequila shot five minutes earlier, it hits you and you realize: holy mother, I'm really, really drunk. Thoughts run through your head. How did this happen so quickly? I have a 9am seminar tomorrow. I need pizza. Is it just me, or does Charlie/Jesse/Blair look smoking hot tonight?

Once you rack up a certain number of tequila shots in a given hour, there may be no hope for you, not even late-night pizza. But if you start your night off the right way, with the right kind of meal, you'll be ready for all the clear liquids in high ball glasses your friends might force your way. (And if all else fails, you can always detox later).

Keep the following food items in mind when gearing up for a night of drinking, and you might just make it to your 9am seminar and not wake up in Charlie/Jesse/Blair's bed wondering what happened.

1. Pizza. Though more commonly thought of as a late night snack, pizza consumption has many more long-term benefits if eaten before midnight. It has two of the best alcohol absorbing ingredients: bread and cheese. Many women watching their waistline will use good sober judgment and skip the pizza for dinner in favor of a salad. But guess who's probably going to be standing in line for an entire pie of BBQ Chicken after the bars close? If you're dieting, late-night eating is the worst thing you can do to your metabolism. Better to eat the pizza first--there will be no need for it later.

2. Falafel. These fried chickpea balls can be incredibly dense and filling without leaving you feeling like you've just housed a five-pound burger. The hummus and tahini in your pita pocket make for much easier digestion than a lot of other ethnic condiments that can aggravate rather than coat your stomach. Better yet, falafel has a ton of protein, which will fuel you well during a long night.

3. Pasta. When it comes to preparing your stomach for drinking, carbs are your best friend. And when it comes to carbs, there is no dish that goes down easier than a simple plate of pasta. If you're prone to acid reflux or heart burn, avoid heavy tomato sauces in favor of one that is cream-based. A classic carbonara is a great option as the egg and cheese fortify along with the noodles.

4. Ice Cream. Unless you are lactose intolerant, a little ice cream goes a long way when alcohol enters the picture. Dairy helps line your stomach and neutralize all the acid you'll be intaking later. It's better for your stomach to add a touch of cream or milk to your coffee if drinking it on an empty stomach. A scoop of ice cream before the bar offers the same kind of reinforcement.

5. Grilled Cheese, or Other Pressed Sandwich. Like pizza, the carbs and dairy in this type of sandwich does double duty. The beauty of a sandwich is also portion control. A plain caprese panini can be smaller and lighter than a greasy slice of pizza or a hefty falafel pocket--if it's enormous, share it with a friend. And because of the main ingredients, a small grilled cheese sandwich can go a lot further than a colossal salad or several rolls of sushi, which do nothing to absorb the alcohol in your system.