For a few years now Google has been making big announcements in the spring, and they've usually revolved around mobile - in 2013, there was the announcement of Enhanced Campaigns, which did away with the old best practice of creating separate desktop and mobile campaigns. Every year since then we've gotten more and more mobile ad types and features, and this year is no different.

Google continues to emphasize mobile-first, which means that the look of the SERP is changing in ways that favor the mobile experience. Of course, paid ads need to adapt to the mobile-first world too, and today Google has announced some new and interesting changes to AdWords, rolling out over the next few months, that PPC marketers need to know about.

Yesterday I flew out to the Google Performance Summit and got an exclusive first look at the newest ad formats and features coming to Google. Here's everything you need to know moving forward about these big changes coming soon to AdWords.

Check out: Industry Reactions to the Big News from #GoogleSummit 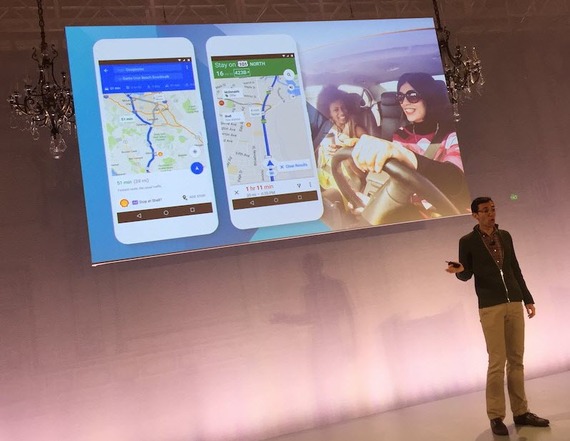 Last month, my colleague Erin Sagin wrote about Google's announcement that Maps would be part of the Search Network moving forward, speculating that "we're likely to see significantly more ads appearing on the maps platform."

She was right. Google had unveiled what it calls the "next generation" of local search ads. These new ads will appear within Google Maps (on the app as well as both the desktop and mobile versions of the site), as well as across Google.com.

In the new ads, brand logos and offers will appear directly on the surface of the map, rather than just alongside the map. For example, if you were to search on Google Maps for [electronics store], you'd see the following: 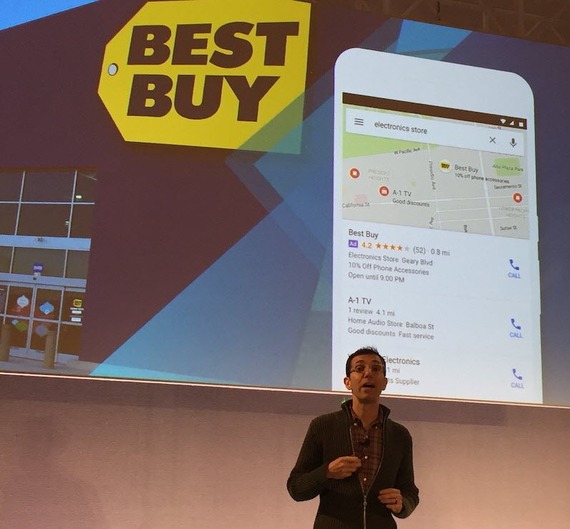 You can clearly see Best Buy's logo on the map. Clicking on that logo leads to this mobile local inventory ad format: 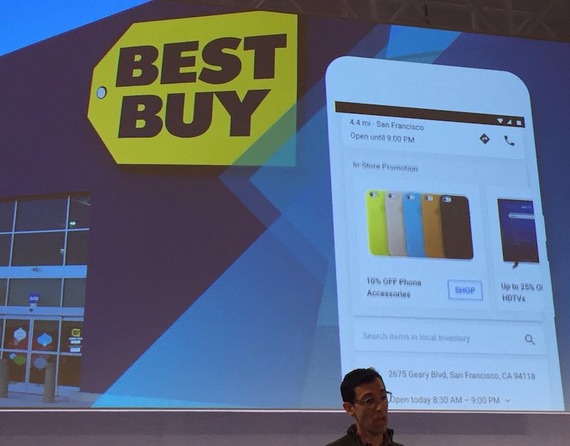 Why the Focus on Google Maps?

Google Maps now has more than a billion users and people visit 1.5 billion destinations based on their Google searches. As Google noted, location-related searches:


To drive more online traffic from Maps to local businesses, Google is working on other new ad formats, such as promotion pins. Here's an example of a promotion from Walgreens: 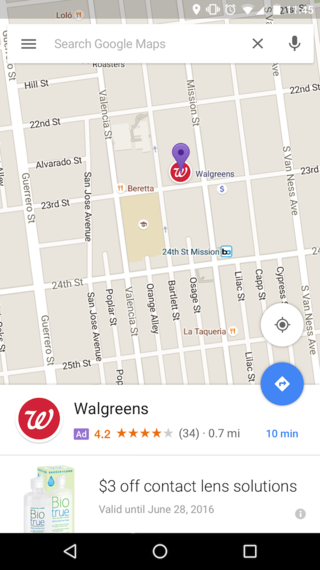 You can see that an offer for $3 off contact lens solution appears right below the map and local store information.

This is a nice integration, giving advertisers the ability to add logos and offers.

However, the ad targeting here is a bit complicated. Ads show based on queries, but Google is also looking at several other context signals (similar to display advertising), such as personal browsing history, similar users, time of day, interests, and behaviors.

This should open up a good amount of local ad inventory. I know I use Google Maps a lot - not as much as search, but when I'm looking for local business I'm equally likely to look on Maps or Search. 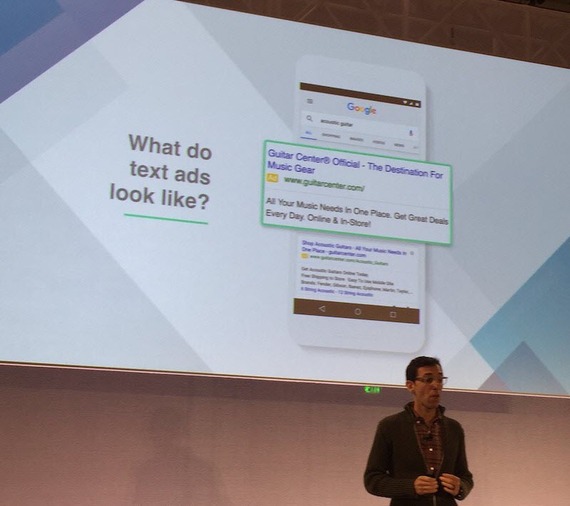 Google eliminated right side ads from the desktop SERP in February as a way to create a more unified Google experience across devices. Now text ads are about to undergo a significant change.

With new, expanded text ads, headlines are about to get much bigger - advertisers will soon be able to have two 30-character headlines, up from a single headline of just 25 characters. In early testing, Google found this change dramatically increased CTR - by as much as 25 percent.

Here's a look at the difference between old ads and new expanded text ads on both mobile and desktop:

At WordStream, we've found that adding an ad extension or call extension to mobile text ads tends to increase CTR by about 12 percent. So it makes complete sense that the CTRs for double headlines would be even higher.

In addition to more clicks, Google said longer headlines will be more useful for advertisers, and result in better qualified traffic for advertisers.

This change is huge - literally. Particularly with so little space on the smartphone screen, this headline change is great news for advertisers (as usual, not so much for those on the organic side). 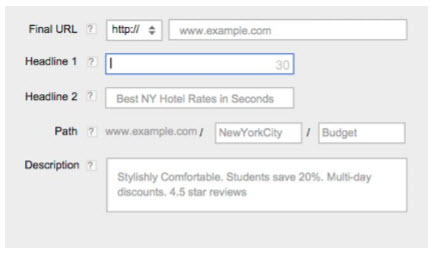 Note that these bigger ads are coming to both mobile AND desktop. You'll want to jump on this opportunity right away rather than let your competitors beat you to the bigger ads.

You can learn more about the new ads in this post: 10 Things You Need to Know About Expanded Text Ads.

You know people are clicking on your AdWords ads and this is driving traffic to your local business, but how much exactly? AdWords can now help more businesses bridge the gap between the digital and physical worlds by measuring in-store conversions.

Technically this isn't "new" (Google says more than 1 billion store visits have been measured so far in the past two years), but it's still a pretty big deal. Soon in-store conversions will become more widely available to more types of businesses, which is critical considering 90 percent of sales will happen in stores, as opposed to online.

The beautiful part is that Google simply looks at phone location history to determine whether the person who searched and clicked on your ad ended up walking into the store.

As an example, Google cited Nissan UK, which discovered 6 percent of people who clicked on ads went to the dealership, resulting in 25x ROI. 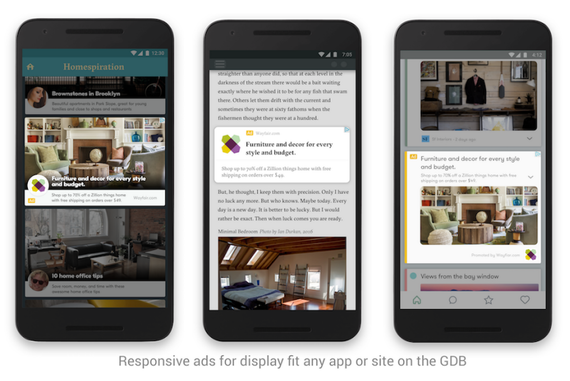 Get ready for Responsive Display Ads. Soon you will just have to give Google a URL, headline, description, and image, and Google will create responsive display ads for you. You will be able to run ads that adapt to the content of the websites they're on and apps in the GDN. This includes native ad inventory.

This is really cool because it's a pain to create ads for all the different formats (skyscraper, leaderboard, square, rectangle, etc). Google is eliminating this hassle with Responsive Display Ads - they will figure out the best format for your ad depending on where it is being served.

Expect all these changes to roll out later this year.

Finally, some changes are coming to the AdWords bidding process.

Currently, advertisers set a base desktop bid and then set mobile bids as a multiplier on the base bid. This was introduced with Enhanced Campaigns. (And tablet is stuck with desktop, something a lot of PPC people have complained about, though tablet searches only account for about 5% of traffic and aren't growing.)

Going forward, this is all being decoupled. You will have the ability to set mobile bids, desktop bids, and tablet bids independently or make them dependent on each other. This gives advertisers a little more flexibility and further enforces Google's mobile-first viewpoint (why start with the desktop bid if everything is moving to mobile-first?).

A Note on the Updated AdWords Interface

At the Performance Summit, Google also revealed an early look at the newly designed AdWords interface, which is coming in 2017. I provide a more in-depth look at the new design and features in this post.

We live in a mobile world. More than 50 percent of the trillions of searches conducted on Google every year come from mobile.

That's why, every year, Google is innovating in mobile to provide a compelling experience for users and make sure advertisers are able to reach consumers at key moments.

At a bare minimum, you'll need to leverage mobile ad formats, and get ready for these new formats on the horizon, to make sure you're attracting and converting mobile searchers when they're using commercial search queries and looking to find a business fast.