Last week, a federal judge struck down California's groundbreaking ban on the sale of foie gras on a technicality: He ruled that foie gras is an "ingredient" and therefore covered by the federal Poultry Products Inspection Act, which state law cannot override. We expect this decision to be overturned after the case progresses. The Los Angeles Times editorialized against the ruling, arguing that "how the liver got enlarged is the result of the bird's handling. And that, we believe, is something the state of California has the right to regulate."

The Times is right, and hopefully, this setback will be as short-lived as the unfortunate ducks who are abused and killed to produce foie gras. But in the meantime, foie gras fanciers, not content just to bathe their arteries in bird fat, are adding insult to injury by trotting out a laundry list of misconceptions, inaccuracies and outright lies about the foie gras industry. They may be able to stomach the force-feeding of birds (for the time being), but don't let them force-feed you such twaddle.

1. Ducks do have a gag reflex.
The thinking seems to be that if ducks don't have a gag reflex, the practice of shoving a metal pipe down their throats three times a day and pumping several pounds of mush into their stomachs is somehow less horrible than it sounds. But this assertion is just plain false. A European Union scientific committee has stated that birds' "oropharyngeal area is particularly sensitive and is physiologically adapted to perform a gag reflex [emphasis added] in order to prevent fluids entering the trachea. Force feeding will have to overcome this reflex and hence the birds may initially find this distressing and injury may result." Undercover investigators have documented ducks on foie gras farms covered with their own vomit. (You can't vomit if you can't gag.) Birds sometimes even aspirate their own vomit and choke to death. Hungry yet? 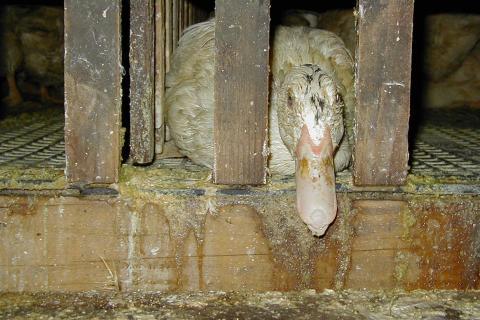 2. Ducks raised for foie gras are not divers.
Moulards, the ducks commonly raised for foie gras, are a cross between Pekin and Muscovy ducks. These are dabbling ducks who forage mainly on grasses, insects and tiny fish and amphibians. They are a totally different species from the diving ducks, cormorants and herons that food bloggers love to show swallowing large fish whole. Slept through Biology 101, did you, foodies? 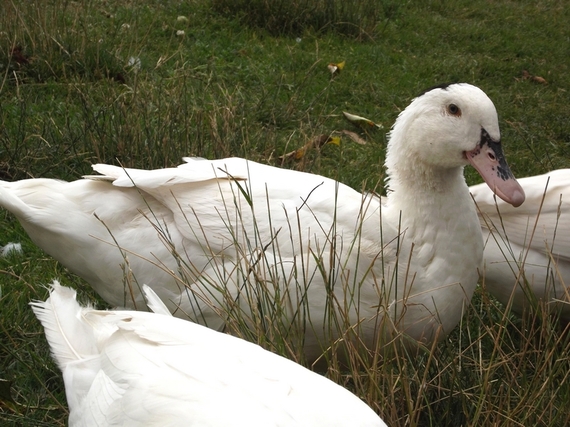 3. Migratory birds do not naturally gorge themselves.
Think about it: When ducks are force-fed to the point that their livers balloon to up to 10 times their normal size, they can barely walk, much less fly. Instead of gorging themselves, migratory birds eat frequent small meals to prepare for migration. These birds are not equipped to metabolize fat at a high rate, and the intended result of force-feeding is actually evidence of the harm: Foie gras is technically fatty liver disease. Moreover, moulards aren't even migratory, so it's back to biology class once again, gourmands. 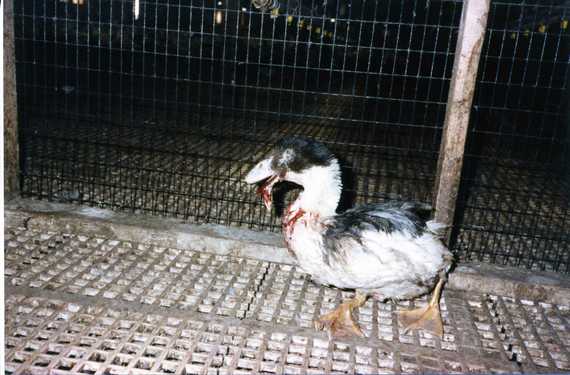 4. Ducks don't love force-feeding.
Investigators have repeatedly documented ducks at foie gras facilities trying to get away from the force-feeders--and then being grabbed by their necks and dragged across the floor for their efforts. Of course, many of the ducks are too ill to move at all. When a duck's liver expands to roughly the size of a football, it causes a cascade of complications, including spleen and blood disorders, kidney disease, respiratory distress and hepatic encephalopathy, a brain disease linked to liver failure. Birds killed for foie gras are only a few months old, yet up to 20 percent of them die of other causes before they can even be slaughtered. 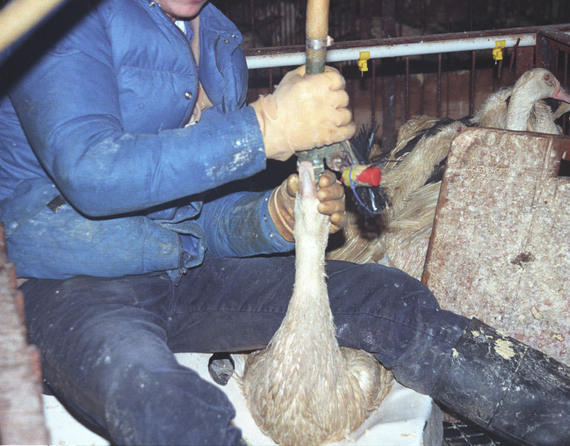 5. Foie gras is never humane.
Seventy-two percent of the foie gras imported into the U.S. comes from Canada, where investigators have documented birds individually confined to shoebox-like cages that virtually immobilize them: They cannot turn around or even spread a single wing. But even "premier" foie gras farms, such as Hudson Valley Foie Gras (HVFG) in New York, are cruel: The Better Business Bureau determined that HVFG's "humane" claims were false advertising. In addition to being cruelly force-fed, ducks at HVFG are confined to crowded barns and pens and denied access to water for swimming, which is vital to the welfare of these aquatic animals.

Poultry experts around the world have condemned the force-feeding of birds. The only people defending it are those who sell and eat foie gras. The scientific consensus on the patent cruelty of this vile product is partly why foie gras production has been outlawed in more than a dozen countries. No one with an ounce of decency should ever buy, serve or eat it.