On a visit to Boston in 2007, the inspiration to write a novel struck me while I was sitting on a bench in the park in Copley Square, drinking my go-to coffee, admiring the Beaux Arts architecture of the Boston Public Library where I used to hang out years ago when I worked at a nearby publishing house. Bam. Happened in the moment I looked up at the frieze around the building, noticed the list of names from literature's hall of fame carved in stone, and flashed back to the Eighties. I had an instant vision of a story I wanted to tell based on those times. 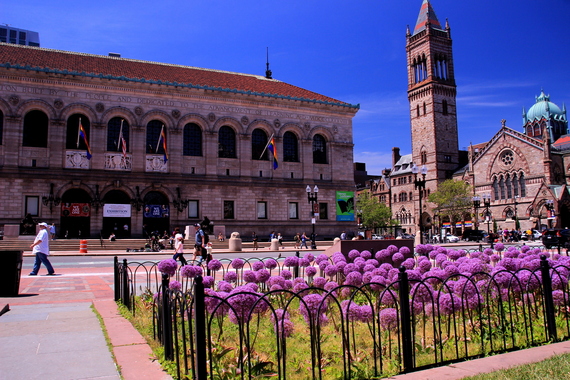 Boston Public Library in Copley Square
(Photo credit: Flickr/Bill Ilott)
Back then I often ate a bag lunch in the same spot in Copley Square. I'd people watch, read, then maybe wander into the library to check out a new book. I'd collide with any number of folks and situations going about my daily business, like a pinball, never knowing whom or what I might bump up against. I loved this daily pinball machine game. Couldn't get enough of being in what felt like the center of the city's life. I'd pop in another quarter. Punch PLAY. Energy flashed. The scene lit up.

Talk about back to the future...

After fifteen years away, I moved back to Boston in 2009 and revisited my favorite spots that I'd included in the novel I'd begun to write--Murder by the Book: A Boston Publishing House Mystery--nudged along by the strange stroke of inspiration I'd experienced that afternoon in 2007 in Copley Square.

My heroine, Frances Paige, works at Harpoon Books--my fictional publishing company. When two authors are murdered, Frances exploits her family's ties to Boston's Irish Mob to solve the crimes. I used the same bench in Copley Square where the inspiration for the novel struck me as the site of Frances's inkling that something isn't right with one of Harpoon's authors. When Frances investigates, she discovers the author--her best friend--has been murdered in her Beacon Hill townhouse. Frances vows to track down the killer and navigates another murder and a kidnapping on her quest before finally confronting the murderer in a harrowing showdown. 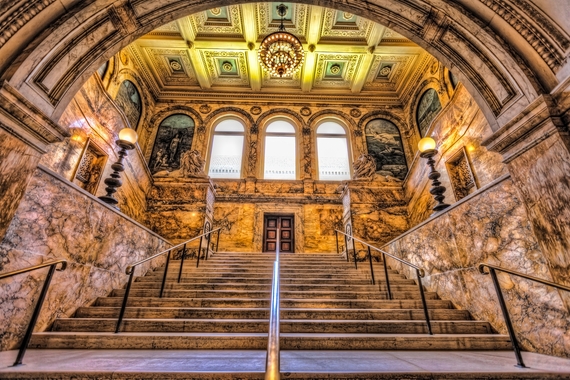 If you visit Copley Square, be sure to peek in the Boston Public Library--my inspiration--and check out the grand entrance, the enchanting courtyard, and, perhaps, the microfilm room--where Frances researches a murder suspect's dark past.

I worked at PWS/Kent Publishing Company in the Eighties on the thirteenth floor of the Statler Office Building, which is now called the Park Plaza Building. My fictional publishing house in Murder by the Book--Harpoon Books--is also on the thirteenth floor in that building, but I retained the old name in the story for old time's sake and for its beautiful architectural features, its flat-iron shape, but mostly for its intriguing, gum-shoe atmosphere--a spot straight out of a 1940s detective novel. 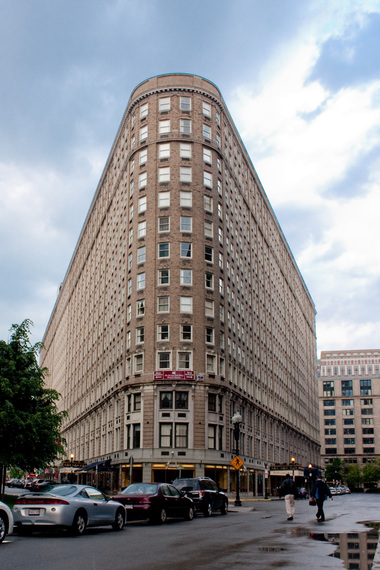 In the book I describe the lobby and the offices as they used to be, although I visited recently, and much was the same, especially the original, gleaming copper trim on the windows and elevators. I used to buy coffee and The Boston Globe at the quirky kiosk in the lobby, but sadly discovered it was torn down to make way for an Au Bon Pain, although I made use of it as the site of a confrontational scene between Frances and a rival publisher.

When I began working in the Statler Building in 1981, the block across the street was occupied by Jack's Joke Shop and The Mousetrap--a dive bar and lounge where some of Boston's finest unsavory characters hung out. Developers soon began scrubbing up the city, trading on its magic, its stories, and those buildings were torn down to make way for the Four Seasons Hotel in 1985.

In Murder by the Book, a shocking event occurs involving the Four Seasons and Harpoon Books that I won't give away here, but perhaps is my metaphor for what happened to that once gritty, but atmospheric, block. Looking back, I've been surprised at how often I unconsciously transposed real events into fictional ones while I was writing the book.

Also back in the day, a corridor ran alongside the old Café Rouge connecting the Statler Building to the Park Plaza Hotel, a route I took hundreds of times on my lunch hour. Toward the end of her journey to solve the murders, Frances takes this route to pick up a Boston Herald in the Park Plaza Hotel's gift shop. On the front page? The story of a suspect's arrest for the murders of the two Harpoon Books authors, one that I reproduced for the book.

If you visit Park Square, check out the row of windows on the thirteenth floor of the Park Plaza Building overlooking the Four Seasons to see the site of Harpoon Books and the scene of the explosive event in the middle of the book.

My real-life book club used to meet after work once a month at a quintessential Boston pub--The Sevens on Charles Street in Beacon Hill. We'd congregate in the nook in the front window, order pints of Harp as honorary Irish, and discuss our latest book pick. 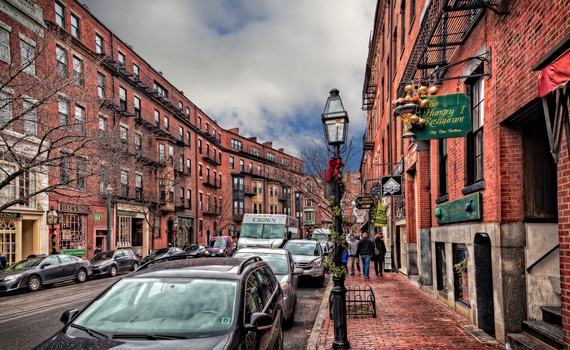 Charles Street/The Sevens in the Middle of the Block
(Photo credit: http://papadunesphotography.smugmug.com)

In Murder by the Book, Frances hangs out at The Sevens, reviewing the details of the murder cases with charming Irish bartender Mackers Moran. The Sevens is the scene of several important meetings between Frances and the various suspects and with fictional Detective Joe Grady of the Boston Police Department, her love interest.

My claim to television fame...

One memorable Wednesday night in the Eighties, a TV crew set up outside The Sevens and corralled my book club into being extras in a crowd scene for "Spenser: For Hire," the popular detective series that was based on Robert B. Parker's Spenser novels. Naturally, as it's my only claim to acting fame, I worked this factoid gem into Murder by the Book.

If you visit The Sevens, be sure to lift a pint of Harp for me.

Then, I highly recommend you follow Charles Street out of Beacon Hill and slip into the Public Garden--a gift box of a park, an Alice Wonderland. Back in the day I'd often spend a delightful lunch hour in the Garden by one of the fairy-tale fountains. 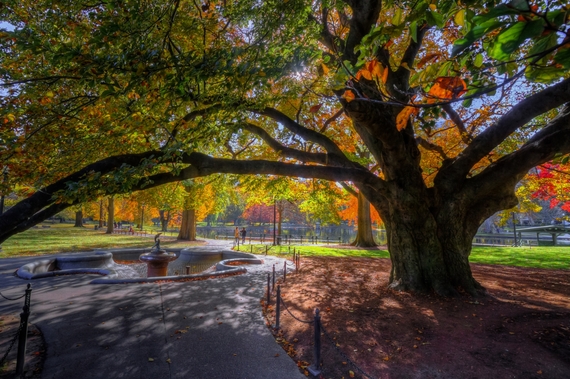 The Spot in the Public Garden Where I Often Ate Lunch
(Photo credit: http://papadunesphotography.smugmug.com)

In Murder by the Book, I often use the Public Garden as a transitional space, a pause in the story, where Frances contemplates the chain of events and tallies the suspects on her quest to solve the mystery of who murdered the Harpoon Books authors. 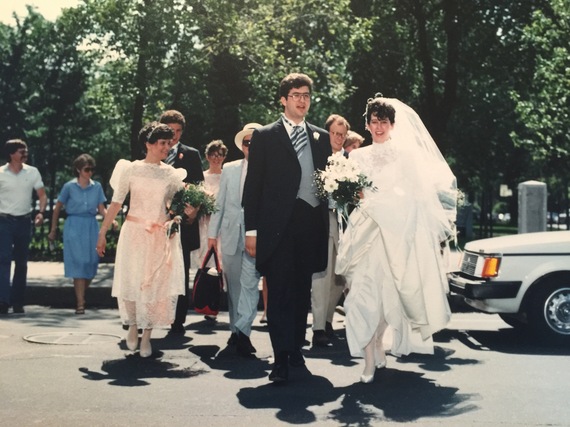 I got married there...
(Photo credit: Bachrach)

In 1985 my husband and I married at a church a couple blocks away on Commonwealth Avenue and had our wedding photos shot in my beloved Public Garden. If you're there on a Saturday, you may see a bride and groom posing for their own iconic pictures. 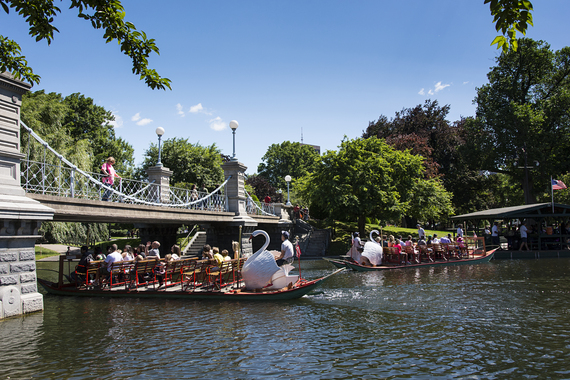 In spring and summer, by all means, hitch a ride on the swan boats in the Garden's romantic lagoon and observe the swans while you soak in the skyline, the magical atmosphere. For me, it doesn't get any better than this in Boston.

The Cafe in Barnes & Noble at Boston University

The cafe in the Barnes & Noble at Boston University in Kenmore Square was my favorite place to hang out over the past several years while I lived across the Charles River in Cambridge.

I wrote the ending and edited much of Murder by the Book there...

So, it inspired a scene near the end of the book. On the verge of unraveling the mystery and exposing the murderer, Frances meets one of her sources in the cafe--a drug-dealing fisherman from Gloucester named Sean O'Connor. She convinces him to help her confront a suspect she believes is the murderer of Harpoon's authors. He goes along with her plan, and--later that day--they corner the murderer and alert Detective Grady...

If you need a respite from the hustle and bustle of Kenmore Square, especially if there's a Red Sox game going on at nearby Fenway Park, then this cafe is the perfect spot to have a latte à la Frances.

Bound in a memory scrapbook, the people and places I knew in the Eighties inspired me to create scenes around the city, so I hope I was able to make Boston come alive as a character in Murder by the Book.

If you visit, perhaps bring my new book, which has just been published by a small press in Boston, with you to Copley Square and take a break on a bench with a cup of coffee. I highly recommend the setting as inspiration--that magical inkling that strikes when you least expect it. Perhaps it'll charm you as it did me into conjuring up characters and scenes, a new idea, or even a new life that you never imagined before.

Thank you so much for coming along with me on this fictional tour of my beloved Boston!