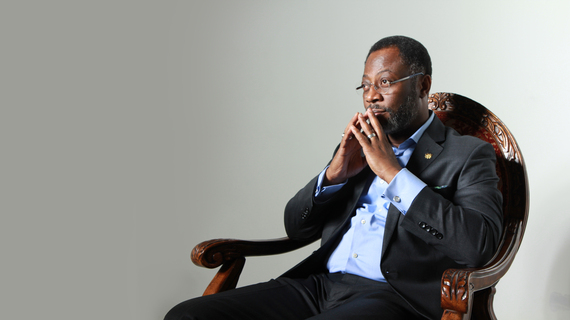 As Black America begins to tap into a new consciousness of our identity, much of that is owed to Africa. We haven't had much conversation about our cross-continental relationship with the Motherland as a collective unit, and that baffles me. Still in 2016, much of the misperceptions of African life and our ancestry still runs rampant.

While the political climate of American sees deep divides within ideologies, ethnicities, gender, and class -- I could not help but think about the African diaspora and what this all means for my future.

Recently, I had the opportunity to reconnect with a mentor and scholar whose cross-cultural wisdom of the Motherland reshaped my purpose in invoking it into my everyday consciousness.

Dr. Kingsley Fletcher is a humanitarian, businessman, scholar and Ghanaian leader who's devoted his life to reshaping the narratives that deter progress and reconnection amongst displaced souls in the diaspora. In the midst of this highly competitive national election, I couldn't help but take my mind off politics for a second and think about Africa. I got the opportunity to speak with Dr. Fletcher earlier this month about his experiences and words of advice to Black Americans who are consciously committed to revitalizing their understanding of Africa.

Here's some of the brilliant messages that I learned from that conversation:

Since birth, I can't begin to recount how many times I saw Africa depicted as a needy continent desperate for international welfare. "People come, volunteer temporarily, and leave," Fletcher says. "That isn't sustainable or helping the problem at all." He's right. So much of the "voluntourism" that has plagued the continent has not eradicated many of the issues are still affecting the continent. In fact, some have argued that it has now become more exploitative, than beneficial. "You want to help Africa, invest in it," Fletcher recommends. "Build smart business relationships with industries in the countries that resonate with you." And if you're not necessarily an entrepreneur or venture capitalist, you can still contribute your support by purchasing and promoting 100% African owned businesses worldwide.

My first trip to Africa forever taught me the true difference of being black in America. The experience would forever shape the way I thought about the continent and my contributions to it. "Many black America see Africa as another place outside of them...little do they know there's a mutual desire to connect," Fletcher says. As I watch many of my friends plan their summer travel, I can't help but push them to explore a country in a continent I now consider my second home. "If one really wants to understand themselves and know what it's like to see their heritage, Africa is the first start," Fletcher says. "Why travel another continent where you're the minority, come see what it's like to feel included."

3) "One should not rely on European validation to embrace their African heritage."

The discussion of cultural appropriation has run rampant in recent years as much of white pop culture has been under the microscope of taking blackness and positioning it as its own. "It surprises me how much people are now talking about because white people are trying to take it," Fletcher says. "We have always been great, intellectual, talented, and beautiful...one doesn't need the new colonial efforts of European ideals to tell us that." He makes a solid point. Our African heritage and blackness shouldn't only be celebrated in times of contention with culture vultures. "We should feel our black even when others aren't looking," Fletcher says. "It is a reflection of our values, of ourselves."

4) "Africa could teach America a thing or two about interfaith political relations."

As the political climate of the presidential campaign build up in America, the religious divides have taken its toll as well. An unqualified GOP candidate who doesn't deserved to be named has suggested that Muslims be banned from entering the country. Across the political aisle, there has been new legislation that has ignored the religious inclusion of many others outside of Christianity. "If you look at how Africa has been set up, we have always been a place that has embraced Muslims, Christians and many others in politics," Fletcher says. "Countries like Nigeria has had Muslim leaders succeed while Christians have been accepting of that...America needs to reconsider their position on this issue in front of the world." When hearing him speak of this, it's truly hard to imagine having nationally elected Muslims in office with the current political climate. For a nation that prides itself on the First Amendment right of freedom of religion, it could be more interfaith in its political representation.

5) "Blackness shouldn't be looked at as a statement, but a lifestyle."

Too often blackness is seen in a monolith, defined by fashion statements and trends. "Being from Ghana, I know that being black is forever being conscious of the struggle of my people and my ability to make an impact," Fletcher says. "It's not enough just to look the part, we have to do our part." It more ways than one, to be black is to live in a world where everyday your existence requires an audacity of hope. But more than just declaring one's existence, we should all strive to ask ourselves how are we preserving our heritage for the next generation of blacks who shall roam the earth. "It's all about knowing your roots, and planting the seeds," Fletcher says. "You can't simply think that being here for yourself is enough to guarantee saving for another -- you have to live in your blackness as a catalyst of change for others."