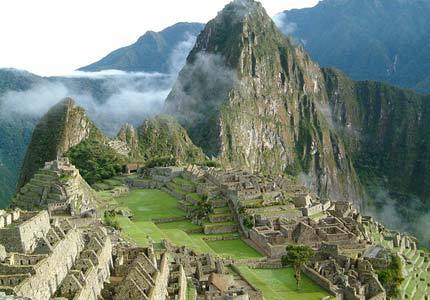 We live in a wild and wondrous world, which means it's time to dust off your passport and get busy exploring Earth's natural treasures and man-made marvels. While hunting down every awe-inspiring landmark would take a lifetime, we've started off with five must-see destinations that should be on everyone's bucket list. From majestic red rock canyons to ancient cities carved out of stone, these one-of-a-kind attractions are sure to excite, inspire and whet your appetite for even more adventure.

Stretching across thousands of miles and passing through 156 counties, the Great Wall of China is the largest cultural relic humans have ever built. It snakes through China ever so majestically, around undulating hills and through vast swaths of countryside. Wall construction began more than 2,000 years ago in an attempt to keep out tribes from the north. The most colorful (and least costly) times to go are spring and autumn -- pink cherry blossoms blanket the landscape outside of Beijing in late-March, and in mid-October, red leaves abound near Badaling National Forest Park.

Learn more about the Great Wall of China

An architectural love letter, this massive marble temple in northern India is one of the most recognizable structures on the planet. It was built in the first half of the 17th century by Mughal emperor Shah Jahan to hold the body of his beloved third wife, Mumtaz Mahal (the building is now a mausoleum for both). The construction took more than 22 years to complete, requiring as many as 20,000 workers. Today, vehicles that emit pollution are not allowed within a mile of the structure, so be prepared to walk or hire a battery-powered vehicle called a tuk tuk.

Learn more about the Taj Mahal

This 500-year-old, pre-Columbian site was once home to the Incas. Before American historian Hiram Bingham publicized his findings of the area in 1911, the mountain-top ruins (8,000 feet above sea level) were widely unknown to anyone living outside of the Cusco Region. Since Spanish colonialists had no idea of Machu Picchu's existence, its architecture and design were preserved. There are two ways up to the "old peak" -- by train or on foot. Unless you're wildly adventurous -- and don't mind a four-day hike up the Inca Trail -- we recommend you go by rail, stay overnight in Aguas Calientes and take an early bus to the ruins to beat the crowds (and in the sweltering summer months, the sun).

If North America's greatest natural wonder -- a red-hued canyon 277 river miles long, 18 miles wide, and one mile deep -- doesn't make your mouth drop in awe, you may want to check your pulse. While the north rim attracts fewer visitors, you'll most likely appreciate the epic vistas of the south rim. There are plenty of spots to pull the car over and have a look, but we recommend trekking along the edge on foot. You can also descend into the canyon's depths via guided hiking excursions, ride a raft down the Colorado River, or even spend the night at a lodge within the park.

Learn more about the Grand Canyon

Chiseled out of pale pink sandstone, the ancient metropolis of Petra is an architectural and engineering marvel nonpareil. Carved more than 2,000 years ago by a nomadic tribe of Arabs, the breathtaking megalith boasts an abundance of awe-inspiring rock facades, formations, tombs and temples. You enter the UNESCO World Heritage Site through the "Siq," a narrow, winding gorge so steep you must crane your neck to see the sky. After about a kilometer, the gorge opens to reveal the massive "Treasury," one of Petra's most famous ruins. Rose-red Petra is stunning at night, when both the Siq and city are lined by thousands of candles, as well as during the golden glow of the late afternoon.

The World's Most Extreme Hotels