When I heard about the Escape Room about a year ago, being slightly claustrophobic, my first thought was - Nope, not spending my leisure time doing that! But it turns out that Escape Room is one of the coolest, most fascinating group activities out there.

The basic concept is that you're locked in a small room that has a number of fiendishly difficult puzzles to solve in order to get out. There are different-themed rooms in many cities across North America. My first, but definitely not last, experience was in London Ontario where I went with my business coach and about twenty entrepreneurs. The experience made a lasting impression! 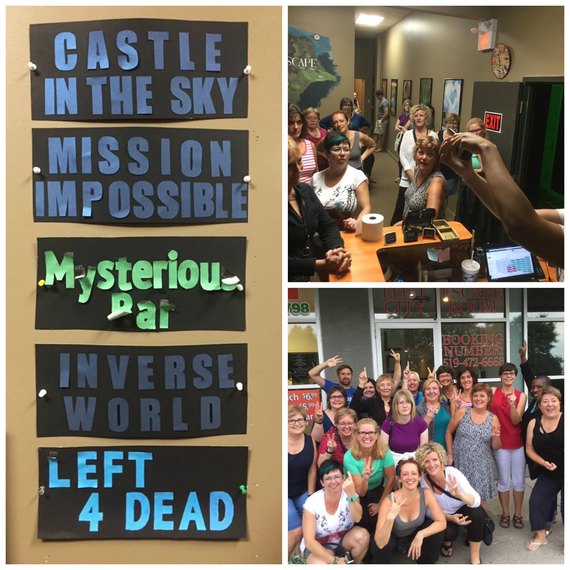 Here are 5 key lessons from Escape Room to leverage in your business:

Our team had Inverse World. We quickly learned that nothing was as it seemed. We had to match fragments of information painted on a mirror with other fragments from various walls behind. There was a half-played chess game hanging from the ceiling that somehow worked in combination with the mirror clues. Once we pieced all of this together, the set of numbers that resulted would unlock a box and give us the next clue. But were the numbers to be read from left to right? Top to bottom? Through the mirror? We had to try many different perspectives before finding the right way to interpret the clues.

How often do you feel stuck growing your business. Instead of doubling down on behaviours that haven't borne fruit in the past, pull back and question the very frame of reference you're using! Talk to people outside your circle for a fresh perspective. Read a book, attend a lecture, visit a museum, watch a movie that will help you to see the whole situation from a different angle. You'll come back refreshed and armed with insights that will break the logjam of where you are.

2. Pull wisdom from every team member.

To solve the clues that got us from the first room into the second, and finally out, we needed the creativity and intelligence of everyone on our team. We had a couple of people who knew Chess, thank goodness, a tall guy who was able to maneuver to see the clues in the mirror, a patient, methodical gal who kept trying one order of numbers after another until that lock finally opened, and spurts of creative 'what if we tried this' ideas from several of us. Full collaboration is what it took to move forward. And what a sense of achievement when the lock opened! The yelling and cheering exploded out of us!

Who on your team aren't you fully leveraging? What's that about? Are you embarrassed to ask for help and ideas? Arrogantly assuming you know all you need to know? Convinced you're right? Simply unaware that you're allowed to get ideas and inspiration from others? Resolve to take advantage of the collective wisdom all around you.

There was an ebb and flow to our efforts. At times we felt really stuck. We failed repeatedly! We tried not just a few, but many sequences and 'what-if's. We had moments of giving up where all of us fell silent and just stared at each other and looked around the room, shoulders slumped until... someone tossed out another tentative hey, what if we tried it this way. The creative juices got flowing again and eventually moved us forward.

With each failure we had more information.

In business we tend to put such heaviness around failure. Our business is our baby. We put our heart and soul into it. Our best efforts, resources and energy. Failures can be painful! But did you know that in order to get onto Dragon's Den (the Canadian version of Shark Tank), you must have lived through at least 3 significant business failures? Three big failures to even be eligible to get on the show. The ability to bounce back from a failure says so many profound things about character, resourcefulness and determination that some of the most successful people in business see it as a key determinant in which businesses ultimately succeed. Embrace your failures and have a process in place to learn from them!

We were in the second room working on the final challenge. The two clues were a picture of billiard balls set up in the triangle, and a second slip of paper with a line drawing of three circles that overlapped. One overlap was yellow, the other one green. I was head-down with another person, comparing the order of billiard balls while a third gal was trying the number sequences on the final lock. We struck out again, and again and again. The answer felt seconds away. Then one of the quieter gals on the team said 'what if it's about the colour wheel?' I groaned. I admit it. I was so committed to our present course that I completely discounted her suggestion. The clock ran out without our nailing the final clue. The door opened because the game was over, not because we succeeded.

And guess what. She was right. I'm so grateful this happened, because I'll never forget that my discounting her suggestion lost us the game.

Where might you be doing that in your business? Intentionally listen for the quieter voices around you. They have valuable insights to contribute.

5. Keep your sense of humour!

In Escape Room, we were all dead-focused on solving those clues but we brought a light-hearted attitude to the whole thing. After all, it's only a game! We laughed, we muttered some gallows humour at times (we're never getting out of here...they'll crack open the doors and find our dead bodies... ) and it allowed us to keep moving forward.

Yes, business can be serious at times, but it doesn't have to constantly feel that way. Laughter and humour actually send endorphins to the brain. Holding the day's tasks lightly reduces anxiety and brings more joy to the whole journey. Surround yourself with positive people who know how to laugh at themselves!

Excuse me, now. I have to go and book another Escape Room adventure!