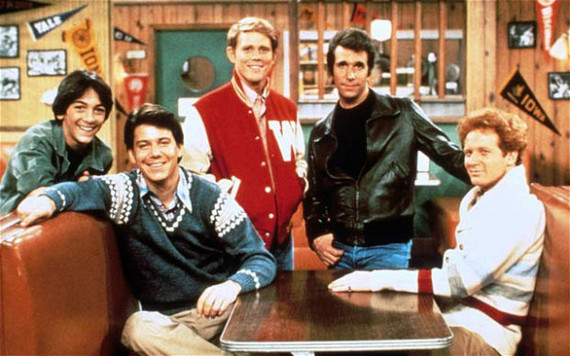 We've all heard them said in everyday conversation, but do any of you really know where these iconic catchphrases came from? We've compiled a list of the five most popular catchphrases that you probably didn't know originated from the 70s TV show Happy Days.

We all remember in every episode that the writers would have Richie Cunningham get his gerbil's exercise ball covered in mud. The mud, if not cleaned immediately, would then harden and Richie would frantically look over to his friends for advice on how to knock out the dried up mud that was beginning to cover the air-holes on the ball. As this scenario became a staple in the Happy Days series, so did the iconic phrase that they would always retort: "Shove a rock through it, ging!"

Local diner owner, Al, used to love walking around his restaurant with a stuffed cat in his pocket and strategically placing it by the main door for the purpose of scaring off patrons of foreign descent. When other customers would glare disapprovingly at him for being a bona fide racist, Al would feign ignorance and accusingly yell towards his customers, "Who's cat is this!?"

3. "Wait, what was that? Did I hear something in the attic? There it is again. Oh wait, never mind. It was probably my imagination."

Probably the most well-known Happy Days catchphrase was this one which was always spoken by Henry Winkler's character, Fonzie, every time a street-begger would ask him for change.

Who could ever forget this chauvinistic phrase Potzie would always utter whenever he saw a waitress who was over the age of 35. I can't think of a more apropos quote to accurately condense the show's 11-season run.

Remember that one time Marion and Howard decided to re-decorate their home for half an episode? Of course you do. What originated as an organic line between husband and wife eventually seeped its way into the heart, and lexicon, of American families everywhere. It's hard to go to any home improvement store these days and not hear at least one couple give a well-deserved tribute to the catchphrase that really put Happy Days on the map.