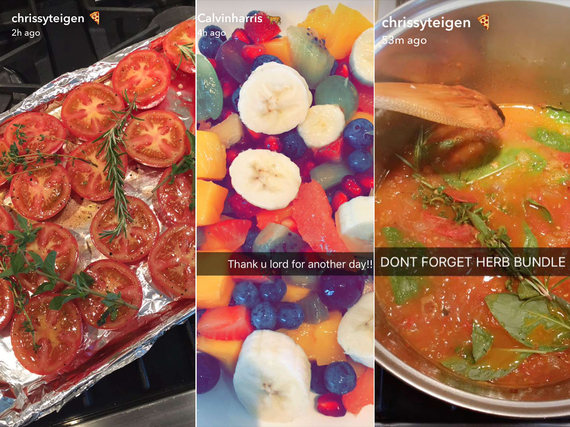 What's it like to watch a Snapchat story of someone cooking a meal? Think Food Network but with no instructions and videos that disappear after the 24-hour time window expires. There's absolutely no value beyond the instant gratification of looking at food.

Here's one way to make it a little more interesting though: Throw a famous supermodel or a multiplatinum DJ into the mix. Celebrities are now taking to the strange-but-addicting social media outlet not just to share flashy outfits and equally exciting friends but also their culinary creations. Get your phone out and start following these five food-loving stars.

① Gigi Hadid (itsgigihadid)
Just when we thought it was going out of style to abbreviate all your words, the model brought "spag bol" to the table and changed everything. She prefaced this plate of pasta with a precooking snap, which had a guest appearance of Questlove's book in the corner. It also showed that she keeps her knife block on one of her stove burners, which makes me feel slightly concerned for the safety of everyone involved. 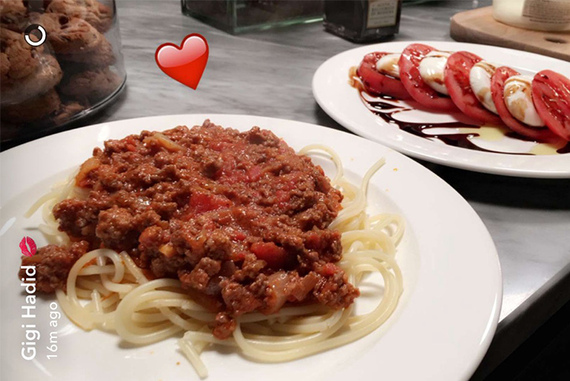 ② Rick Ross (ferrarifatboy)
Welcome to "RossFit," a weight-loss program that includes mild attempts at fruit and videos of the rapper doing reps at the gym. This plan also includes plenty of Bello cigars, so its efficacy is dubious.

③ Calvin Harris (calvinharris)
The guy is hilariously obsessed with cauliflower. There was a one-week period when I spent at least a minute a day watching him make a vegetable stir-fry with tons of cauliflower. Although in 2012 he claimed to not like the cruciferous champ, the Scottish DJ recently snapped the whole process of making a cauliflower-heavy meal to the relaxing melodies of Young Thug. He also enjoys fruit and inspirational quotes.

④ Chrissy Teigen (chrissyteigen)
It's not surprising considering her recent cookbook release and cake-filled Instagram account, but Teigen is taking her supermodel recipes to Snapchat. She will also aggressively make sure you never forget your herb bundle. Taste testers include John Legend and her adorable dogs.

RELATED Why You Should Buy Chrissy Teigen's New Cookbook »

⑤ DJ Khaled (djkhaled305)
He's perhaps Snapchat's most beloved person to follow. He's another rapper getting fit (bless up), so expect to see him riding a stationary bike for 80 percent of the stories he posts, while also peppering in plenty of culinary gems. Small caveat: The egg white feasts are actually thanks to Chef Dee, his personal chef. Major key.

Related Articles:
Celebrities Turned into Food Puns, Because Why Not?
Cook Your Way Through Chrissy Teigen's Cookbook