It's taken a lot to get to the place where I can accept the imperfections of parenting. I say that because I'm a Type A, control freak... or at least I was. I'm probably better known as a perfectionist to many of my friends and family. I love organization, schedules, planning, and post-it notes. I still do love these things, but I cannot hold them as tightly to my chest as I once did.

Before I had my twins, I had nannied in NYC and LA and had a ton of child rearing experience. Each parent had their own set of rules, and I was happy to oblige. That was my job. While I probably agreed with most of their rules, I always thought about how I would do things similarly or different when I had my own kids. The truth is, you can set all the rules you want before becoming a parent, but when the little monsters arrive, sometimes sh*t just happens that you cannot control and this is when you need to learn to let go and accept those imperfections. These are just a few of my imperfect parenting confessions. 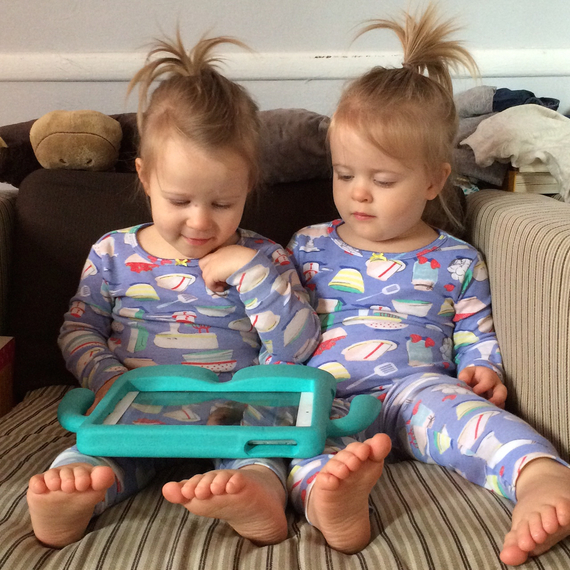 1. I let them watch television.

I said I would NEVER let my kids watch TV. Even though I have made a living in the entertainment industry, I firmly said, "My kids will never watch TV!" Bahahahahaha! Let me tell you, as a mom of almost 2-year-old twins, I can't get sh*t done unless I let them watch Tumble Leaf on Amazon or Elmo on Sesame Street. It's not like I let them watch TV all day even though there are days I am tempted to let them. But there are times when I have to make a meal or clean the kitchen or put laundry away or eat my breakfast and they are BOTH clinging to me like wild monkeys to a tree. When there are two kids who want to sit on top of you 24/7 or won't give you a moment to breath, you are more than happy to find the iPad or click the TV on to their favorite furry friends. I'll admit that when they are in a mood and won't stop b*tching for no reason at all, I will say, "Want to watch Big Bird?" And when they both stop screaming and yell, "Yeah! Yeah! Yeah!" I breathe a sigh of relief knowing that some much-needed adult peace time is coming.

2. I let them eat food off the floor.

I was a huge germophobe before I had kids: the kind that won't open doors or hold the railing on an escalator. I was so paranoid about germs that I carried hand sanitizer wherever I went. I still do, but it's different. I thought I would never let my kids eat food off the floor or touch anything I hadn't properly sanitized ahead of time. The thought would make me shutter. But as soon as my girls started crawling, then walking, and those hands touched the ground and everything in site, it became acutely clear that there wasn't enough sanitizer on the planet to keep these girls away from the germs of society. So yeah, if they drop food on the floor and the floor is not too unsightly, I pick it up and give it right back to them. And likewise, they will often feed me something they just picked off the floor with their grubby hands. So now we're all filthy, floor -- eating monsters and mommy is no longer a germophobe.

I'm not a perfect parent. I don't always say the right thing. Sometimes I forget that these little monkeys I live with act like parakeets -- repeating everything I say. Both my husband and I are guilty of this. For example, (and do I really need to give an example?) we might be trying to do something and it doesn't work and the "F" word will come right out with such an exclamation that I can understand why the girls want to repeat it. It makes such a firm statement as it rolls off the tongue that little minds are drawn to its intensity. I too am drawn to it as it encompasses every bit of emotion I am feeling at the time. Likewise, I am notorious for saying "oh sh*t" when I drop something, especially if it spills all over the floor. This phrase has been repeated by one of my twins multiple times when she too has dropped her favorite rabbit out of her crib or spilled milk on her shirt. I have to say; she uses the phrase appropriately. And since I'm confessing here about my imperfect parenting, I will openly admit that I have laughed on more than one occasion at hearing either one of my girls utter these profanities. Some of my other imperfect parenting friends tell me in a couple years, I can make a swear jar that the girls can put money in each time mom and dad say a bad word. I have a feeling a good portion of their college will be paid from this swear jar.

4. I let them brush their own teeth.

I'm going come clean here; we waited a little late in the game to start the routine of brushing teeth. Don't get me wrong, we tried early on, but it was a nightmare. Trying to get twins to let us brush their teeth just wasn't in the cards for us. It was a battle we couldn't win, and a battle I got too tired to fight. They are both so physically strong that we couldn't even get the toothbrush in their mouths, and they screamed at us simultaneously. Since I feed them organic food, don't let them have any processed sugar, and I read the sugar labels on everything we buy, I felt I might get a hall pass with this task -- at least for a little while. But once all the teeth were in, Jason and I had to figure this conundrum out. Girlfriends were telling me that they themselves brush their little ones' teeth. I thought, "This is never going to happen for us. No way will they let us ever brush their teeth for them." So I resorted to my trusty iPad for some YouTube searching and found that low and behold, Elmo had a tooth brushing song in the funkiest, hip-hop version that was sure to dazzle and tame the wild beasts. So now, every night, the iPad is in the bathroom with Elmo rapping and my girls with not one but two toothbrushes -- one for each hand. It's not perfect brushing. I know we should be getting in their and scrubbing those pearly whites for them, but this is the best we can do for now.

5. Nothing is in its proper place.

I like things organized. I like things put in their place. I hate dishes so much that I clean as I cook and won't sit down for a meal until the pots are drying. Ok, I know that sounds nuts, but I can't stand having a lovely meal only to come back into the kitchen and have a ton of dishes to do. And toys should be categorized and put in their respective bins: balls in this basket, Legos in that basket, tea party toys in here, and ABC blocks in there. Crap needs to be off the floor and dirty clothes need to be in the laundry basket. None, I repeat, none of these things are happening. My place looks more like an episode out of HOARDERS because no matter how much I try and be organized my world has been taken over by 2-year-old twins who have a completely different living aesthetic than I do. And because they outnumber me and are much faster at their destruction, all efforts to maintain visual sanity has been thwarted. I have gotten so tired of apologizing to friends and family that pop by that I have decided to embrace this as my new found world until the repetition of "pick it up! pick it up! pick it up!" finally sinks into the heads of these vicious wild animals, I call my beautiful little girls.

More:
Toddlersparenting adviceparents-toddlersparenting humorMoms
Newsletter Sign Up
Raise the kind of person you'd like to know
Subscribe to our parenting newsletter.
Successfully Subscribed!
Realness delivered to your inbox