5 Enemies to Transformative Change
In engineering education there are a number of enemies to effective transformative change. Here we consider five:

Each is discussed briefly in turn.

Enemy 1: Thinking the Existing Organization Can Transform
The first enemy is a bit surprising, but it is the mother of all change obstacles. Leaders of colleges and universities undergoing change have seen their organizations adapt in effective ways to the small orders they issue, so they naturally believe that larger orders for transformative change can also be followed. This assumption is unwarranted.

Universities are ancient institutions dating back to the 11th century. Their form is designed to change unresponsively and slowly and to conserve hard fought knowledge won at no small cost. As such, rapid, effective large scale transformative change is beyond the capability of universities without substantial process and culture reform.

Enemy 2: Mistaking Lists for Change Initiatives
The next enemy to effective change is the making of lists of content or curriculum items to change. Many reports have been written suggesting this or that change in engineering education, usually as a list of changes in characteristics, curriculum topics, or pedagogy. Finally after page after page as to what should be changed, the author writes a page or two about how this might be accomplished, but these later sections are short on detail and long on leaving the real change process determination to the reader. Lists give a false sense of accomplishment.

Enemy 3: Tick-the-Box Change Response
After an administrator has encountered the first two enemies, he or she hands a list of orders to the existing organization through the normal chain in command. Administrators down the pecking order look at the list of orders, recognize that they are beyond the capability of their units to actually implement them in anything like the original spirit, so then there are only two reasonable responses. First, the lower-level administrator can send the change to the curriculum committee (addressed in a moment) for what we will be almost certain death, or he/she can declare victory by preparing a rich response that combines sophisticated reporting with a modicum of compliance. In Singapore, we call this tick-the-box change or in the States we would call it check-the-box change.

In tick-the-box change, the administrator receiving a transformative change order, looks at it, and knows that he or she is running an organization incapable of changing in the manner request. So the following response is clever, elegant in its own way. The administrator says "yes sir" and reports back how the status quo or a minimally modified status quo can be made to fit the transformative change order in several years. These "change efforts" are undertaken, not in the spirit of making the change desired, but instead in a mode of minimal compliance. Oftentimes they are accompanied by sophisticated reporting with detailed data collection and statistical reporting, which is used to show how the orders are being followed, box by ticked box. Of course, such responses generate lots of extra paper and effort, but they don't bring about much in the way of real change.

Enemy 4: NIMBY Committees and Logrolling
Another option an administrator has is to send the change proposal to his/her curriculum committee for review. There, progressive-talking faculty members receive the proposals for transformative change with open arms, almost a sense of bonhomie. They say, "Oh yes, progressive transformative change is great!!" and then almost immediately add, "...just don't change my course." And thereafter, logrolling whispers in the committee room work their magic: "If you vote not to change my course, I'll vote not to change yours," and in short order the proposal is roundly rejected and sent back whence it came.

We call this a NIMBY maneuver because it analogizes the siting of a nuclear power plant ("not in my backyard") to the transformative change proposal ("not in my course").

Enemy 5: Mistaking Professorial Effort for Transformative Change
The last enemy of transformative change is the mistaking of professor heat for student light. In the usual change initiative we exhort faculty to "work harder" (said with an Austrian accent by someone with big muscles looking a lot like Arnold Schwarzenegger). See the curve of faculty cost vs. student engagement curve below: 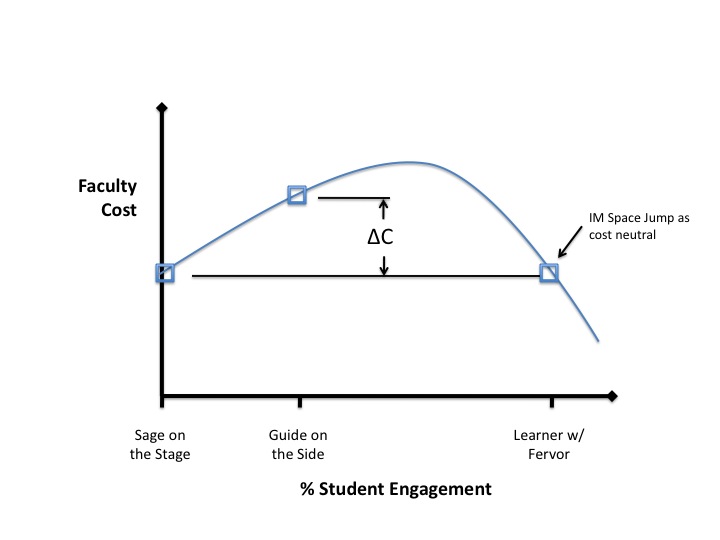 The current state is imagined to be with low student engagement, labeled as the "sage on the stage" and with relatively low faculty cost. We add a problem-based learning technique or an experiential learning parlor trick to the mix and we ask the faculty member to get increased %student engagement through the Delta C of his/her own effort. Of course, with all the pressures of research, service, and existing teaching, these exhortations are resisted, and thus, the widespread failure to adopt all the X learning methods over the last 20 years.

Of course, the failure here is that the whole effort imagines that the prime mover of change is the faculty member, but what if the prime mover were what we got students to do, not what we get the faculty member to do? Then, we could imagine the shape of the curve coming down with increased student engagement to a point where faculty time would be comparable to the status quo. There is indeed evidence that this occurs if we actually try to transform rather than work incrementally, and failing to recognize this causes change initiatives to pursue a logic of faculty effort to the exclusion of other possibilities.

Starting from a Respect for Complexity
These are difficult problems all, and they reflect the complexity of transformative change in higher education. Transforming an ancient institution, with an established culture, particular incentives, established status hierarchy, and so on is no mean feat. Thus, the starting point for effective transformation is to respect that complexity and not to oversimplify the problem. Each of the five enemies is the result of trying to use methods that work for incremental improvement or change in situations calling for something bigger. This recalls Einstein, "Everything should be made as simple as possible, but not simpler."

The first order of business in approaching engineering education change is to stop making it simpler than it is. Let's think more carefully about how we're going to change at the same time we think about what we would like to change. Moreover, such process reflection requires us to think a good bit more about the human dimension of the situation. Who is ready to make these changes and how are we going to develop their leadership and collaborative capacity for change When we respect this complexity, then and only then, will we be able to start to take on these kind of change initiatives in a manner that has some reasonable chance for success.