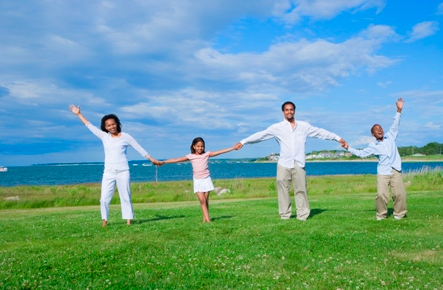 Evidence from both clinical observations and empirical research increasingly confirms that how you engage your entire being in the world significantly impacts your physical, mental, emotional and relationship health. Moreover, each of several life practices enhances the others; they are synergistic. Let's look at some:

Cultivating a positive outlook is associated with a healthier heart and lower incidence of osteoporosis.
This study of 5100 adults from the University of Illinois found that "Individuals with the highest levels of optimism have twice the odds of being in ideal cardiovascular health compared to their more pessimistic counterparts," according to lead author Rosalba Hernandez. And, "This association remains significant, even after adjusting for socio-demographic characteristics and poor mental health."

Similarly, research conducted by the University of Eastern Finland found that post-60 year old women who have higher levels of satisfaction with their lives were found to have higher bone density, and suffer less frequently from osteoporosis than those who are more unsatisfied with life. The study, published in Psychosomatic Medicine, assessed life satisfaction by looking at such factors as "interest in and easiness of life, happiness, and loneliness," as reported in an AAAS summary. Although the study focused on women, men, as well, suffer from osteoporosis; and more significantly, would experience greater overall health with a positive mentality about life.

And still another study finds that people who experience positive emotions also have greater longevity, as do those who express self-determination in life.

Western empirical science is validating the benefits of such Eastern mind-body-spirit practices as meditation and yoga.
Their benefits have been well known to practitioners, but they are now increasingly embraced in the West because the evidence from research makes their benefits more "believable" and acceptable to Western thinking.

Meditation can promote creative thinking. And even of you've never meditated before, according to findings from this study, conducted at Leiden University, published in Mindfulness, that meditation can have a long-lasting effect on your thought processes, including the creation of new, imaginative ideas. Interestingly, though, the study found that enhanced creative thinking was associated only with such meditation practices as mindfulness - observing and acknowledging thoughts and emotions that arise; being receptive to them without "following them." In contrast, an increase of creative thinking was not associated with meditation practices that involve singular concentration on an object.

Yoga practice diminishes anxiety and improves overall mood.This study, led by Boston University researchers and published in the Journal of Alternative and Complementary Medicine, examined brain levels of GABA among participants in a yoga practice of one and a half hours over twelve weeks, compared with other forms of physical movement. Low levels of GABA are associated with higher levels of depression and anxiety. Pre-and post-brain scans showed increased levels of GABA in the yoga participants, and were associated with lower anxiety and a boost of positive mood. According to lead author Chris Streeter, this is the first study to show that increased GABA levels are associated with improved mood and decreased anxiety. It is also the first to demonstrate an association between yoga postures in particular, increased GABA levels and improvements in mood and anxiety.

Diets high in anti-inflammatory foods improve overall physical health and reduce tendencies to respond to stress with depression and anxiety.
A direct relationship exists between diet and brain functioning. Specifically, an anti-inflammatory diet has significant impact upon one's mental state, both cognitively and emotionally. Chronic inflammation is the cause of such illnesses as heart disease, many cancers, and Alzheimer's disease. Certain foods contribute to it, while some substances, such as turmeric, cause significant improvements in cerebrovascular dysfunction.

Focus less on one dimension of your life - work is a prime example - and aim to "grow" other dimensions of yourself.
Doing that enhances your overall "success" with all of them, including productivity at work. I often suggest to business clients -- as well as to some of my psychotherapy patients -- that they create a "life project" in which they commit to personal development within these six interrelated dimensions of life: intellectual, emotional, relational, creative, spiritual and physical. Note that none of these relate explicitly to work and career. But when you do this -- creating new goals or aspirations for each dimension, and taking steps that pull you towards them, you find that it also enhances your effectiveness and productivity at work. You realize how interrelated the different "parts" of your life is.

In a Harvard Business Review article, Stew Friedman of the Wharton School describes research confirming that building an integrated life will, in fact, increase work effectiveness and productivity. Friedman's study has a somewhat different take on the dimensions of life from those I described above, but it confirms the value of bringing "parts" of your life into greater integration and harmony. That leads to a seeming paradox: By giving less focus to your work, you perform better at it. This adds to the evidence that when you seek to develop and "grow" more fully, in all dimensions, it enhances your overall life -- both your inner wellbeing and your outer success.

Consciously altering the structure of your brain diminishes anxiety and depression.
This study looked at the impact of meditation upon regions of the brain associated with stress, empathy and sense of self. Conducted by Harvard researchers, the research found measurable changes in the brain after just an eight-week program. A report of the study in the Harvard Gazette, and published in Psychiatry Research: Neuroimaging, pointed out that the study is the first to document meditation-produced changes over time in the brain's gray matter.

"This study demonstrates that changes in brain structure may underlie some of these reported improvements and that people are not just feeling better because they are spending time relaxing." says study senior author Sara Lazar. And, "It is fascinating to see the brain's plasticity and that, by practicing meditation, we can play an active role in changing the brain and can increase our well-being and quality of life," adds co-author Britta Hölzel.

Similarly, many studies find that you can learn to alter your brain functioning, your consciousness, attitudes, and behavior. And other research data from functional MRIs show that meditative practice strengthens areas of the brain associated with self-regulation of emotions, calm, cognitive focus, and empathy towards others.

Overall, we're seeing Western empirical science steadily confirm what's been observed and known about the mind/body/spirit interconnection within the ancient Eastern traditions. I think the upshot of these recent studies is that how you engage your mind, body and mental/emotional outlook in the world shapes and influences your total system. Your emotional, mental, spiritual and physical states are completely interwoven, along with your life experiences and conditions. We are, indeed, one bio-psycho-spiritual-social being.