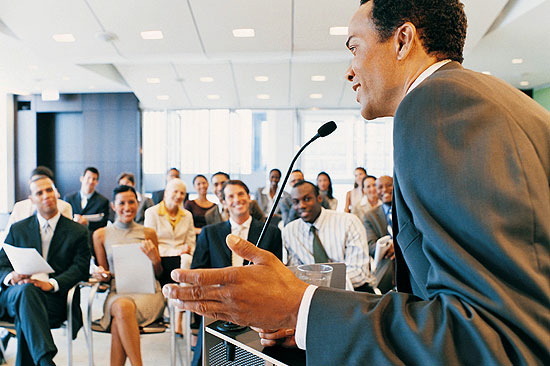 We've all been there: hours, minutes, maybe even moments away from giving a presentation or speech to a large audience. Maybe you've done this a few times before, maybe it's a completely new thing -- but regardless, you're probably feeling some nerves.

It's perfectly normal to feel nervous before you give a speech to an audience. On the other hand, you're likely feeling nervous due to some doubt deep down on whether you can give an effective speech or not.

So the hours shrink into minutes and the minutes into moments and the moments into your name getting announced. Your name's announced and the crowd cheers and then silence ensues. It's during these moments of silence that you'll be glad you can fall back on the knowledge you learned from these five essential reads on public speaking.

Prepare to be enlightened below.

1. Lend Me Your Ears: All You Need to Know About Making Speeches and Presentations by Max Atkinson
A longtime communications researcher, speech coach and consultant, Max Atkinson takes presentations back to an earlier age in his book "Lend Me Your Ears". This is an age where PowerPoint hadn't yet swallowed up its audience's attention spans, and simple rhetoric by an authoritative speaker was all that was needed to get audiences hooked.

Though Atkinson initially shuns modern visual aids, he still talks about software and how to use it more effectively. He equally provides insightful gleans into body language and non-verbal communication. This read is a true primer for anyone with public speaking needs (both casual and serious) in the future.

Scott cites various experiences from his 15 year speaking career. They include battles won and disaster stories that'll make your speaking situation seem like a breeze by comparison. If you want to be able to articulate your ideas and perspective to people in as simple and accurate a way as possible, this is a great book to turn to.

Berkun's part-instructional, part-confessional style lends to all the straightforward speaking tips you need. It will contextually show you how those tips work (or don't work) to deliver a speech that resonates with an audience.

3. The Quick and Easy Way to Effective Speaking by Dale Carnegie
Most of us are aware of the self-improvement messiah, Dale Carnegie, and his 1936 smash of a self-help book "How to Win Friends and Influence People." But that wasn't Carnegie's only gem. His example-heavy prose in "The Quick and Easy Way to Effective Public Speaking" gets right to the root of the matter in allowing readers to truly understand the plight, and way out, of public speaking.

Even if you're not planning on giving a lot of public speeches or presentations, this book can be easily translated to success in the daily interactions we all have in our personal and work lives.

4. The Presentation Coach: Bare Knuckle Brilliance for Every Presenter by Graham Davies
Graham Davies is on your side. He understands that speeches and presentations equate to death in a lot of peoples' minds. He also understands the audience feels the same way in the majority of circumstances. So what does he do? He takes his 25 years of experience in coaching politicians, entertainers and business leaders to weave you through the dilemma of presenting via a humorous, direct style of writing.

Graham addresses scenarios as small as one-on-one meetings to small boardrooms and even large speaking events with an audience of thousands. He also goes in-depth on his own Bare Knuckle 5-step process to effective presenting.

"The Presentation Coach" does a great job of eliminating boring presentation fodder and getting straight to the heart of what effective presenting means. Get ready to learn while being thoroughly entertained.

Duarte argues that a presentation is worthless if it doesn't incite the audience toward some form of action. Speeches and presentations should be geared towards evoking a certain passion through persuasion that can only end in a meaningful purpose, according to Duarte.

Heavily reliant on the use of storytelling, and positioning the audience as the central figure in that story, Duarte believes a speaker's job is to motivate the audience to act, not suffocate them in information they don't know what to do with. Sounds simple, right? You should still read the book.

The next time you have a speech or presentation coming up and you're sweating bullets about it, lock yourself in a room and gorge on these five reads. You'll finally have another trick up your sleeve beside your newfound ability to embed YouTube video in PowerPoint. Most of all you'll feel more confident and equipped to not only entertain and engage your audience, but to rally them behind your cause in the process.