Draw a picture of a time you've witnessed discrimination. Walk across this line if you agree with the ideals of feminism. Discuss who tends to do the chores in the family and why.

Can you imagine a workspace where co-workers are honest enough to take on issues like these? That's what we aimed to do at an Oxfam America workshop on gender equality that I recently attended in Senegal. Oxfam believes in putting women's rights at the heart of all we do, which is why we partnered up with Gender at Work in a global project to promote women's participation and empowerment.

In my job, I spend a lot of time discussing technical aspects of gender in development, using terms like "power analysis" and "theories of change." Through exercises like the ones above, however, I remember that change starts with individual actions and how we treat people on a day-to-day basis.

Here are 5 simple, yet unexpected ways we can all support gender equality in our everyday lives:

1. Encourage the kids in your life to play as they wish

If you go to any toy store, the section marked for boys has sporting equipment, action figures and race cars. The section for girls? Princess dolls and play vanity sets. What messages do we send when these are the general choices we give our kids?

A viral Christmas video, above, depicts a 4-year-old girl's frustration (however adorable) over how a store's "girls" section was full of pink toys and the "boys" section was full of blue toys. She wishes the two genders could buy both colors. Let's take a moment to challenge our own stereotypes of what toys our sons or daughters playing with. Even the Obamas are breaking down stereotypes too!

2. Support films and media with women as leads and directors

From 2002-2012, less than 5 percent of the top 100 box-office domestic releases were directed by women. The lack of representation in mainstream Hollywood has warranted attention and concern from average moviegoers to celebrities like Ben Affleck. Reese Witherspoon started a production company because of the lack of women as the lead star in movies. The result? Her movies Gone Girl and Wild, based on a true story of Cheryl Strayed hiking 1,000 miles alone on the Pacific Coast Trail, received accolades and Oscar nominations.

The organization Miss Representation works to also combat harmful stereotypes and sexism in the media. You can join 100,000 others and sign the pledge here.

3. Stand up to street harassment 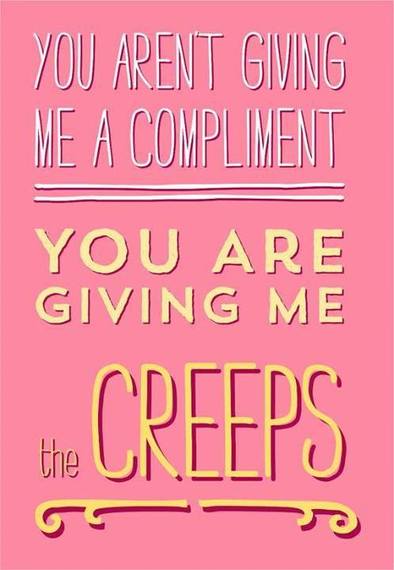 Some studies show that 80 to 90 percent of women have been harassed in public. Not okay. Luckily in today's world of social media, local activists in 84 cities and 25 countries have powered together to grow Hollaback!, a movement to end street harassment. They've even made simple infographics on how to respond to street harassment if you experience it yourself (taking into account safety first!) and what you can do as a bystander if you witness catcalling on the street.

4) Include boys and men in the conversation 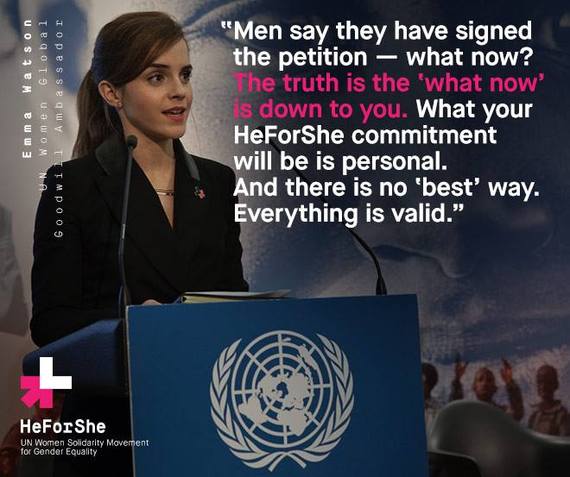 A common misnomer is that gender equality only means focusing on women, but as the name implies, it's about equality of the genders. Both men and boys need to be included in the conversation and more so, be advocates of change for themselves and the others around them. In her popular September 2014 speech at the United Nations Headquarters in New York, Actress and UN Women Global Goodwill Ambassador Emma Watson officially launched the HeForShe Campaign calling on everyone to participate in the fight against gender inequality. Watson states,

As the HeForShe Commitment states, "Gender equality is not only a women's issue, it is a human rights issue." Make your commitment here today.

5. Use social media to bring attention to gender imbalances

With #gender ratios like this, we're ready to take #genderavenger to the next level: http://t.co/kxAB0PzMuo pic.twitter.com/x1ww8O0vXX

Have you ever read a list about top people in professions and see women barely represented (or no women, in the case of The Economist's Most Influential Economists of 2014)? Attended a concert, conference or event and notice that only male voices are being heard?

Get on that phone and tweet away! Gina Glantz, an Oxfam America board member, recently started Gender Avenger, a "community dedicated to ensuring women are always part of the public dialog." The app allows you to bring attention to those event organizers and article authors of the lack of female representation and #genderavenger is a pretty sweet sounding hashtag to use!

Think social media can't be a real way to create change? Check out how #NotBuyingIt created a movement and the world of advertising in the Super Bowl took notice, addressing sexist advertisements.

These 5 ideas are just a start. What are you going to do today to contribute to gender equality?

A version of this post was originally published on March 3, 2015 on Oxfam America's First-Person Blog.