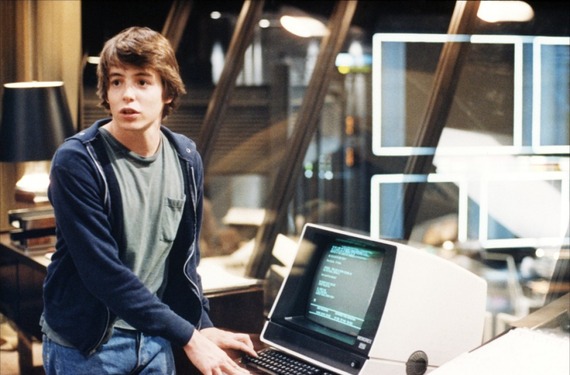 In the real world, hacking gets a bad name, what with it being immoral (except in rare, delightful instances) and illegal. But in the world of cinema, it's a whole 'nother ballgame. Movie hackers are fascinating folks with rich backstories, lofty ambitions, and seriously big obstacles to overcome. And oftentimes they're the good guys, which makes 'em even cooler. Here are five classic hacker movies anyone with a computer will love, whether you're a code-crunching computer geek, a boisterous budding blogger, or a card-carrying neophyte. (And nope, the 1995 movie Hackers didn't make the cut -- it hasn't aged all that well.)

David Lightman (Matthew Broderick) is a high school-aged hacker who unwittingly gets access to a U.S. Defense Department supercomputer. We've all been there -- no biggie, right? The difference here is this nutty computer starts running a war simulation -- one that could actually lead to real-life missile being fired at real-life Russia. Whoopsie. Sure, we're dealing with 1983-era hardware, which looks kinda laughable by today's standards. But the larger messages -- about our over-reliance on technology, war being dumb, etc. -- still resonate nicely. Bonus: unlike most of his roles from that era (Ferris Bueller's Day Off, Ladyhawke), young Broderick doesn't spend half the movie making wiseacre remarks to the camera.

When you think of Mike Judge's classic cult comedy about disgruntled cubicle dwellers, hacking may not immediately spring to mind. But when you peel back the memorable characters, hilariously quotable lines, and man-on-printer violence, this is a movie about three dudes hacking into their tech company. The plan: infect its accounting system with a computer virus that diverts fractions of pennies into a private bank account (they got the idea from Superman III, ya see). If all goes well, quite the nest egg will be accrued over time. Does the hack work? Oh yes -- a bit too well, in fact. Which leads to a whole new set of troubles, including possible prison time. Yep, looks like somebody's about to be hit with a case of the Mondays.

First off, how 'bout that cast? Robert Redford, Sidney Poitier, David Strathairn, Dan Aykroyd, River Phoenix, Ben Kingsley, James Earl Jones -- pretty sweet deal. Ol' Redford plays an electronic security expert (read: badass hacker) who's hired by the NSA to recover a nasty algorithm that can break any encryption code (no es bueno!). One thing leads to another and long story short, Bobby and Co. are the only thing standing between the Western World and a crumbling global economy. High stakes, even higher tension, and a whole lotta breaking into stuff using computer smarts. Bring it awwwn!

Keanu Reeves is Tom Anderson, a.ka. Neo. My man's one heck of a hacker. So much so that he stumbles upon a rather inconvenient truth: our shared existence takes place within a massive computer program run by some alien jerks. Ain't that always the way? So now he's got to, you know, save humanity from these soul-sucking (quite literally) baddies -- partially in meat space, partially inside the computer program they call the Matrix. A worldwide phenomenon upon its 1999 release, this movie turned the hacking genre on its head, making it no longer nerdy to be a pasty dude hunched over a glowing monitor for hours on end. Also, there's kung fu, which Keanu totally knows.

Sure, any Tom, Dick, or Neo can hack into a computer. But it takes a special kind of fellow to hack into somebody's g-darn dreams! That fellow is Dominic Cobb (Leonardo DiCaprio), a thief who commits corporate espionage by infiltrating the subconscious of the heir to a business empire. If Dominic succeeds, he gets his old life back. If he doesn't? Well, he may end up stuck in his target's head for a long, long, long time. The good news: he's got a crack team of accomplices to help things along. The bad news: the memory of his late wife is glitching up the dream mission something fierce. Inception is the thinking man's hacker flick, with a storyline guaranteed to mess with your head (pun intended) for days afterward.