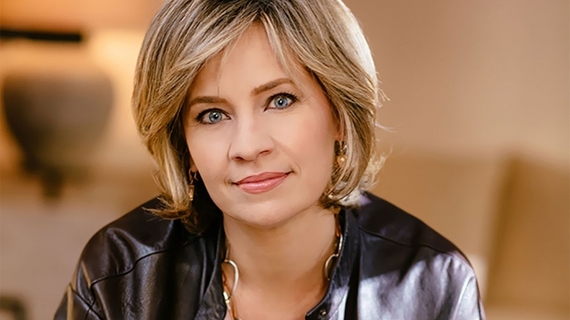 If you want to change the world for the better, it's going to take a lot of money. However, according to philanthropist Jennifer McCrea, money should never be at the center of what you do.

McCrea, who has been called "the billionaire whisperer," has partnered with philanthropists and nonprofit leaders for more than 27 years to raise resources to tackle the world's most pressing problems. She is also a senior research fellow at Harvard's Hauser Institute for Civil Society, where she teaches a course on Exponential Fundraising.

During my recent talk with McCrea, one thing was strikingly clear -- she is passionate about creating a better world. In her work, she has shifted the way we look at fundraising and philanthropy and the lessons she gives are relevant to us all.

"If you put money in the center of any relationship, there is a power dynamic inherent in that. Whoever has the money essentially has the power, and whoever is looking for the money is in a submissive position," McCrea elaborated.

"And I think this is true with entrepreneurs. I think it's true with couples, spouses, partners and employers: anytime money is in the center of any relationship, the one with the money has the power."

Follow McCrea's advice and shift the dynamics away from money. Make work the center of your business relationship instead. When work is at the center, "Money just becomes the gas that goes in the car," McCrea explained. "It's not the car, it's not the driver, it's not the destination."

2. Decide whether you are in a job or a calling.

If McCrea could only pass on one piece of advice to aspiring entrepreneurs, it would be to have a fire in your belly about what you do because that fuels your endurance and your courage. "Work will take a lot out of you, but passion will keep you going strong," she said.

She regularly reminds herself that her work is a calling, and that mindset transforms how she views it. Rather than being a drudge, her work becomes her mission. "If you really feel 'of all the things I could be doing, I am called to do this work,' it gives you courage. And this work takes a lot of courage,"' McCrea said.

"It's easy to get burnt out. I feel like if you can constantly remind yourself why you are doing the work, it just makes it so much easier."

3. Stop being your own worst enemy.

It may be hard to see, but chances are, you are causing your own biggest problems.

According to McCrea, "We are our own worst enemies because we are constantly putting up obstacles that are blocking the flow of resources."

She believes that there are ample resources in the world to create change. "The money, time, network, creativity, experiences and moral resources are all there to make the world a better place," she said. "But it all stays inactive because of the obstacles that we put up."

She believes that this trend is true for any endeavor, whether it be a new enterprise, a relationship or a successful organization. "It could all function better if only the roadblocks were removed," she explained.

"The whole challenge is to understand what obstacles we are putting up and remove them. That also goes for our relationship with money."

4. Get over your fear of rejection.

Another major barrier that keeps us from becoming successful is our fear of rejection. "There are so many great ideas and important causes out there, it seems daunting to distinguish yourself," McCrea said. "So take rejection out of the equation. Even if you are initially turned away, see it as an opportunity."

"In my mind, I can't be rejected because, if I am raising money for something like HIV, and your passion is the ocean, I always say, 'Go work on the oceans, that's awesome!'" McCrea said. "You're not rejecting me; that's a victory for our world."

She said that if you approach each person with transparency and show true commitment, that attitude will shine through. And eventually those efforts will pay off.

"Typically, those people will refer people back to me," McCrea said. "They will say, 'HIV is not my thing, but I happen to know a couple of people whose thing it is.'"

5. Use your heart as an instrument of vision.

When McCrea looks at the legacy she hopes to leave behind, the question she asks herself is: "How have I touched people's lives and how have I allowed them to touch mine?"

"Philanthropy isn't a business. The word itself comes from the Greek root that means love. It means services and it means caring for each other," McCrea said.

"That's why, even though there is a lot of money flowing through philanthropy, it has to be grounded in a place where people are using their hearts."

For McCrea, that means using your heart as an instrument of vision. She quoted the saying: "The head hands to the heart." The head is where you create your strategy and the hands are about honing your skills and incorporating your heart.

"The heart is the reservoir for courage," she said. "Without that, that's when ego comes in and that's where you lose your way."

This column was originally published on Entrepreneur.com on August 16, 2016.